During the 2011 Florida Legislative Session lawmakers passed HJR 381, which will put a proposed constitutional amendment on the 2012 general election ballot in November. Passage of the amendment requires that 60% of the voters approve it. Although the specific wording of the amendment has not yet been finalized, it will include two main changes to the current tax code:

Supporters of the bill claim that lowering taxes will increase home sales and stimulate commercial activity. Florida has a large inventory of unsold homes, many of which were built with Snowbirds in mind. By making these homes more affordable, it is expected that Florida’s large inventory will shrink and the price of homes will increase. Opponents of the bill claim it will be a drain of tax revenue for local governments and particularly for K-12 education, which is largely dependent on those revenues. The proposed changes would result in a shift of the tax burden away from first-time homebuyers and owners of non-homestead properties to other taxpayers, assuming the revenue would be replaced.

The Bureau of Economic and Business Research (BEBR) included a set of questions on its monthly survey of Floridians in June and July of 2011 and again in March of 2012. These questions were designed to gauge awareness and assess public opinion regarding specific portions of the proposed amendment. A total of 1,511 respondents were interviewed by phone throughout those three months (505 in June, 498 in July, and 508 in March). Results were weighted to adjust county age, ethnicity, and gender distributions to reflect the results of the 2010 Census. Eighty-seven percent of the respondents were registered to vote in Florida. The results reflect the levels of understanding and opinions of Floridians at the time of the surveys. Levels of knowledge and opinions will most likely change as the 2012 elections get closer. The inclusion of these questions at two points in time was designed to capture changes over time.

Respondents were first asked how much they knew about the proposed amendment. As can be seen in Figure 1, this has changed over time with 80% reporting they knew nothing about the amendment in March 2012 compared to 73% in June and 71% in July. This is not surprising because the June and July surveys were conducted immediately following the end of the 2011 legislative session and the March survey occurred nine months later. The level of knowledge will no doubt change as groups representing both sides of the issue lobby Floridians as we get closer to the November vote. 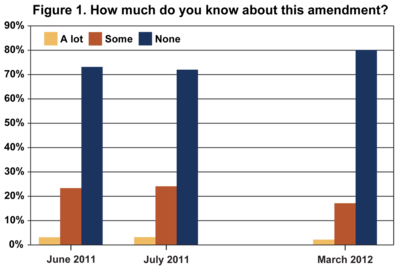 The next set of questions asked respondents about specific aspects of the bill. Table 1 shows how opinions have changed over time. Support for each category appears to be growing, particularly for first-time homebuyers. Support for tax breaks for Snowbirds has the least support. It is worth noting that many Snowbirds eventually become Florida residents who retire to their Florida homes.

Although the amendment currently lacks the 60% support it needs—with 44%in March saying they would vote for it—there appears to be growing support over time. 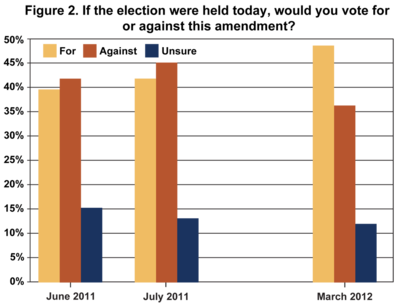 Finally, we read the following statement to respondents:

Supporters of the amendment say lower property taxes will lead to more sales of homes and reduce the inventory of unoccupied homes in the state. Opponents say it will reduce property tax receipts which are the primary source of funding for education. Keeping these things in mind, would you vote for or against this amendment?

When asked how they would vote after hearing the statement, the percentage supporting Amendment 4 increased to 44 in June, 46 in July, and 48 in March.

It is not surprising that this far from the election respondents would not understand this bill. This poll confirms that there will be a need to educate Floridians about this ballot measure.

This far from the election, it is not surprising that so many respondents do not understand the proposed amendment. Our results confirm that there will be a need to educate Floridians about this ballot measure. While Floridians seem willing to help first-time homebuyers, they are less interested in extending property tax reductions to commercial owners and those who own second homes. However, when presented with the potential to increase home sales, there was a statistically significant increase in the percentage who would vote for it, although still short of the 60% needed. Floridians should expect a barrage of advertisements surrounding this issue sometime this summer. BEBR will periodically provide updated poll numbers on this issue between now and November.