Some 79 million babies were born in the United States during the baby boom of 1946 to 1964. Floridians participated in this boom and rising birth rates—combined with rapid population growth—caused the annual number of births in Florida to nearly double between 1950 and 1960. Birth rates per woman declined dramatically during the 1960s and early 1970s, however, and the number of births in Florida declined from 116,000 in 1960 to 100,000 in 1967, even as the population continued to grow. The number of births bounced up and down during the late 1960s and early 1970s but then began rising, reaching almost 200,000 by 1990. This was caused by continued population growth, small increases in the average number of births per woman, and the aging of the baby boom generation of females into their prime childbearing years. Births declined a bit in the early 1990s but then began rising again, reaching 239,000 in 2007 before falling to 215,000 in 2010 as the economy fell into a deep recession.

It is likely that the number of births in Florida will rise gradually during the coming years, reflecting continued population growth…

Deaths have followed a totally different trend than births. Instead of bouncing up and down over time, the annual number of deaths in Florida has increased fairly steadily from less than 27,000 in 1950 to more than 172,000 in 2010. There are two major reasons for this steady increase. One is the much larger population, which has grown more than six-fold since 1950. The other is population aging. Florida’s older population has grown tremendously, both in absolute numbers and as a proportion of the total population. Since mortality rates are much higher for older people than younger people, an aging population adds substantially to the number of deaths. Deaths in Florida are projected to continue rising steadily in future years. 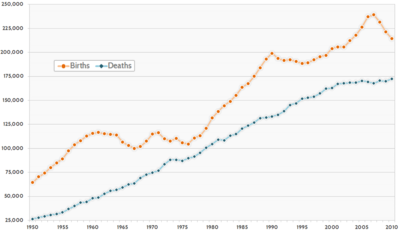 The excess of births over deaths is called “natural increase.”

The excess of births over deaths is called “natural increase.” This is the growth that comes from within a population itself, independent of in- and out-migration. The natural increase of Florida’s population rose steadily during the Baby Boom, reaching almost 70,000 by 1960. It began falling as birth rates fell, reaching 15,000 in 1976. The increase in births during the 1980s caused natural increase to rise again, to 64,000 in 1990. It fell in the early 1990s but rose to 71,000 in 2007 before falling to 42,000 in 2010. Florida’s natural increase is likely to decline slowly during the coming decades as the population ages, approaching zero sometime around 2040. After that time, deaths will outnumber births in Florida; that is already the reality in almost one-third of the state’s 67 counties. Natural increase has accounted for 10-20 percent of Florida’s population growth in recent decades, but its contribution will be disappearing over the next few decades.