Throughout history Florida’s population has continuously repositioned itself.  At the time of the first census in 1830, Florida had only 34,730 people, concentrated primarily in the Panhandle region.  By 2010 the population had grown to 18,801,310 people, concentrated in the central and southern peninsula.  This study will track the movement of the geographic center of Florida’s population from 1830 to 2010.  This movement will be illustrated by calculating and mapping the centroid of Florida’s total population.

In 1830, Leon County with 6,494 people was the Florida county with the largest population.  In 2010 there are 189 Florida cities more populous than Leon County of 1830.  Now there are forty-seven Florida counties each with more population than the entire state had in 1830, with Miami-Dade County alone having nearly seventy-two times the 1830 state population.  Miami-Dade County now has a larger population than lived in the entire state in 1940.  Today in Florida there are more than 541 people for every person living here in 1830.  There are now almost 10 people in Florida for every person in the state as late as 1940 and 25 people for every person 100 years ago in 1910.

Prior to 1930 the county boundaries changed significantly between most censuses.  The original Alachua County stretched kitelike from Georgia to Charlotte Harbor.  The 16 counties in 1830 were gradually modified into today’s 67 counties.  Names changed, as in the case of Mosquito County becoming the more appealing Orange County.  Dade County is now Miami-Dade County and is todays most populous, however, in 1860 it had all of 83 people, making it the least populated county in the state.  By 1890 Miami-Dade County had increased to 861 people but was still the least populated county, however, fifty years later it had become the most populous county in the state with a 1940 Census count of 267,739 people.

In the first half of the nineteenth century Florida, demographically speaking, was the Panhandle (defined here as Jefferson County and all counties to its west).  The Panhandle had 70 percent of the state’s population in 1830, but this proportion has declined to 7.3 percent in 2010.

Population data from 1830 to 2010 came from the decennial censuses conducted by the U.S. Census Bureau.  The longitude and latitude for the geographic center of each of Florida’s current 67 counties came from the U.S. Census Bureau.  Prior to 1930 the county boundaries changed as the number of counties increased from 16 in 1830 to the current 67 established prior to 1930.  Because of this change, the geographic center was estimated from historical maps.  The population center, therefore, is only a rough approximation for the years 1830 to 1920.  The large seasonal population in Florida is excluded from this study.  All census counts and population estimates are for only the permanent residents.

The centroid calculation is straightforward.  First, the population in each county is divided by the total state population to determine the county’s percent of the state population.  Next, this percentage is multiplied by the degrees longitude of the county’s center.  This is repeated for each county and the results are summed.  The total identifies the degrees longitude of the centroid.  Finally, the entire process is repeated using degrees latitude.

The geographical units used for this analysis are counties.  Large county areas introduce some imprecision due to the assumption that the population is equally distributed around the center point of each county.  While this condition is approximated in some counties, in others it is clearly not the case.  For example, the population of Miami-Dade County is concentrated in the northeast.  The most common skewing of county population is a shift toward coastal locations.  However, this is moderated by the offsetting effect of the dual coasts, the Gulf and the Atlantic.

The Census Bureau calculates national and state centroids using smaller geographic areas than the county used in this analysis. They also adjust for the shape of the earth by factoring in the decreasing distance between lines of longitude from the equator to the poles.  Though this approach produces a more precise centroid, at the state level, the difference between the two methods is insignificant for the purpose of this study.

The population center or centroid is the point where the state would balance if each resident had an equal weight.  For example, if on a piece of cardboard a map of Florida was drawn and identical weights were placed at the location where each person lives, the population centroid would be the point at which this weighted map would balance perfectly on the tip of a pencil. 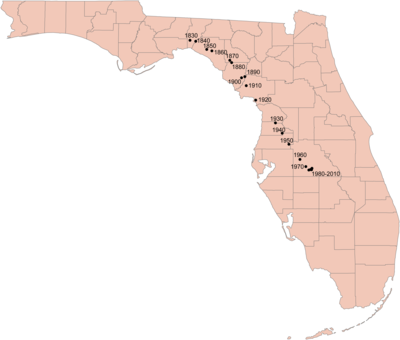 The centroid for the total population of Florida (Map 1) moved to the southeast between 1830 and 2010, from Jefferson County to southwestern Polk County.  From 1830 to 1900 the centroid moved southeasterly from Jefferson County to Dixie County as Florida’s population increased from 34,730 to 528,540.  As the state’s population grew to 6,789,443 in 1970, the centroid continued its southeasterly trend but the movement to the south was more pronounced than the easterly component.   In 1960 the centroid first moved into Polk County from southeastern Pasco County where it was located in 1950.  The movement began to slow after 1960 and by 1980 stalled.  From 1980 to 2010 the centroid has moved less than five miles to the east and approximately one mile to the north.

The movement of the centroid prior to 1900 reflects the gradual increase in settlement of areas of eastern and southern Florida that previously were sparsely settled.  The only decade where the centroid moved to the west was between 1890 and 1900.  This westward shift may be due in part to soldiers stationed at western Florida ports returning to live in familiar western areas of the state after the Spanish American War. The increased movement to the south after 1900 most likely reflects the growth of the railroads, highways and later to modern conveniences (air-conditioning) that allowed for the settlement of sub-tropical Florida.  By the second half of the twentieth century the central regions of the state started to experience higher growth rates, reflecting the growth in the tourist and service industries along with available space for development.  As a result of this recent population growth in central Florida, the centroid stalled and even moved slightly to the north.

Since the first Florida census in 1830, the state has seen mostly continuous and rapid growth.  New residents originally arrived in the north and gradually settled the lower peninsula.  As this settlement process proceeded, the center of population shifted southward.  Now that the state contains nearly nineteen million people and new residents are arriving in large numbers to most areas of the state, the population center likely will remain in the general area where it is now in the central Florida peninsula.