Figure 1 shows a map of the 37 counties that experienced natural decrease in 2014. Counties where deaths exceeded births were widely distributed across the state, covering most areas with the exception of the western Panhandle, parts of northeastern Florida and the I-4 Corridor, and most of South Florida. This is a big change from just a few years ago. Figure 2 shows that in 2007, only 14 counties experienced natural decrease, most of them located in Central Florida. These 14 counties – Charlotte, Citrus, Dixie, Glades, Gulf, Hernando, Highlands, Indian River, Marion, Martin, Pinellas, Sarasota, Sumter and Volusia – tend to have above average proportions of the population aged 65 and older. Many of these counties are retirement destinations, and most have experienced natural decrease for many years. 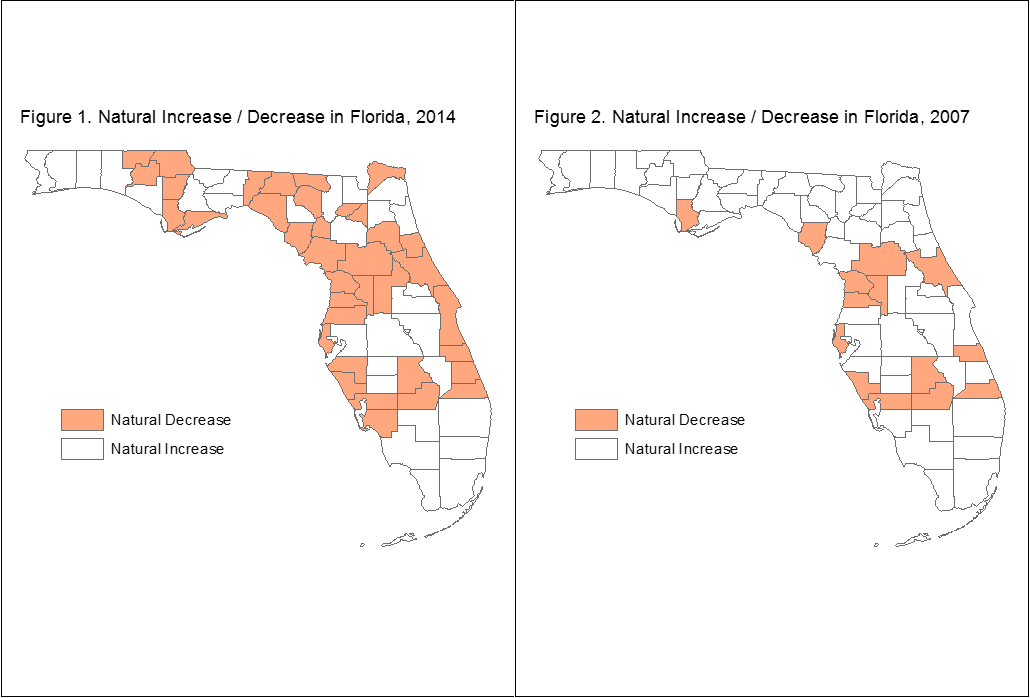 How common has natural decrease been at the county level in Florida, and how has it changed over time? Figure 3 displays the number of Florida counties experiencing natural decrease each year from 1970 to 2014. The general trend over this 45-year span has been upward, though there were periods when the number stayed relatively constant or declined. In the 1970s, 1980s and early 1990s, the number of counties with natural decrease was relatively low, fluctuating between 10 and 15 (out of the 67 Florida counties). That number then increased to between 20 and 25 in the late 1990s and early 2000s, before dropping again from 2003 to 2007. Since 2007, it has gone up steeply, exceeding 30 counties for the first time in 2013 and peaking at 37 counties in 2014. The vital statistics data for 2015 are still provisional but are very similar to 2014 with 38 counties experiencing natural decrease. 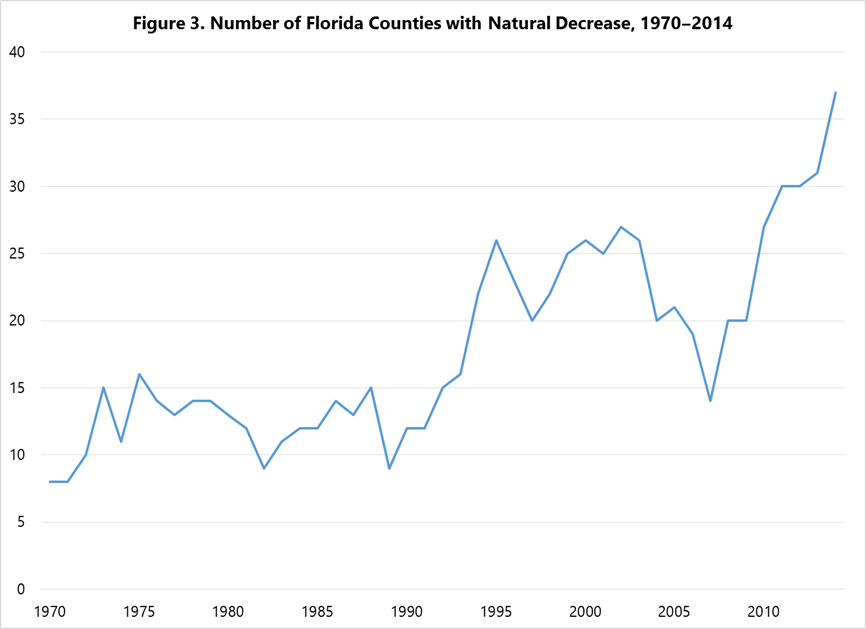 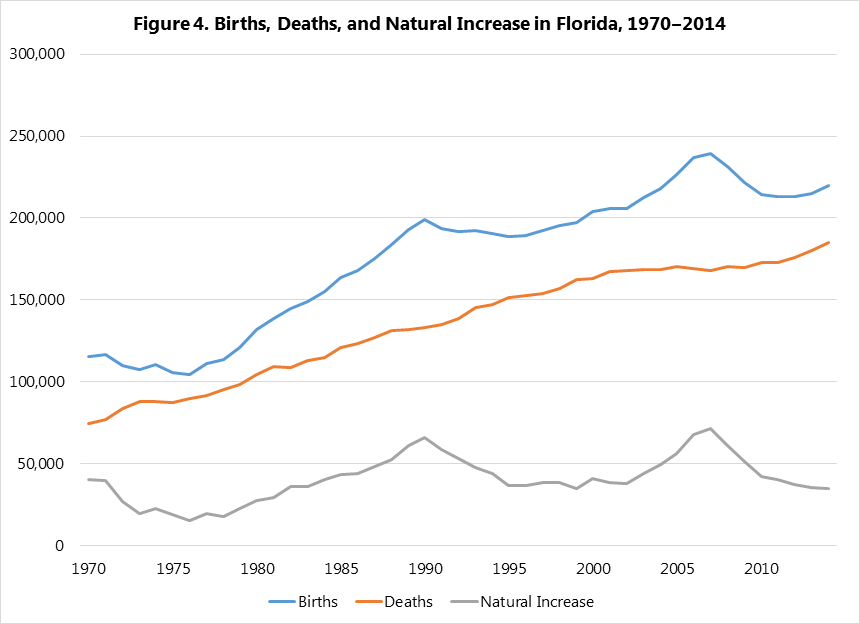 The number of births is affected by many factors. It goes up or down when fertility rates change. Even when fertility rates stay the same, the number of births can increase or decrease with changes in the number of women of childbearing age. Births often respond to economic conditions, going down during recessions and increasing in periods of economic growth. The demographic characteristics of the population also play a role. In Florida and the nation overall, birth rates for non-Hispanic whites are, on average, lower than those for non-Hispanic blacks and Hispanics. Migration, in particular the demographic characteristics of migrants, has an impact as well. For example, areas where in-migration is dominated by young workers will likely have larger increases in the number of births than retirement destinations.

In addition to the ups and downs in births, the aging of the population also affects natural increase. The number of deaths in Florida is projected to rise substantially in the coming years because of the aging of the baby boomers. According to the latest BEBR state projections for Florida, natural increase will decline steadily, with the state switching to natural decrease sometime around 2030. BEBR doesn’t project births and deaths at the county level but, given the projected statewide changes, it seems likely that there will be more counties experiencing natural decrease in the coming years than right now. Changes in fertility and mortality rates could affect these trends, of course, as would shifting migration patterns. 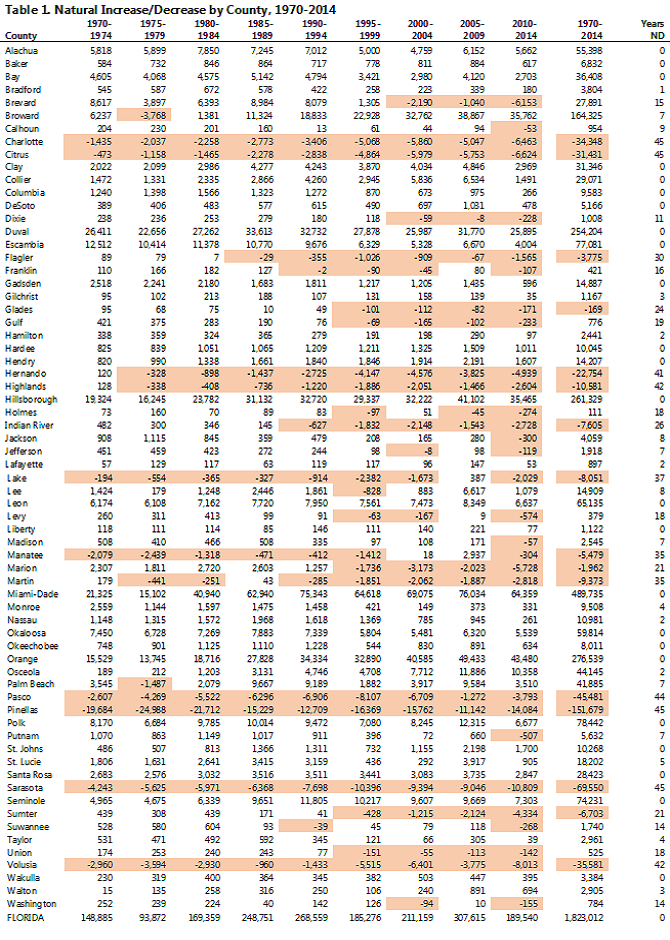 The birth and death data used in this article come from the Florida Department of Health. The county-level numbers may differ slightly from the officially published numbers because of adjustments such as allocations of births and deaths where the county of residence was unknown.