The Aging Of Florida

The population of Florida has been aging for some time, mirroring national trends.  Historical data and projections from the U.S. Census Bureau for the nation, and projections from the Bureau of Economic and Business Research (BEBR) for Florida, indicate a consistent upward trend in median age as shown in Figure 1 below.  Between the 1970 and 2010 censuses, median age for Florida increased from 32 to 41 years, an increase of 26% over the 40 year period.  Over that same period, median age for the U.S. increased from 28 to 37 years, a slightly larger percentage increase of 32%.  Median age for Florida exceeded the U.S. median age by several years throughout this period. 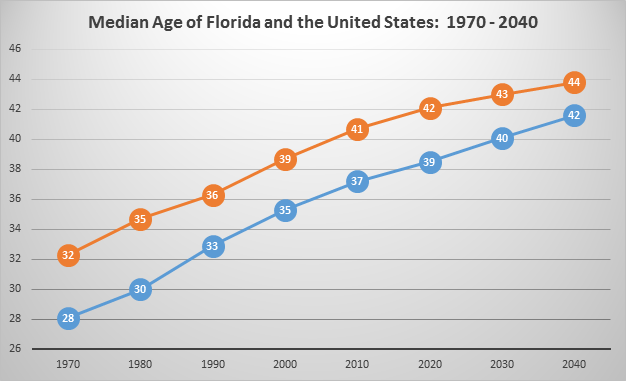 Some Florida counties are aging more rapidly than the state and some are aging less rapidly, or not at all.  In 1970, median age ranged from a low of 23.1 years in Okaloosa County to a high of 58.3 years in Pasco County, and the state’s median age was 32.3 years.  Okaloosa had a relatively high proportion of residents in the military, and Pasco had a high percentage of retirees.

By 2040, median age for Florida counties is projected to range from a low of 34.1 years in Leon County to a high of 65.1 years in Sumter County, rising to 43.8 years statewide.

Based on BEBR’s projections for 2040, median age is expected to increase further for all but one county.  The highest increase is 8.4 years in Gilchrist County, and the lowest is a reduction of 0.6 years in Flagler County.

Table 1 below contains median age values used to derive the above figures.

Table 1.  Median Age Estimates and Projections for the U.S., Florida, and Florida Counties [1, 2, 3]

The U.S. and Florida are aging.  Florida is already one of the oldest states in the U.S., and the state is projected to continue aging over the next 25 years.  This is an important consideration for governmental decision making, health care, emergency services, real estate, and other decision makers and service providers.

1BEBR Population Projections by Age, Sex, Race, and Hispanic Origin for Florida and Its Counties, 2015-2040, With Estimates for 2014.