Florida’s population has grown rapidly in recent decades, but growth rates have fluctuated considerably from one year to the next. For example, the state’s population grew by more than 400,000 between 2004 and 2005 but by less than 100,000 between 2008 and 2009. What caused this high degree of volatility? To answer this question, we must look at the components of growth. 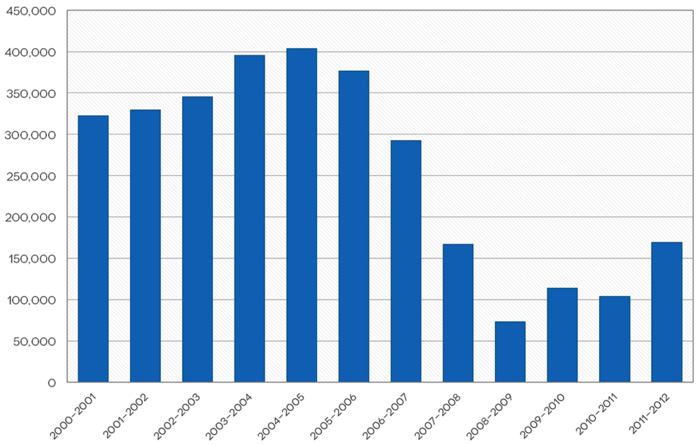 …the country entered its worst economic recession since the Great Depression of the 1930s.This pattern can be clearly seen in Figure 1, showing Florida’s annual population increases between 2000 and 2012. The first decade of the 21st century began with a mild recession but Florida’s population still grew by more than 300,000 per year, roughly its average during the previous three decades. This was followed by an economic expansion fueled by a booming housing market and Florida’s population growth surged to around 400,000 per year in the middle of the decade. The boom came to an end, however, and the country entered its worst economic recession since the Great Depression of the 1930s. Employment growth came to a screeching halt, slowing the movement of job-related migrants to the state and causing some Floridians who lost their jobs to leave the state. Retirees who otherwise might have moved to Florida could not do so because it became difficult or impossible to sell their homes. As a result, Florida’s population growth dropped to its lowest levels since the 1940s. In fact, if there had been no natural increase and foreign immigration, the state would have been losing population.