The retirements of the Baby Boomers will make retirees even more central to the state’s economy.

Florida’s economic base has long depended heavily on tourism and retirees.[1] In 2012 manufacturing accounted for only 3.4% of Florida’s employment. Agriculture and natural resource related activities, which provided nearly 5% of employment as recently as 1970, accounted for only 1.7% in 2012.[2] The retirements of the Baby Boomers will make retirees even more central to the state’s economy.

Retirees impact Florida’s economy in direct and indirect ways. They need more doctors, physician assistants, and RNs, but also more chefs, maids, hair stylists, and LPNs. Retirees and the firms and workers who serve them drive up local real estate prices and wages, crowding out firms in other, potentially higher value added, base industries. Retirees and empty-nesters who move to Florida after spending their careers and raising their children elsewhere are likely less tied to their Florida community than longtime Florida residents, and therefore may be less willing to support paying taxes to fund investments in education and infrastructure needed to attract high value added firms and high skill jobs.[3] They may also prefer a tax system that shifts the tax burden onto businesses and employees since they are no longer in the labor market.

These arguments suggest higher dependence on retirees results in a lower skill job structure. We can get an idea of how important this might be by looking at the correlation across US cities between job skill and the share of the population of retirement age, along with other variables chosen to capture the levels of tourism, education, or other important factors. While higher job skill will be associated with higher average wages all else equal, average wages are also related to other factors. For example workers are willing to accept lower pay in more attractive areas, workers demand higher pay when the cost of living is higher, and idiosyncratic local economic shocks mean local wages fluctuate over time for reasons not directly related to skill.

We can get around this by creating an index of skill across US Metropolitan Statistical Areas (MSAs) using the national average wage of each type of occupation, adjusted for differences in the geographic distribution of employment across occupations, to proxy the skill of each occupation. As integrated and largely self-contained local housing and labor markets, MSAs capture the economic notion of a city, if not the legal or political definition. This index tells us how much more or less the average worker in a city would make than the national average worker (in percentage terms) if the city’s workers were paid this adjusted national average wage for their particular jobs. A city’s index thus depends only on its job mix, not on differences in the local cost of housing or amenities, for example.[4]

Based on this measure, in 2004 job skill in Florida’s average city was 4 percentage points below the national average city.

We used 2004 data (for nearly 800 occupations) to avoid the analysis being affected by the most heated period of the housing boom, the housing bust, and the Great Recession. The figure below shows how much of that difference is statistically accounted for by three variables, Retiree, College, and Tourism. Retiree is the share of residents age 65 and older. College is the share of residents with a bachelor’s degree or more education. Tourism is the share of gross domestic product from the leisure and hospitality sector. Based on this measure, in 2004 job skill in Florida’s average city was 4 percentage points below the national average city.[5] 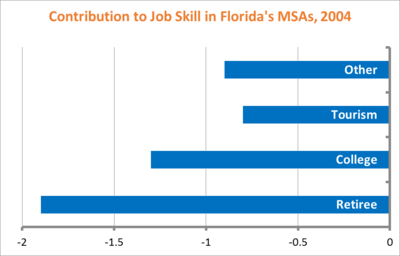 Florida’s lower share of college educated workers is associated with an additional decrease of 1.3 percentage points. The relatively large share of the leisure and hospitality sector in Florida is associated with a 0.8 percentage point reduction in average job skill. Of course, Florida has a lower share of college graduates in part due to retirees and tourism. Since various impacts of tourism on the economy are less pronounced, it is not surprising retirees are associated with a larger decline in average job skill in Florida. For example, tourism results in greater frequency of flights in and out of Florida’s cities, which is attractive to high skill workers and the firms they work for, while additional retirees, by creating local jobs instead of export jobs, appear to displace more flights than they create.

[1] An area’s economic base comprises the industries, firms, and workers in the area that compete with producers from other areas for sales. We might think of these as export firms, though their exports may flow to other areas within the same country rather than across international boundaries, and the area may be a net importer of the particular goods in the end. Other firms and workers provide local goods and services to support the base.

[2] Florida has long attracted enough in-migrants to grow faster than the nation. This means construction and other growth related economic activity has been very important. However, the population growth rate and the corresponding share of economic activity will be somewhat smaller in the future.

[3] For discussion and evidence regarding the effect of recent elderly in-migrants on school funding see Deborah Fletcher’s 2002 paper “It takes a village? Intergenerational conﬂict and cooperation in education expenditures,” Michael Berkman and Eric Plutzer’s 2004 paper “Gray peril or loyal support? The effects of the elderly on education expenditures,” and Deborah Fletcher and Larry Kenny’s 2008 paper “The Influence of the Elderly on School Spending in a Median Voter Framework.”

[4] For more details on the index, see our paper Low, Declining, Polarizing: Job Skill in Florida.

[5] The difference for the state as a whole is somewhat smaller, since non MSA skill differences are smaller.