Analysis: Fiscal Impacts of Florida Not Participating in Medicaid Expansion

Florida has a reputation for stinginess in Medicaid payments and coverage, spending less than three-fourths as much per resident as the national average.  That reputation should apply only to spending on its own residents, however.  For residents of other states, we are more generous.  Using estimates of federal spending on Medicaid across the states for fiscal year 2016, we estimate that Florida taxpayers will provide a net subsidy to other states of approximately $4.7 billion, with $1.3 billion of that going to New York.  Why does Florida subsidize a richer state?  Because New York has been more generous in its Medicaid spending all along and has become even more so as New York expands Medicaid under the provisions of the Affordable Care Act, while Florida does not.

If Florida were to expand Medicaid, some $500 million of that cost in 2016 would be covered by New York taxpayers, which is why they owe us thanks for turning down their money, while they accept ours.  California taxpayers should be even more grateful.  While they accept our support for their Medicaid expansion, Florida plans to decline more than $750 million from them.  In total, based on our calculations using the Kaiser projections, if Florida were to expand Medicaid, we would switch from subsidizing other states by $4.7 billion to being subsidized by other states to the tune of $1.7 billion. 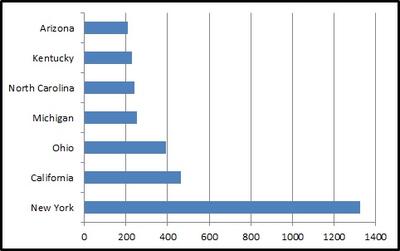 Why does the Florida legislature reject assistance from taxpayers in other states, among whom the most affluent will pay the largest share, to pay for medical care for our own low-income residents?  Perhaps they are responding to the will of the voters.  Some pollsters report that the state’s registered voters oppose Medicaid expansion, [1]although others find a large majority of voters favor expansion.[2]  It could also be that legislative districts are sufficiently gerrymandered that the legislature gives disproportionate weight to voters opposing expansion.

Though ideology plays a large role in the rejection of expansion, legislators have more justifiable reasons.  They may well believe that expanding Medicaid would harm rather than help enrollees, that the increased demand for medical care would raise the cost and difficulty of obtaining medical care for non-enrollee Floridians, that the federal government may renege on its enormous cost-sharing commitment thus placing the state budget at risk, and that there will be no gain to the state’s economy.  However, all of these beliefs are based on insufficient evidence and ignore evidence to the contrary.  In particular, though the view that Medicaid improves the health of the poor is based on weaker data than most supporters realize, it clearly improves their finances, probably improves their health, and, by treating chronic illness, likely makes many of them better workers.

The supply of medical care is relatively flexible and can be improved through granting more authority to nurse practitioners and through tort reform. Admitting that the federal government may fail to keep its commitments, if Medicaid expansion turns out to harm the poor as much as critics think, it will be easy to change course in two or three years.  Meanwhile, Florida should convene a task force of its most informed citizens before rejecting such a large source of external revenue.

The estimates in the table below are useful for illustrating an important point relevant to policy:  Florida has some choice in how much its taxpayers will subsidize Medicaid in other states. They are necessarily imprecise, however.  They assume that other expenditures, not Medicaid, will add to the federal debt (alternatively, they assume that FY 2016 state shares of taxes will remain the same as the debt is controlled).  They assume that the Urban Institute projections of federal spending by state are correct, when of course they are rough approximations.  Finally, they assume that shares of federal taxes are accurately measured and will be the same in 2016 as in 2012.

* States that are planning to expand Medicaid, according to the Kaiser Family Foundation, http://kff.org/health-reform/state-indicator/state-activity-around-expanding-medicaid-under-the-affordable-care-act/.  Those listed as “Open Debate” are classified here as not expanding.

All data in the table above are in millions of dollars for federal fiscal year 2016.

Total from Florida:  Total tax revenue from Florida residents going for the federal share of Medicaid in each state, assuming only the states marked by * expand Medicaid.

Total to Florida:  Total tax revenue from each state going to Florida for the federal share of Medicaid, assuming Florida does not expand Medicaid.

Total to Florida EX:  Total tax revenue from each state going to Florida for the federal share of Medicaid, assuming Florida does expand Medicaid.

Sources:  Calculations by BEBR.  Estimates of federal Medicaid spending by state used in the calculations are from John Holahan, Matthew Buettgens, and Stan Dorn (all of The Urban Institute), The Cost of Not Expanding Medicaid, The Kaiser Commission on Medicaid and the Uninsured, July 2013, Table 5. Estimates of states’ shares of federal taxes are from the IRS for fiscal year 2012.

To illustrate how this table is calculated, we use New York as an example, partly because New York and Florida have almost the same number of people.  In fiscal year 2012, New York, richer than Florida, accounted for some 8% of federal revenue, compared to 4.9% for Florida.  That would suggest that New York would subsidize Medicaid in Florida, rather than vice versa.  But New York had much more generous Medicaid provisions than Florida and has chosen to expand coverage.  Consequently, according to the Urban Institute estimates, federal Medicaid payments in 2016 will be almost $50 billion to New York but less than $14 billion to Florida.  The result is that New York receives about $2.4 billion from Florida taxpayers while Florida receives only $1.1 billion from New York taxpayers.  Advantage  New York, by $1.3 billion.  If Florida were to expand Medicaid, then according to Urban Institute estimates Florida would receive over $1.6 billion from New York.  The New York advantage would drop by half a billion to $0.8 billion.

The actual calculations, which risk giving a false sense of precision, for New York are: