Brazil’s Economy and its Effect on Florida

It was not long ago that Brazil was thought to be one of the next few major global economies. These fledgling economies became collectively known as BRIC, an acronym for the member states (Brazil, Russia, India, and China). However, what was once a source of optimism for Brazil has now become a source of gloom.

Over the past two years, Brazil has fallen into a recession so destructive that economists are unsure when Brazil will recover. It does not help that Brazil had to spend extravagantly on hosting international events such as the World Cup and the Olympics. Nor does it bode well for foreign investors that the political scene in Brazil has been mired in one corruption scandal after another, one of which has actually led to the impeachment of the nation’s president, Dilma.

With the increasingly globalized nature of the world’s economy, over the past few years Brazil and Florida have become linked. This link can be seen in several economic sectors in Florida, such as tourism, real estate, and the trading of goods. While Brazil enjoyed its economic prime in the early 2000s, this tie was beneficial. However, with the recent downward turn in Brazil’s economy, it has not taken long for their woes to become ours.

How does a country that once seemed to be full of potential fall from grace so drastically? 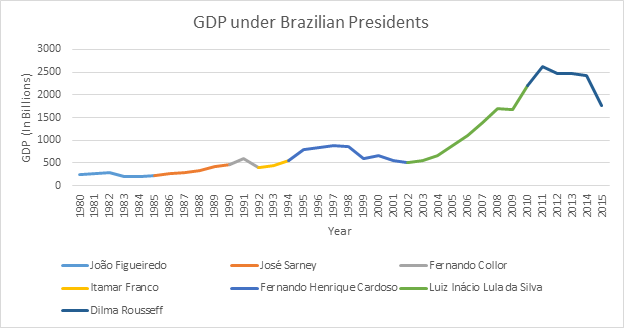 Source: World Bank
Why it matters to Florida

With globalization of the world’s economies becoming the new norm, such a devastating blow to a country’s economy will no longer be an isolated event. Brazil, over the past few years, has been one of Florida’s biggest trading partners. Brazil has also been one of Florida’s major sources of tourism, buyers of properties, and foreign investment. However, amid the political scandal and economic stagnation, Brazil’s political and economic turmoil has been felt here at home. We are already seeing this effect in our trade and tourism with Brazil, both falling between 2014 and 2015.With the Real doing so poorly, Brazil is no longer in the same position to buy our exports. In fact, according to 2015’s Florida International Business Highlights between the years 2013 and 2015, Florida’s exports to Brazil dropped 19.6%. In 2013, trade with Brazil made up $20.5 billion and tourism gave Florida a $2.3 billion boost to our economy (Cooper, 2014). However, as the figures below show, these sectors have experienced losses over the past few years.

Because tourism is one of the biggest industries in Florida, Brazil’s recession has deprived the state of one of its largest tourist suppliers. Another market on which Brazil has a large effect is Florida’s real estate. Two of the most popular metropolitan statistical areas for Brazilian buyers, Miami and Fort Lauderdale, have seen their condo sales remaining either stagnant or steadily declining. These sectors of the Floridian market that have benefited from Brazil’s economic boom now find themselves at the mercy of the Brazilian recession, which unfortunately has no end in sight.

While interdependence is a practically inevitable consequence of the modern world, it does not necessarily have to mean mutual destruction. Whether it be to Canada and the United Kingdom for tourism, or Venezuela for the housing market, Florida will have to look elsewhere for countries to step up and fill Brazil’s shoes.