Charitable Donations and the Fiscal Cliff

Charities are keeping a wary eye on the fiscal cliff negotiations, worrying that a proposal to cap deductions for contributions may become law. If it does, charities—and those they help—will suffer, according to the latest research.

Proposals under discussion involve caps of a given dollar amount, say it becomes a $35,000 cap per filer. That of course would have no effect on most taxpayers, but it could reduce giving by the top one percent in particular. These one-out-of-a-hundred households account for a large share of donations, and their share has been rising with the growing polarization of income and wealth. 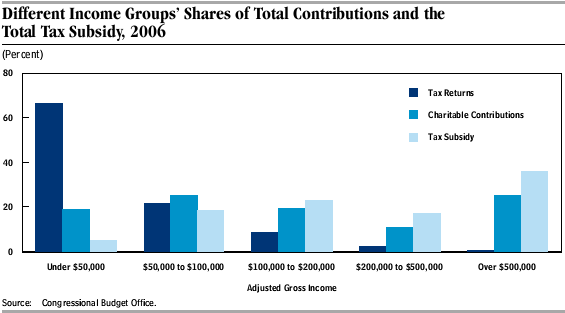 Charitable giving encourages spending that helps us all. Gifts to a local public or private school, for example, not only help but provide more flexibility than government funds.

That means that the impact of capping charitable deductions would be large. The cap would be poor policy, in my view. Charitable giving encourages spending that helps us all. Gifts to a local public or private school, for example, not only help but provide more flexibility than government funds. Most economists think that in an ideal world, people should be taxed for what they consume, not on what they produce. When you donate your money to charity, you likely have produced something to earn that money but are not consuming it yourself. Economists also favor taxing people on their ability to pay. If you give away some of your income, that reduces your ability to pay. Finally, if donations are highly sensitive to tax rules, as they appear to be, then we as a society get a big bang for the buck in allowing charitable donations to be deducted. If the price elasticity is minus one, each dollar of tax revenue lost results in a dollar given to charity—without the distortions of work incentives that taxes cause.

For those who seek evidence about the sensitivity of donations to tax laws, I discuss two studies I consider to be among the best available. The first is by economists from the Office of Management and Budget, Jon Bakija and Bradley Helm. (“How Does Charitable Giving Respond to Incentives and Income? New Estimates from Panel Data,” National Tax Journal, June 2011) As OMB analysts, they had access to individual tax returns and assembled 330,396 returns over the years 1979 to 1998. For each of those years, they looked at how tax rates and laws varied both at the federal level and in each of the states. They found that the price elasticity of donating is minus 1.3. In the example above, removing the exemption for a taxpayer in a 28% bracket would reduce giving of $100,000 by roughly a third, to about $67,000. They also show that taxpayers anticipate changes in the rules.   For example, donors increased their gifts in 1986, knowing that tax rates would fall in 1987. If it were to be announced that donations would be capped in 2013, people might give more in 2012. 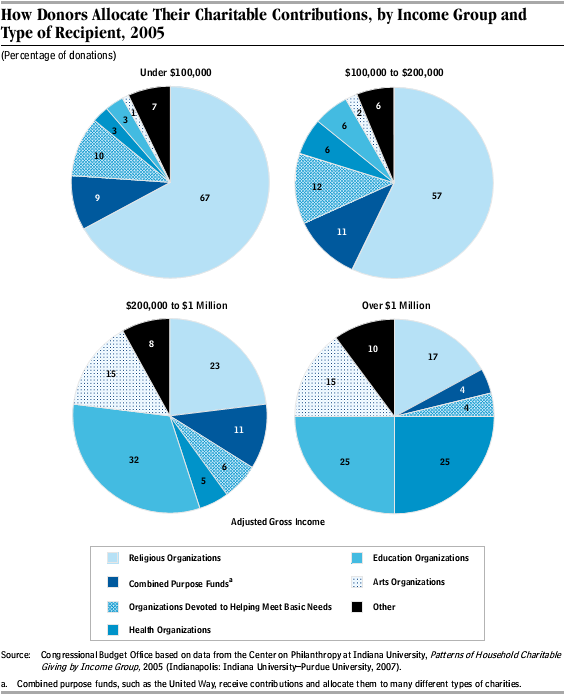 The second study is by Gerald Anton of the Office of Tax Analysis, Holger Sieg of Carnegie Mellon, and Charles Clotfelter of Duke. (“Charitable Giving, Income, and Taxes: An Analysis of Panel Data,” American Economic Review, March 2002.) Using data from tax returns from 20,000 individuals over the years 1979 through 1993, they obtain estimates of the price elasticity of charitable donations ranging from minus 0.8 to minus 1.3. Minus one is a good approximation. That suggests that in the example above, removing the exemption would reduce giving from $100,000 to $72,000. By either study, the effect is substantial. Moreover, how much a charity’s donations would fall would depend on what share of its gifts come from the wealthy. Art museums would be likely to be more strongly affected than churches, for example.