College Tuition: Florida's Public Universities Compared to the Rest of the Nation

Higher education has been a popular political topic in the early months of the 2016 U.S. presidential race. Florida Senator Marco Rubio, in a July campaign speech in Chicago, argued that “our higher education system is controlled by what amounts to a cartel of existing colleges and universities, which use their power over the accreditation process to block innovative, low-cost competitors from entering the market.”

Rubio promised that if elected president, he would “bust this cartel by establishing a new accreditation process that welcomes low-cost, innovative providers. This would expose higher education to the market forces of choice and competition.”

A former presidential candidate, Governor Scott Walker of Wisconsin, has gone beyond words in dealing with higher education. This summer he signed legislation cutting the University of Wisconsin’s budget by $250 million, in addition to removing tenure for professors from state law.

President Obama hoped to put downward pressure on tuition by developing a rating system that would measure college and university quality with a single index, to be published before the 2015-16 academic year. His plan aimed to allow college applicants to compare quality and tuition easily, enabling them to choose a given quality at the lowest price. His proposal collapsed, however, because of the impracticality of measuring educational excellence with a single number.

Hillary Clinton also seeks to reduce the tuition burden on students. In her plan, students pay their wages from 10 hours a week of work and their parents pay a share of tuition set by a formula applied to their incomes. Her plan would not, however, prevent students from having to take out loans to pay other college expenses, such as room and board, which are often more costly than tuition.

In Florida’s public universities, average 2015-16 tuition is nearly $3,000 below the national average, $6,351 versus $9,163. Only four states have lower tuition—Alaska, New Mexico, Utah, and Wyoming—and of those only Wyoming has tuition which is noticeably lower than Florida’s at $4,646. In fact, five states have tuition more than double Florida’s. 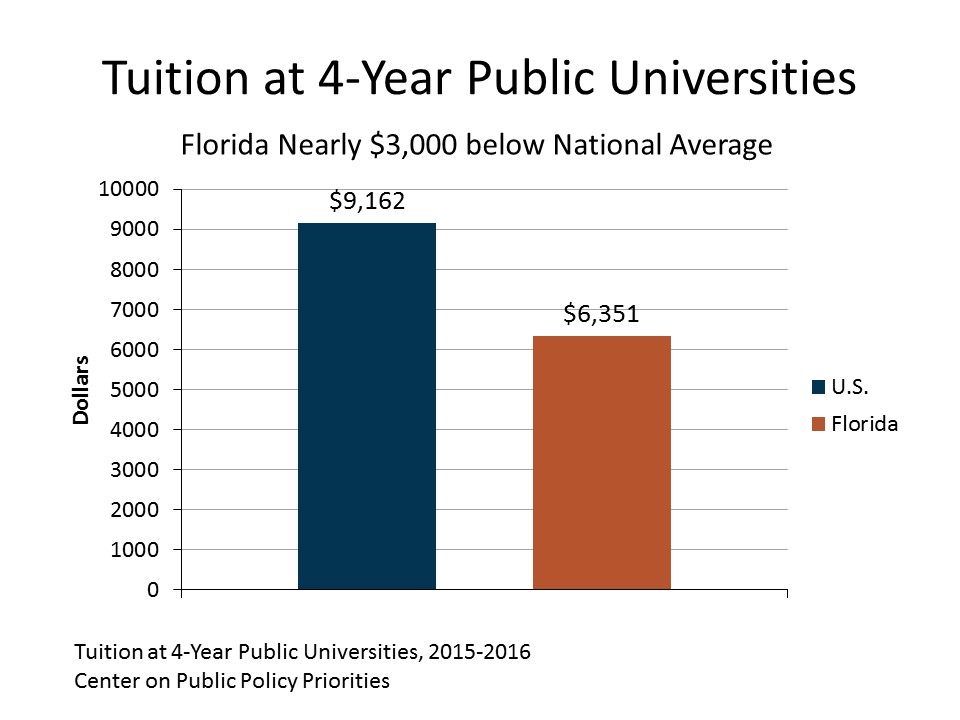 How did tuition in Florida come to be so low? Many students and parents will see this as the wrong question, since tuition is now 50 percent higher than it was just two years ago. We think, however, that for many years tuition in Florida was remarkably low because of constraints on the state budget imposed by two programs, Florida Prepaid and Bright Futures. As those constraints were eased, tuition has approached a more typical level. That will not continue, however.

By “typical level” we mean what tuition might be given Florida’s income per resident, spending for higher education in the state budget, and the share of students going to public instead of private institutions. Our reasons for looking at those three measures are basic. Wealthier people pay more for quality, whether cars or education. If the state directly funds higher education generously, universities rely less on tuition to boost quality. Finally, the larger the share of students going to public institutions, the less state money is available for each one. That forces universities to depend more heavily on tuition.

We have conducted a statistical analysis across states that yields results compatible with the notion that each measure has the expected effect: more state spending is associated with lower tuition, while higher personal income and a larger share of students going to public universities are associated with higher tuition.

These variables do not explain, however, why tuition is so low in Florida. That’s because by these three measures, Florida is close to the national average. Accompanying graphs illustrate that Florida’s per capita state spending on higher education is only 9% lower than the nation’s, while our income per capita is just 8% lower than the U.S. average. In Florida, the share of students going to a public college is 71%, versus 74% nationally. 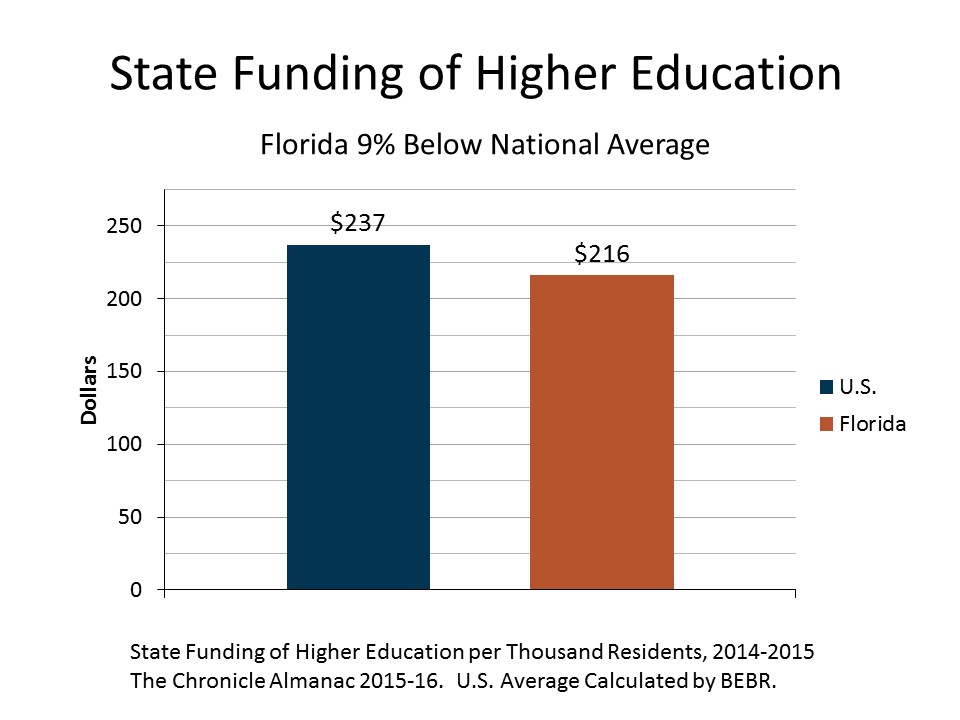 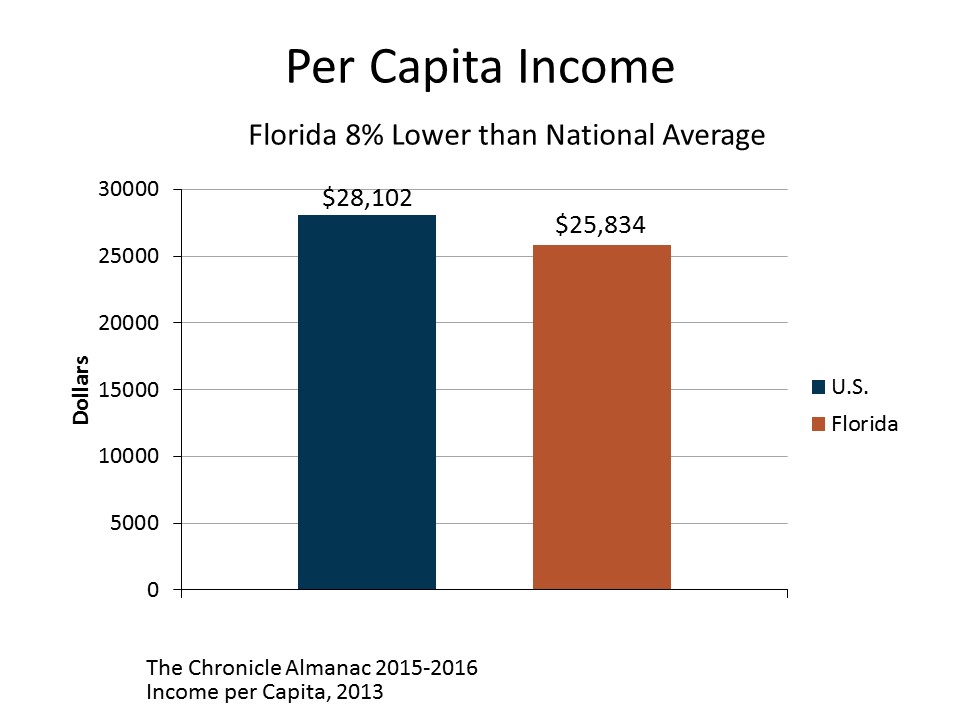 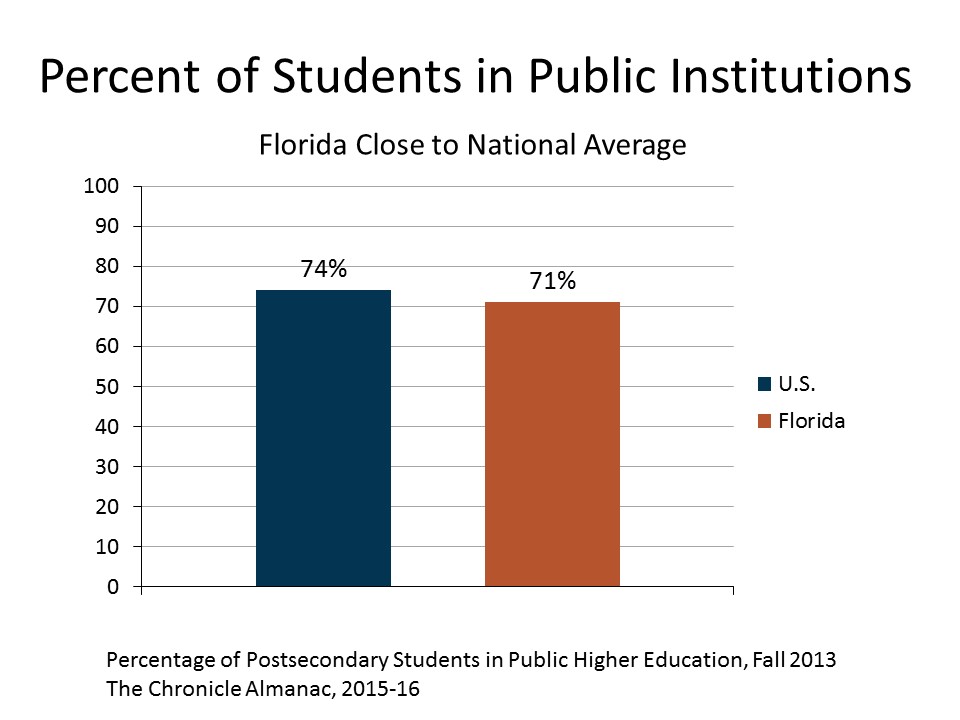 Based on these numbers, the analysis suggests that you would expect tuition in Florida to be $8,684, not far below the United States average and much above the actual figure.This prediction is intuitive: if Florida is about average in income, state funding, and how students split between public and private higher education, then you’d expect the state to have about average tuition. Instead, Florida tuition is very low compared with other states.

There are reasons for this low level, one of which is the Florida Prepaid Program. Initiated in 1988, Florida Prepaid allowed parents, grandparents, or others to purchase a plan that guaranteed the payment, when the time came, of full tuition for a child at any Florida university. The plans carried implicit guarantees from the state budget. That meant that if universities raised tuition too much, the Legislature might have to chip in, straining the state’s budget.

The second reason is the Florida Bright Futures Scholarship program, which used to guarantee payment of a share of tuition, the share depending on the recipients’ high school grades and SAT or ACT scores. The higher the universities set tuition, the more expensive the program.

The Bright Futures program has now been delinked from tuition, paying fixed dollars amounts instead, removing that constraint. For Florida Prepaid, however, the constraint has become formally binding. To reduce the cost of buying Prepaid plans, the Legislature, at the urging of Governor Rick Scott, has restricted tuition into the indefinite future. The University of Florida and Florida State University can increase their tuition differentials by at most 6% a year. Other research universities in the state cannot raise their tuition differentials at all.

Unless that is changed, tuition in Florida will remain unusually low.