Do Unemployment and High School Dropout Affect Crime in Florida?

Crime is a societal ill found mainly in the periphery of American society. In a 2016 list of the “Nation’s 100 Most Dangerous Cities," 12 cities were located in Florida.[1]

In America, if education is interrupted, the opportunity for an individual to obtain a living-wage job is significantly diminished. If an individual drops out of high school altogether, the lack of fruitful employment can sometimes lead him to believe criminal acts are the only way to survive or live comfortably. However, high school dropout rate is only one of the factors deemed by some to have correlation with crime rate.

As one of the states hit hardest in the Great Recession of 2008 and 2009, Florida experienced an exceptionally high rate of foreclosures, a spike in its unemployment rate, and increased poverty compared to that of other states as well as that of the nation.[2] However, as seen in Figure 1, the crime index rate was unexpectedly unaffected by these exacerbated conditions that are usually seen as factors potentially associated with crime incidence. In fact, there is almost a steady decline in the crime index for Florida, with only a slight increase experienced between 2006 and 2008. 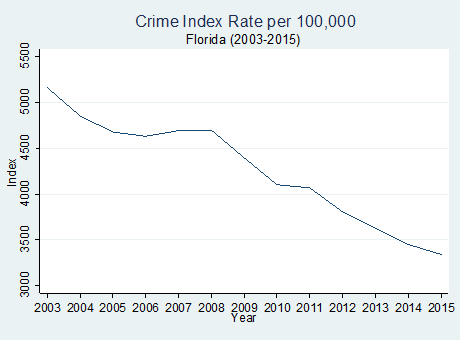 The data used for this report was collected from these US agencies: the Florida Department of Law Enforcement (FDLE), the Florida Department of Education as well as the US Bureau of Labor Statistics to obtain information on the “Total Crime Index Rate per 100,000 habitants,” “High School Dropout Rate,” and the “Unemployment Rate.” According to the FDLE, the “Total Crime Index Rate” per 100,000 habitants is based on the number of crimes reported rather than on the number of arrests made.[3] The types of crime included in this index are those of murder, forcible sex offenses, robbery, aggravated assault, burglary, larceny and motor vehicle theft. The “Unemployment Rate” is the ratio of unemployed to the civilian labor force expressed as a percentage.[4] In Florida, a “dropout” is defined as a student who withdraws from school without transferring to another school, home education program, or adult education program.[5] These data track public high school students in Florida in grades 9-12 at the time of dropout by year and county, using the end of the school year as the reference period. The report accounts for “High School Dropouts” of public “special schools” in Florida as well. The research analyzed the relationship between the crime index for each of Florida’s 67 counties and factors of unemployment rate and high school dropout rate within the parameters of the 11-year span of 2003 through 2014.

In the raw data retrieved from the Florida Department of Education, the high school dropout rate averaged 2.7% between 2003 and 2014. Six counties in Florida: Gilchrist, Madison, Nassau, Gulf, Okaloosa, and Liberty counties had a high school dropout rate of 0.2% between the years 2005 and 2014, the lowest rate seen in Florida since 2003.[6] Gilchrist maintained a high school dropout rate at 0.2% for three consecutive years, from 2009 through 2011. Seen in Table 1, Florida’s unemployment rate averaged around 6.81% for the years between 2003 and 2014. Walton County had the lowest unemployment rate in 2006, with a rate of 2.2%. Flagler County possessed the highest rate of unemployment at 14.7% during 2009, a peak year of the Great Recession.

The correlation coefficient is a number used in statistical analysis to determine the interdependence of two variables, their correlation. Scatter plots with a fitted line shows the best fit for analyzing the correlation between the variables. Figures 2 and 3 show the relationship between certain factors for all years. 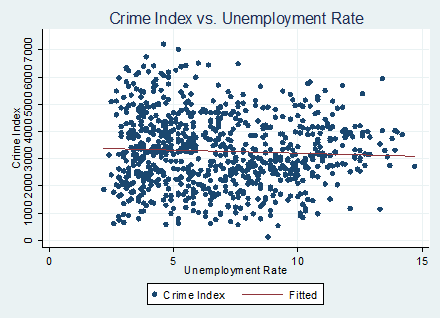 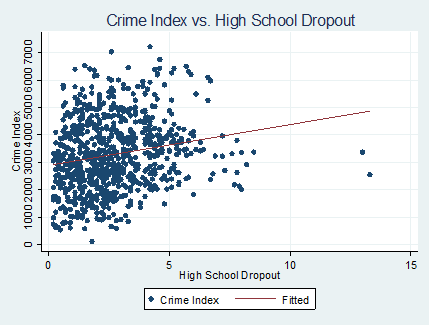 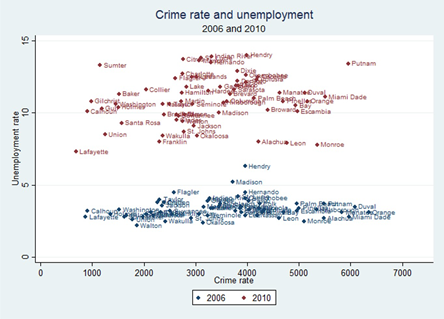 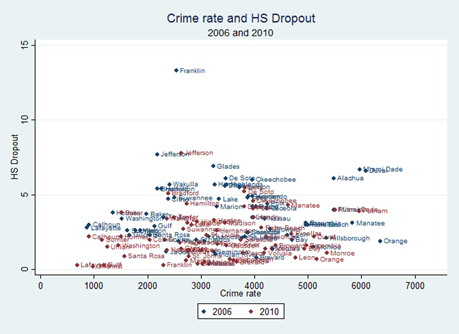 Table 2: Correlation Coefficients between all variables

Seen in Table 2, the negative correlation between the unemployment rate and the crime index at a value of -0.07 is so low in strength and close to a perfect zero of non-correlation that it is better to assume any observed relationship between these two factors is almost inexistent. It is possible that a correlation between weekly claims for unemployment insurance might be stronger with the crime index, but in the case of the pure unemployment rate, a correlation is not evident. These correlation coefficients indicate that a higher unemployment rate does not necessarily impact the crime index in any particular way for the counties of Florida. This is further seen in the Figure 4, denoting the years of 2006 and 2010. The dramatic vertical shift of each point in 2010 (denoted in red) demonstrates the lack of difference in the crime index as the points did not shift left or right for the most part from their location on the crime index in 2006. Quality of education and educational attainment of parents of high school students has been proven to impact the decisions and life choices of individuals as they are socialized to choose their future path and occupation. Furthermore, Figure 5 shows the utter lack of change in position in the scatterplot between the crime index and the unemployment rate from years 2006 and 2010, further emphasizing the lack of a correlation between these factors as the post-recession conditions seem to have little to no impact on most counties’ positions. Further investigation is necessary into other outlying factors that could significantly impact the crime index rate such as the geographical location of these counties, the quality of the education of the public school system, and the educational attainment of parents of the individuals surveyed in order to properly analyze the full scope of variables that might be impacting the direction and strength of the correlation coefficients.

Figure 6 shows the change in the growth rate of the variables of crime rate and unemployment in all counties of Florida. The year 2010 was chosen because it is when the peak unemployment rate was reached in Florida and 2014 was chosen as a point in time where the economy is said to be well on its way to recovering from the shock of the Great Recession. As seen in the four-quadrant graph, the unemployment growth rate is negative for all counties in this period, indicating a decrease in the unemployment rate. The crime index growth rate is negative for most counties, with only a few, such as Gulf, Gilchrist, Washington, Hamilton, and Lafayette Counties seemingly having experienced an increase in the crime growth rate. These outlier counties indicate a need to further investigate Florida’s crime index, unemployment rate, and high school dropout rate with special attention to the differences in each county’s composition and special circumstances of geography and demographics. 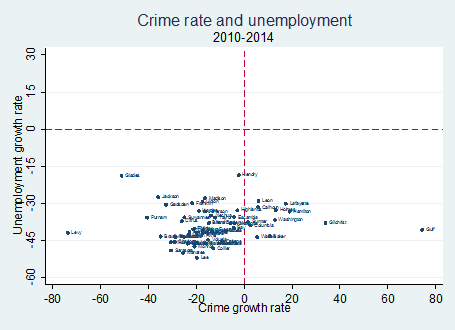 The high school dropout rate minimums maintained themselves at 0.2%, and the maximums actually fell in the years of the recession by almost half (13.3% to 6.8%). This could support the notion that students realized the job market was toughest to find a job without a high school diploma. It seems that the lack of employment opportunities does not directly translate into an increase in criminal activity. It is possible that a different correlation and perhaps even a noticeable direct correlation might exist if weekly claims for unemployment insurance were to be analyzed, but as far as the extent of this research, there is a lack of a direct correlation between the pure unemployment rate and the crime index rate in the State of Florida. This research concludes that on a statewide-basis, there is no significant association between the crime index and the unemployment rate and high school dropout rate and that it is necessary to analyze other potential factors associated to the incidence of crime in Florida.