Teacher salaries in Florida, including benefits, average around $56,700 a year. That compares with a national average of approximately $66,000. Florida has one school district that beats the national average, Sarasota at $68,500, and another that matches, Monroe at $66,000. The other 65 are all lower, with the lowest being Union at $46,700. 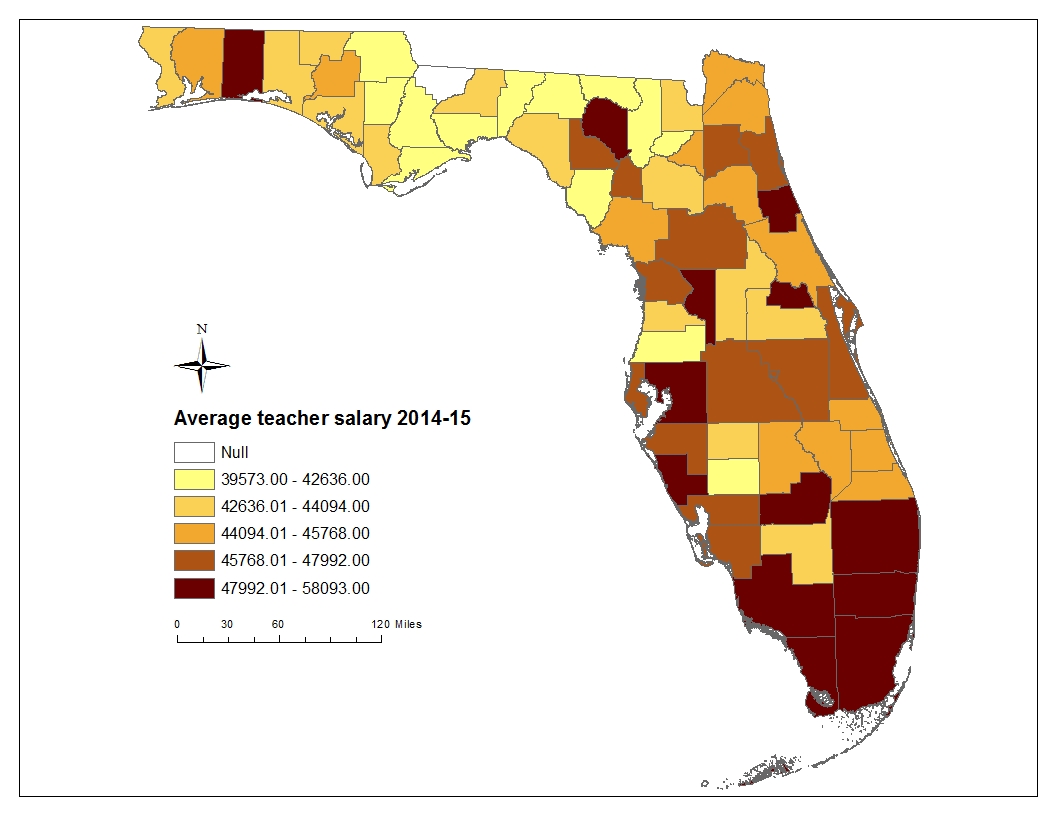 The FEFP is adjusted for differences in wages across counties. The wages are adjusted for skill by controlling for occupation. If accountants and welders earn more than average in a county, the district is expected to have to pay its teachers more. For this purpose, the state uses the Florida Price Level Index, the name given the measure of wage differences across districts.

In theory, salaries should vary percent by percent with the Florida Price Level Index (FPLI). If the FPLI for one county exceeds that for another by, say, 10 percent, then its teacher salaries should be 10 percent higher as well. In fact, however, statistically they would be predicted to be 20 percent higher. Salaries vary more than expected across districts. Moreover even allowing for the 2-to-1 relationship, the FPLI leaves 58 percent of the variance across counties unexplained.

To explore the sources of this excess variance, we match data from school budgets for the 2014-15 academic year to other information from the Florida Department of Education. Since all districts have similar budget constraints per student, we expected to find their salaries to be lower if they have either more teachers per thousand students or if they spend more on other items, such as energy. Both of those expectations turned out to be true.

Using data from the budgets of the 67 school districts for the 2014-15 academic year combined with other information from the Florida Department of Education, we find that schools that have more teachers per thousand students do, in fact, pay less. The effect is weaker than expected. Suppose that a district has a fixed budget for teachers, say $5 million. Then it could pay 100 teachers $50,000 each, or it could hire 101 teachers and reduce pay to $49,505. A 1 percent increase in the number of teachers would force a 1 percent reduction in pay. It turns out statistically, however, that a 1 percent increase in the number of teachers is associated with pay only half a percent lower. Districts that hire more teachers find extra money elsewhere in their budgets.

Figure 3. Teacher Salaries by Number of Teachers per 1,000 Students*

One reason some districts hire more teachers per thousand students than others is that a larger share of their students attend elementary school. The Florida Class Size Reduction Amendment, passed in 2002, requires that core elementary classes have at most 18 students, compared with 22 for middle school and 25 for high school.

Extra spending on energy correlates with lower teacher pay almost dollar for dollar. Of course, it could be that districts offer teachers a collective choice. “We’ll give you a larger paycheck, but in class you’ll have to swelter or freeze.” We think that unlikely, however. More plausibly, high energy spending results not from hot or cold classrooms but from old buildings, high electric rates, and less access to natural gas. Spending more on transportation per student is also associated with lower teacher pay.

Together, the factors—the Florida Price Level Index, the number of teachers per thousand students, the costs of energy and transportation, and spending on student personnel services and instruction and curriculum development services—explain almost two-thirds of the variance in average teacher salaries across districts. Statistically, that leaves a third of the variance still to be explained. More importantly, that also leaves unresolved the reasons districts make the choices they do, choices such as how much to spend on student personnel and curriculum development services.