Florida’s high school graduation rate has been steadily increasing since 2003. However, from Figure 1 we see that expenditures per unweighted full-time equivalent (UFTE) student, have greatly fluctuated through the years, and have actually decreased since 2007. The expenditures were adjusted to 2015 dollars to provide a more comparable analysis. Despite the decrease in expenditure per unweighted full-time equivalent student, more Florida high school students are graduating each year. This can be attributed to the fact that many high school students now have more opportunities to complete their degree, such as online courses. Online courses not only give students more options to choose from when selecting courses, but also credit recovery. Students who have fallen behind are given a chance to catch up and graduate on time. For example, in 2010 the graduate rate in Gadsden County was 43%, however in 2016, with online credit recovery, the graduation rate rose to 68% [1].

On the other hand, when we look at mean SAT scores and the graduation rate in Figure 2 we do not see the same upward trend. The SAT college admission test has become increasingly popular among college-bound students since most universities using it as a component in the admission process. In 2015, there were 1,698,521 high school graduates who took the test nationwide including 122,939 Florida students [2]. In this article we will take a closer look to understand why mean SAT scores continue to decrease even though more students are graduating.

Source: College Board and Florida Department of Education

To understand why the mean SATs scores in Florida are declining, we looked at the demographics of the students taking the SATs over the years 2006, 2011, and 2015. Table 1 shows that in 2006, whites were the majority of students taking the SATs at 52.6%, followed by Hispanic at 15.3%. In Figure 2, we see that in 2011 there was sharp decline in mean SATs scores. Looking at the demographics of that year, the proportion of white test takers declined by about 6 percentage points and there was an increase in Hispanic and African American test takers. Fast forward to 2015: The percent of white college-bound students taking the SATs declined even more to 42.9%, and again we see an increase in the other races, with the exception of a small decrease in African American and test takers of other races. 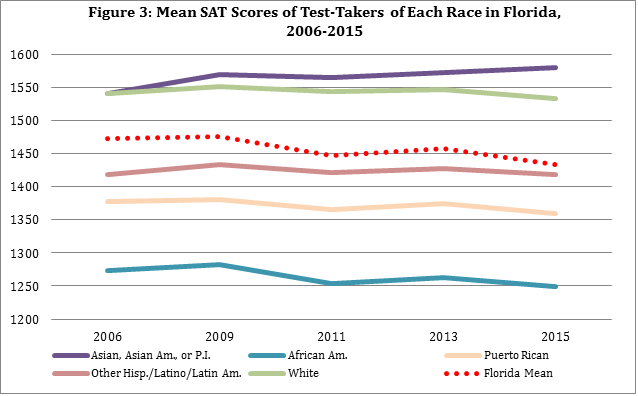 Figure 3 help give us a better understanding on why the Florida SAT mean score is actually declining. From 2006 to 2015, Asians have consistently scored the highest, and African Americans have consistently scored the lowest. During this period the mean SAT scores for Asians increased, while the mean scores for the other races sometimes decreased. Taking a look at all the mean scores over the years we see that there is not much movement, for example African Americans never had a mean score above 1300, and stayed in the 1240-1290 range. The order also has remained the same, Asians always score highest, followed by whites, other Hispanics, Latino, Latin Americans, Puerto Ricans and lastly African Americans. Table 1 shows that over the years the percentages of Asians and white test takers have decreased from 57% in 2006 to 47% in 2015. This explains the decreasing Florida mean. Asians and whites are consistently the high scorers over the years and with a lower proportion of them taking the exam, the Florida mean has decreased. 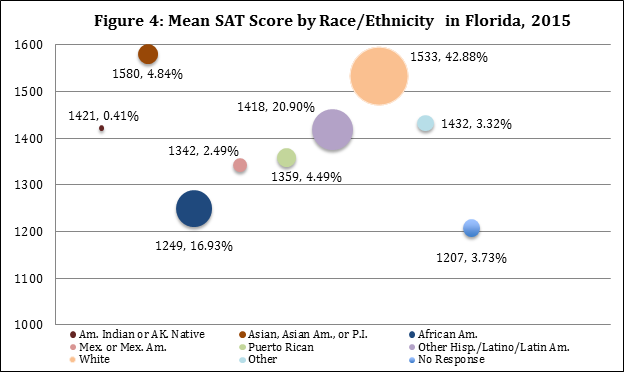 Source: College Board
Note: The value on the left near each circle is the mean SAT, the second one is the percentage of test takers within each race/ethnicity.

Figure 4 above shows that Asians have the highest total mean of 1580, but only make up 4.84% of test takers in 2015. African Americans had the lowest total mean score of 1249, but they make up 16.93% of all test-takers. In 2015, Florida’s mean total SAT score was 1434, the only two groups above the mean are Asian/Pacific Islanders and whites, these two groups only make up 47.72% of all test takers. The rest of the population make up 52.28% and are below the Florida total mean. The 47.7% of Asian and white test takers are keeping the mean SAT score up, while the rest of the 52.3% of test takers are dragging the mean scores low.

Now let’s take a look at the economic status of SAT test takers in Florida in 2015 to see whether or not a higher family income results in students having a higher SAT score. The greatest percentage of test takers (12.6%) are found in the $20,000-$40,000 income interval with a mean score of 1387. According to the available data, as income increases, the mean SAT score increases. For example, the fewest test takers (1.8%) are found in the $140,000-$160,000 income interval with a mean score of 1577. The highest total mean SAT score comes from the college-bound students whose family income is greater than $200,000 with a mean of 1645. College-bound students who have family incomes from $40,000 to greater than $200,000 have a greater total mean SAT score than the Florida mean; however they only make up about 37.73% of all test takers. Unfortunately, a large number of individuals did not report their income (39.4%) so it is not possible to say whether or not greater income leads to a higher SAT scores, or if there is even statistical significance in the SAT scores between these groups. It is also important to note that this was self-reported and may be inaccurate.

With the increase of high school graduation rates over the years we’d expect to also see an increase in SAT scores, however this is not the case. With more minority students having the opportunity to take the SATs over the past 10 years, the total SAT mean score has decreased. When looking at the expenditure spent on each student in Florida we see that this number has slightly decreased from past years. Schools need to provide students with the assistance needed to do well on such standardized tests, something that may be slipping during times of tight budgets.

Why is SAT performance important? Nowadays it may not be enough just to have a high school diploma, employers want employees with a degree. By aiding those students who need extra help to perform better on the SAT, their chances of getting into an university will increase as well.

While these data show a relation between minority/low-income students and SAT performance, there are many other factors that affect SAT scores that we did not take into account, such as the national decline in test scores, greater numbers of students taking the test, possible cultural bias in the test itself, etc.