Florida, like the rest of the South, spent the century after the Civil War playing catch up economically. As shown in Figure 1, Florida caught up in the 1980s, at least as measured by per capita income. Since housing costs in Florida were relatively low and since, with its sunshine and beaches, many think of Florida as a pleasant place to live, the standard of living in Florida was perhaps briefly higher than the US average. But, per capita income in Florida fell steadily relative to the US over the 1990s. While that fall was interrupted by the income generated by the housing bubble in the 2000s, by 2011 relative per capita income in Florida was lower than it had been since the 1970s. However, Florida and the nation are struggling to recover from the Great Recession. Were the fundamentals of Florida’s economy trending down over the last decade, with the decline masked by the housing bubble, or is the low point represented by the last few years transitory? 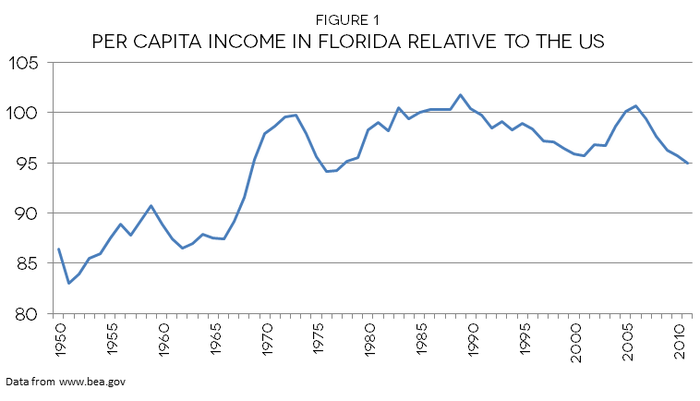 As shown in Figure 2, the Great Recession was severe. The national unemployment rate has been above 8% longer than at any time since the Great Depression. During the housing boom, Florida’s unemployment rate fell below the nation’s, and accordingly rose above it following the bust. Even though the unemployment rate is down somewhat from the heights of 2009 and 2010, the employment to population ratio (for those 16 and over, right scale) remains flat. Thus, as we all know, the economies of Florida and the nation are far from fully recovered. According to both August 2012 projections from the Congressional Budget Office (http://cbo.gov/publication/43539) and June 2012 projections from the Federal Reserve (http://www.federalreserve.gov/monetarypolicy/mpr_20120717_part4.htm), unemployment will remain above 7% through at least 2014. Thus, we should avoid reading too much about long run trends into the last few years of income data in Figure 1 alone. 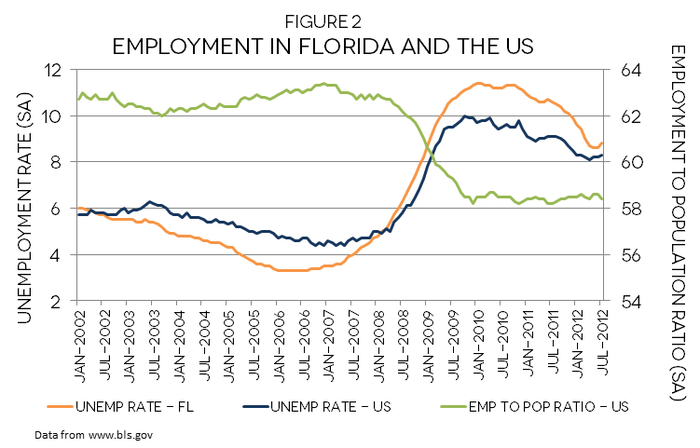 in 2010 Florida’s employment growth relative to population slightly outpaced California, Nevada, and the US, with Arizona lagging far behind. In 2011 Florida outpaced them all by a wider margin, adding jobs a full percentage point faster than population.

We can gain additional insight comparing employment growth to population growth and comparing Florida not just to the US but also to other states where the housing boom and bust had large impacts. Figure 3 shows the difference in annual percentage point changes in employment and population for Florida, the US, Arizona, California, and Nevada, with 2002 serving as the base year to minimize the impact of the 2001 recession on comparisons. Employment grew fastest relative to population in Florida over the boom, and fell fastest during the bust. However, in 2010 Florida’s employment growth relative to population slightly outpaced California, Nevada, and the US, with Arizona lagging far behind. In 2011 Florida outpaced them all by a wider margin, adding jobs a full percentage point faster than population. 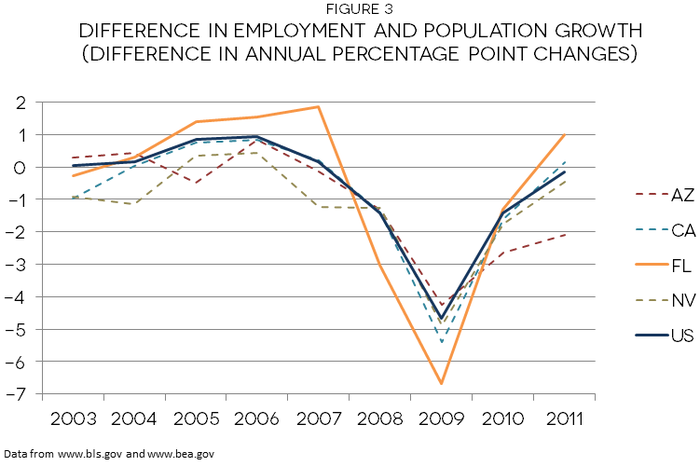 Ultimately a strong economy raises standards of living. Figure 4 shows real gross domestic product per capita, a measure of the volume of goods and services produced per resident, for Florida and the US, as well as for Arizona, California, and Nevada, presented as indices that equal 100 in 2002. Not surprisingly, Florida rose more rapidly than the US during the boom and fell more rapidly during the bust. Arizona and Nevada show the same pattern. More interestingly, California went up as fast as Florida, but did not fall as far or fast. One plausible explanation is that while construction was important in California, as it was in Florida, high productivity industries and high-skill jobs comprised a relatively higher share of the remainder of California’s economy, cushioning the blow of the housing bust.

The most relevant aspect of Figure 4 for the purpose at hand is that Florida’s real GDP per capita continued to decline in 2010, when it was increasing for the US, and in 2011, when it was increasing for the US, Arizona, California, and Nevada. Of course, given the depth of the decline in Florida, it might not be surprising if real GDP per capita turned upward later than in the other states, and it may turn out to do so in 2012. The troubling aspect of this data arises when viewed in light of Figure 3. In 2010 and 2011 production per capita in Florida grew slower than nationally while the number of jobs grew faster relative to population, and Florida compares unfavorably to other states hit hard by the housing boom in this regard. This implies the composition of jobs moved rather decisively toward low paying jobs in Florida relative to the nation in 2010 and 2011 and relative to Arizona, California, and Nevada in 2011. In addition, the fact that number of jobs grew faster than GDP implies Florida’s productivity fell in absolute terms over 2011, not just in comparison to the rest of the nation. 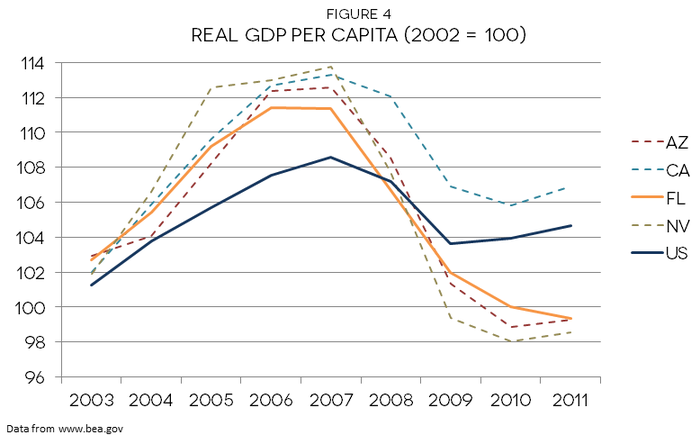 the housing boom temporarily masked what has otherwise been a two decade long downward trend in the underlying determinants of Florida’s relative income and GDP per capita.

In his recent book, The New Geography of Jobs (Houghton Mifflin Harcourt Publishing Co, 2012, an excerpt from which is available here) documents that while income in US cities converged toward the national average over time before the 1980s, it has been diverging since the 1980s. Specifically, cities that attract many highly educated workers and specialize in jobs related to innovation are pulling ahead, and others falling behind. Elsewhere, BEBR documented that the composition of Florida’s job structure moved toward lower paying jobs from 2001 to 2008 relative to the rest of the nation even as relative per capita income was increasing. That decline would have been slightly larger absent the growth in construction related employment, which paid slightly better than average. Together with the information above, this suggests the housing boom temporarily masked what has otherwise been a two decade long downward trend in the underlying determinants of Florida’s relative income and GDP per capita. Baby boom retirements, labor market polarization, and the tendency of high skill jobs to cluster together will likely strengthen this trend (see Dewey and Denslow 2012a and 2012b for more detail).

By making the kinds of world class investments in education and infrastructure that produce dynamic, productive, and attractive cities, Florida might attract high-skill and correspondingly high-paying jobs, reversing this trend.

By making the kinds of world class investments in education and infrastructure that produce dynamic, productive, and attractive cities, Florida might attract high-skill and correspondingly high-paying jobs, reversing this trend. Of course, such investments are expensive, and Floridians do not appear eager to pay additional taxes to fund them. At the same time, it seems unlikely voters have a clear vision that the choice is between bearing the expense of such investments now to create a future in which younger generations of Floridian’s participate fully in the knowledge economy or accepting a future in which Florida’s income per capita falls well below the nation’s and younger generations provide services to tourists and retirees to a much larger extent than today. Creating a clear vision of these two possible futures in the minds of Floridians, so they might make a meaningful choice among them, would seem to require a great deal of active, visible, and vocal leadership on the part of Florida’s business and education communities. Of course, even when vividly confronted with those two competing visions, Floridians may choose not to invest more heavily in the future. Absent such leadership, however, it seems almost certain we will not.