Earlier this month, as American consumers were filling their online carts during the nation’s peak shopping season, the U.S. Supreme Court again declined to rule on disputations between states and online retailers regarding the collection of state sales taxes.

Any proposed policy change regarding sales taxes is crucial to the state budget, because Florida remains one of the few states without a state income tax. Sales and use taxes are the single largest component of Florida tax collections.

Sales taxes are assessed on the retail sale of goods, repairs of property, rentals, leases, charges of admission, goods manufacturing, operating vending machines, and a very small set of services. Sales taxes are not charged on groceries, prescription medicine, most services, intangible property, or on many purchases made by an array of nonprofit organizations. In total, sales taxes are assessed on somewhat less than half of retail sales in the state. From the viewpoint of optimizing the efficiency of the sales tax, it would make sense to tax these exempt goods and services 1.) However, because the sales tax is seen as regressive (asking a disproportional share from low-income Floridians), eliminating exemptions for perceived necessities might make it appear even more so and thus such a change is unlikely. Other items and services are not considered necessities but have proven politically untouchable. The Florida legislature did enact a sales and use tax on a broad range of services in its 1987 session, only to feel the force of a fierce advertising campaign and repeal it in a special session in December of the same year.

The figure below shows the relation of taxable sales in Florida (the base for the sales tax) to both trend income and to variation in income around its trend. Annual values are divided by the (geometric) mean from 1985 to 2003 and multiplied by 100 so taxable sales and income are expressed as indices that equal 100 on average. The average over a number of years was used for the basis of comparison, rather than a particular year, so the appearance was not unduly influenced by idiosyncratic events in a single year. Years following 2003 are excluded from the base so it is not influenced by the most rapid years of the housing boom or the following bust and Great Recession. The income trend is estimated based on 1985 through 2003 only so it is not inflated by the most rapid part of the boom or impacted by the downturn. 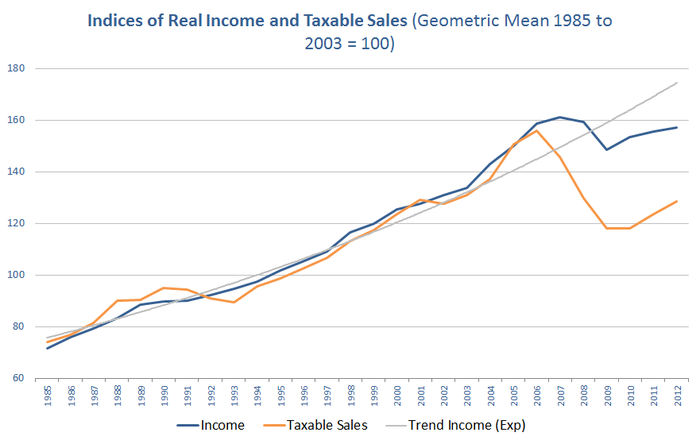 This chart is helpful in distinguishing between tax base erosion and volatility. Tax base erosion occurs when a tax base falls relative to desired revenue. Assuming desired expenditures on schools, parks and recreation, and other public services grow approximately in proportion to total income (the product of income per capita and population), tax base erosion would be marked by a systematically growing gap between taxable sales and trend income. Tax base volatility is the fluctuation of a tax base with the business cycle and potentially with other idiosyncratic shocks particular to it.

Examining the figure, taxable sales tracked trend income reasonably closely until the Great Recession of the late 2000s. Thus, the sales tax base does not appear to have exhibited much erosion. Taxable sales did fluctuate slightly more around trend income than did actual income. That is in large part because taxable sales get two bumps from population growth aside from the impact of higher population in the long run—one occurs when materials are purchased to build a residence and the other when purchases are made in setting up housekeeping. Prior to 2008, had Florida collected a personal income tax, revenues from it would have been only modestly less volatile than revenues from the sales tax. Volatility has been more pronounced over the recent business cycle due to the importance of construction in both Florida’s economy and in the magnitude of the boom and bust. At least over this last cycle, sales tax volatility was a crushing problem in Florida.

Revenues are also lost in the form of uncollected taxes on online sales (and other similar purchases) from out of state sellers. In 2008, collecting these taxes would have likely increased revenues by around $1.5 billion to $2.5 billion 2. Aside from lost revenue, not collecting those sales taxes distorts consumer choice between purchases from local brick-and-mortar establishments and online or catalog sales. That is, for any given level of total tax revenue, the excess burden would be lower if taxes on these sales were collected.

In March 2013, as the Florida Legislature was considering a bill to impose a sales tax on internet purchases, the Bob Graham Center for Public Service collaborated with the Bureau of Economic and Business Research (BEBR) to conduct some telephone polling of Florida residents about whether the state should require internet retailers to pay state sales tax. The survey found 53 percent for passage of the bill and 43 percent against, based on data collected from 608 interviews conducted March 1-31, 2013 with a 3.85 percent margin of error 3. So a majority of Floridians supported the proposed tax collection, even though it would increase their own costs as consumers.

The question of internet mega-retailer Amazon paying sales taxes in Florida was already decided earlier this year, when Amazon announced construction of two distribution centers, bringing 3,000 new jobs to Floridians 4 but causing Florida customers to pay sales tax under current law, which charges sales tax on internet purchases if the vendor has a physical address in the state.

As far as addressing the many other online retailers that sell to Floridians, taxation remedies will likely be a topic of further debate and discussion in the upcoming legislative session, especially since this month’s Supreme Court decision assures lawmakers that their actions will not be overruled. Although last year’s legislation failed, a similar bill (SB 202) has already been filed for the 2014 session.

At the national level, passage of the federal “Marketplace Fairness Act,” which would make it much easier for states to collect sales taxes on these sales, would likely help improve efficiency. Although approved by the U.S. Senate, it is unclear whether or how Congress will act on the bill.