Florida Water Use and Conservation

Florida’s estimated freshwater consumption has been on an upward trend for both public supply (utility) use and agricultural use until the year 2000, but has shown decline since then. Reasons include regulatory requirements, rate increases, more efficient plumbing fixtures, loss of agricultural acreages, and the increasing use of reclaimed water and storm water for irrigation.

Table 1. Historical Water Use: Freshwater Withdrawal by Categories of Use in Florida Specific Years 1975 Through 2010 (In millions of Gallons per Day) [1]

Following 2000, total water usage declined for both public supply and agriculture with total freshwater withdrawal decreasing by 22 %. Public supply withdrawals decreased by 8%. Population increased from 16.05 million in 2000 to 18.84 million in 2010, a 17% increase. This equates to a 21% decrease in the public supply water use per capita.

This decrease in public water consumption is due in part to conservation measures mentioned previously, but also to reductions in use due to the great recession. In the same period, agricultural irrigation decreased by 35%. While agricultural water use accounted for a larger portion (when taking into account the increase in population) of the increase in water withdrawal between 1975 and 2000, it was also a larger portion of the decrease in water withdrawal between 2000 and 2010.

These numbers are difficult to compare, as there have been methodology and classification changes in how water consumption has been calculated in Florida between 1975 and 2010. However, even without specific numbers it can be seen that water usage should be a growing concern to Floridians. Saltwater intrusion has been an ongoing concern in South Florida in recent years. Saltwater intrusion is the movement of saline water into freshwater aquifers, and occurs primarily when the water levels of the aquifers decrease. 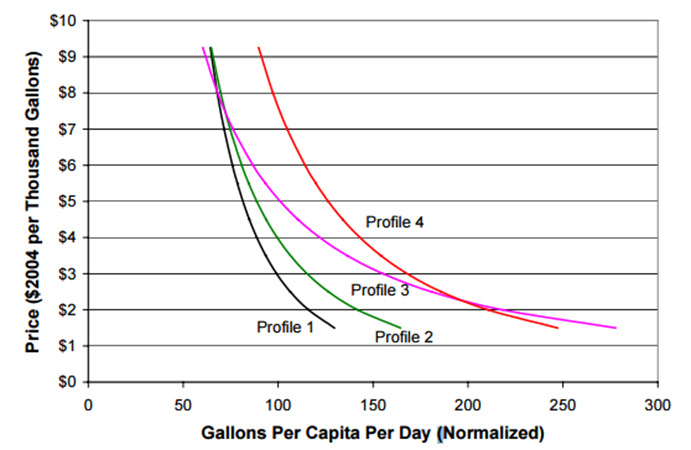 Figure 1 shows the gallons per capita per day demand for water for different property value percentiles of 16 different utilities across the state [3]. Each profile directly relates to homes of a certain property value: Profile 1 is the lowest quartile of house prices, Profile 2 is the mean of house prices, Profile 3 is the highest quartile of house prices, and Profile 4 is the highest tenth of house prices. Assuming an individual’s property value correlates to their income, Profile 2 would represent the demand preferences of a typical water consumer. For example, in Alachua County, the price of water is $2.35 per 1,000 gallons for the first 6,000 gallons [4]. A typical individual with these demand preferences would consume between one hundred and one hundred fifty gallons per day at those rates. On average in the State of Florida, the per capita daily withdrawal of public supply water was 134 gallons total and 85 gallons for residential withdrawals [1].

For water utility customers, the cost of water is determined by the fixed rate set by their local utility company. This rate is influenced by elected entities for public utilities and the Public Service Commission for private utilities. On the other hand, the cost of water for agricultural users and people with private wells depends on the cost of purchasing and maintaining equipment necessary to pump the water out of the ground. While public utility water use in the U.S. is typically subject to strict regulation, agricultural water usage is regulated more loosely.

The two prices are not perfectly comparable; the price utilities charge includes costs of extraction, treatment, administration, and may include a monopolistic rent. If utilities indeed use monopoly pricing, deadweight loss exists in the form of the monopolistic rent. Deadweight loss is the loss of total welfare to society; as a result, while some individuals may be better off under the price difference, it results in an overall negative impact on society. Lowering the price of utilities to the price of perfect competition would remove this deadweight loss. However, the profit made by utilities is historically used by the government to fund other projects that are beneficial to society. In addition, considering Florida’s current water use and conservation efforts, lowering the price of water from utilities would have a detrimental effect of increasing demand instead.

The unregulated price of agricultural water use has a negative effect on society. Agricultural water is essentially a public good; users can consume as much as they choose, given they can pay for the extraction and maintenance costs. This inevitably results in the “Tragedy of the Commons” i.e. an overconsumption of the good. The correction to this state would be to have the government involved in the pricing of water. However, raising the price of water through government regulation creates a deadweight loss for agricultural users. As a result, there is a tradeoff for government regulation of water, which should be considered when working to provide a net benefit to society.

Total irrigation withdrawals for Florida agriculture in 1990 were 1.37 trillion gallons of water [5]. Of this amount, 52% of the water was supplied from groundwater wells, for which the costs are associated with the equipment and energy used to pump and distribute water, which vary largely by location.

In terms of irrigation methods, Florida has historically been more efficient than the United States [7]. This is a result of the prevalent crop types raised in Florida, as well as the results of conservation and education efforts. However, when looking at the areas where water is used less efficiently, there are two principal reasons: cost and information. Cost goes both ways. There is a higher cost associated with more efficient irrigation fixtures, both for installation and maintenance. In addition, the cost of using more water is often overlooked since it is not a visible cost to the agricultural user. The information aspect relates to efficient water use depending on climate and soil conditions. Growers may not have sufficient information to irrigate the optimal amount in the right places, and may thus overuse water

Since agriculture uses the most water in the state, levying a tax on water use would help alleviate the decreasing supply of water in Florida. However, taxing water use may hurt the agricultural industry more than the social benefit from preserving the public good. The citrus industry, in particular, has suffered losses due to citrus greening, and a tax would be particularly burdensome. Additionally, higher water prices may lead to higher prices for agricultural products, which would have a negative impact on many households.

Thus, it would be beneficial to couple the tax with an initial grant and continuing subsidy regarding agricultural fixtures. The grant would enable to the government to set up meters to measure water usage, and allow agricultural users to purchase the more water efficient irrigation equipment. The subsidy would reduce the cost of maintenance and repair of those fixtures. A large part of the reason many agricultural users use inefficient irrigation methods is because those are less expensive, so reducing those expenses incentivizes them to use more efficient irrigation. It could also potentially allow the government to monitor water use and ensure that water use is decreasing. Of course, it is necessary to perform a cost-benefit analysis to determine the effectiveness of such a proposal, as well as additional considerations such as how large a well or irrigation fixture should be to be metered. The procurement and transportation of water is a cost that agricultural users bear, but conservation efforts have a cost as well. Naturally, they would like to use less water, but only if the cost of that water exceeded the cost of conservation.

For the efficient use and conservation of water in Florida, the government could consider expanding programs for better water management by agricultural users of water. Research could determine the efficient water use level for plots of land depending on factors such as crop demand, soil quality and composition, location, temperature, and humidity. In order to enhance the current programs, policymakers need greater insight into how to promote efficient water use from agricultural users and the costs associated with that level of efficiency. Much research has already been done on this subject, but given the vast amount of water used by agriculture and the scarcity of potable water in the state, more research is needed to ensure a sufficient supply of water for agriculture while minimizing the adverse impacts of that use.