...studies show that delinquent owners given extra time for resolution are no less likely than others to default...

If you have a home for sale, how much will you be hurt by a property within a quarter mile for which a mortgage payment is seriously delinquent or which is real-estate owned (i.e., a home owned by the lender after a foreclosure process?) Four economists at the Atlanta Federal Reserve have found that each such property will reduce your price by 1.0% to 1.5%. Beyond a quarter mile such properties have no measurable impact. Importantly, it is the stock of distressed properties that matters, not the flow. That is, one house that stays in distress (seriously delinquent or real-estate owned) for two years does as much damage as two houses that are in distress for just a year each. This is because studies show that delinquent owners given extra time for resolution are no less likely than others to default. The implication is that giving extra time damages houses by increasing the number of neighboring dwellings that are in distress.

Owners who are seriously delinquent are likely to have trouble finding cash to pay for maintenance and have little incentive to improve a property that will sooner or later be owned by the lender.

The Atlanta Fed economists report that the weight of the evidence from their data is that distressed houses reduce the sales prices of their neighbors for the reason that is also most plausible intuitively: houses in distress are poorly maintained, making their neighborhoods less attractive.  Owners who are seriously delinquent are likely to have trouble finding cash to pay for maintenance and have little incentive to improve a property that will sooner or later be owned by the lender. Once the property is owned by a bank or other lender, there is less incentive to invest in it than an owner-occupier would have since the bank’s shareholders and directors are not living in it. Making it nicer does not improve their lives directly. Not only that, there may be agency problems. The bank hires a manager to care for the house, but may not quite trust that manager to refrain from authorizing spending simply to gain a larger commission.  But without a larger commission, managers have little reason to create extra work for themselves.

New Foreclosures in the Past rOLLING 12 Months 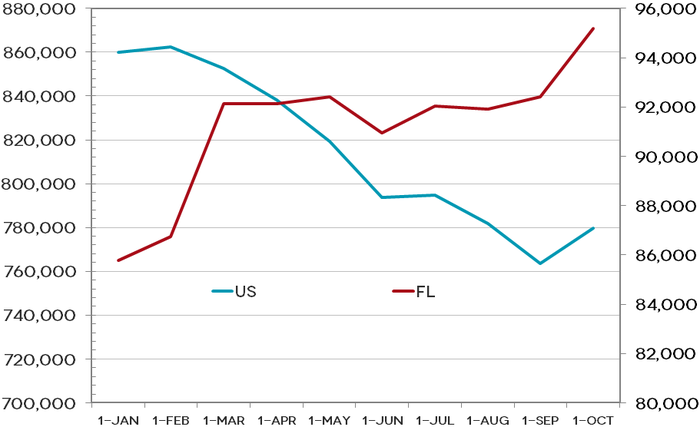 According to RealtyTrac—a website that collects and reports foreclosure data—Florida has the largest stock of foreclosures of any state. Having 310,425 foreclosed homes as of October puts the Sunshine State ahead of even California. There are several reasons for Florida’s vast stock of foreclosures. The first is that Florida is currently one of the highest states in terms of new foreclosures, coming in behind only California in October. Moreover, the vast amount of inflows from new foreclosures makes it difficult for lenders to move through the foreclosure process quickly. In the latter case Florida is actually the most troublesome state—even though California had 36,054 foreclosures in October to Florida’s 28,783, this amounted to 1 in every 312 homes in Florida but only 1 in every 379 homes in California. It is also worth noting that Florida and California were far ahead of any other state, with Illinois coming in third and having almost half as many new foreclosures as Florida. Finally, the state of Florida follows a judicial process for foreclosure filings, which prolongs the amount of time between the date of default and the eventual resale of the property. 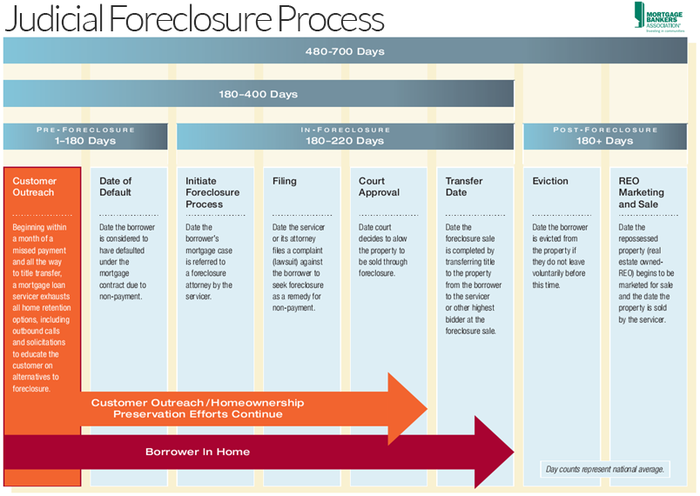 The Atlanta Fed study is based on over a million houses in 15 cities—including Miami, Orlando, and Tampa--during the years 2006 through 2010. It makes use of repeat sales methods using public records as well as proprietary information about financial details.