The eight weeks spanning late November to early January mark the observance of the holiday season in the United States. Millions of American families go shopping for the food, gifts, and decorations that we all enjoy every year. This article is an attempt to quantify the economic impact of the surge of revenue generated in this short timespan into the Florida economy. 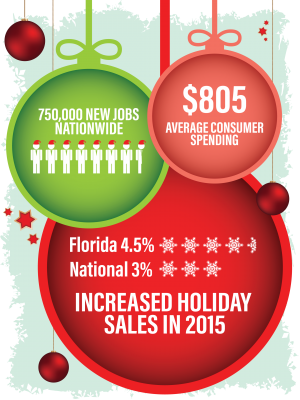 How much do we spend during the holiday season?

According to the National Retail Federation, U.S. retail sales (excluding autos, gas, and restaurant sales) in November and December are expected to increase 3.7 percent to $630.5 billion – significantly higher than the 10-year average of 2.5 percent.[1] In Florida, retail sales are expected to see a 4.5 percent increase, nearly a full percentage point higher than the national average.[2] 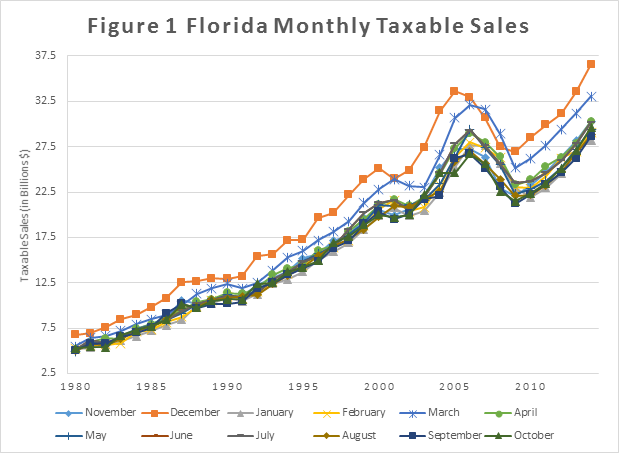 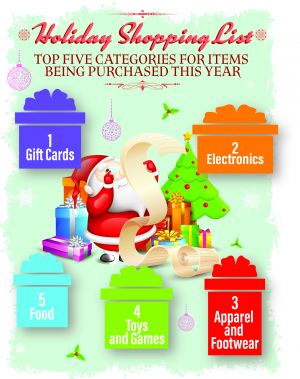 Florida’s top spending item for the holiday season (shown to the right) are led by the purchasing of holiday gift cards followed by electronics, apparel and footwear, toys and games, and food. Holiday gift card have steadily remained the most popular holiday shopping item for the past nine years across the United States. This one item accrues well over 300 million dollars in taxable sales in Florida by the end of the holiday season where taxable sales are the highest for this industry (see Figure 2). 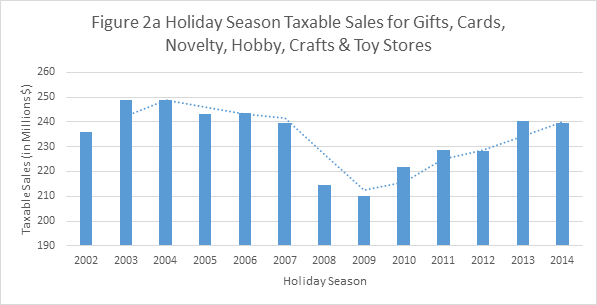 Florida retailers can look forward to celebrating a very successful holiday shopping season this year. Putting the importance of the holiday season for retailers into context, holiday sales in 2015 are expected to account for nearly one fifth of the U.S. retail industry’s annual sales of $3.2 trillion.[4] Because retail salespersons is the largest occupation held in the Retail Trade industry, it is a key indicator for the health of the retail trade industry. According to the Bureau of Labor Statistics, this occupation ranks fifth among occupations with the most new jobs in both the U.S.[5] and ranks first in Florida, with Florida expecting the addition of 45,265 news job added by 2022 with 314,200 added nationally overall.[6] Several Retail Trade industry subsectors rank in the top 20 fastest growing industries in Florida. It is true that not all occupations in Sales and Related Occupations are slated to do as well. Occupations as “gaming change persons and booth cashiers” as well as “travel agents” rank in the top 25 Declining or Slow Growth occupations in Florida. However, these occupations comprise only 0.1 percent and 0.7 percent of total sales related occupations compared to retail salespersons’ 29.3 percent share of the Florida retail industry.

One of the leading causes for Florida retailers to do so well during the holiday season is that Florida has a huge trump card over most states: tourism. According to Florida Retail Federation President/CEO Rick McAllister, “Tourism plays such an important role in the success of our state, and retailers benefit greatly from tourists choosing to spend their hard earned money in Florida, by buying gifts, supplies and mementos of their time here.”

In 2014, the Florida Department of Transportation reports that just under 99 million tourists visited Florida. Florida retailers hold seasonal promotions to cater to the surge of consumers into the state which collects billions of dollars in taxable sales from tourism. This undoubtedly plays a large role in Florida retail salespersons jobs outpacing the U.S. in expected percent change in employment with Florida leading 13.6 percent to the national average of 6.8 percent.[7]

The “index of retail activity” created by the Office of Economic and Demographic Research is designed to provide a measure of retail activity for the various Metropolitan Statistical Areas (MSA) and allow comparisons with other MSAs over time. As shown by Figure 3, retail activity in Florida has been steadily increasing since the Great Recession, surpassing pre-recession highs by nearly 30 percent.[8]

“Florida continues to see a strong increase in its economy thanks to record-setting tourism, increased consumer confidence, a surging real estate market, and a seven year low in unemployment, all of which mean big expectations for retailers this holiday season,” says McAllister. A large portion of economic activity in the United States comes from the purchase of clothing, healthcare, durable goods like cars/furniture, and holiday shopping.[9]

With an expected increase in disposable income and employment growth of 12.4 percent between 2014-2022, all signs point to the currently healthy demand for holiday items being sustained if not increased over the next couple of holiday seasons.[10] As consumers continue to spend each holiday season, the retail industry responds with the hiring of new workers and an increase in wages and salaries. Since the end of the Great Recession in 2009, wages and salaries have surpassed its pre-recession levels in the retail trade industry and are trending upward (see Figure 4).[11]  With retail salespersons ranked first in Florida among occupations with the most new jobs and 13.9 percent growth by 2022 we can only expect the retail industry to contribute even further to Florida’s GDP.[12] As it stands now, consumer spending accounts for three quarters of GDP and the retail industry which heavily contributes to consumer spending receives 20 to 40 percent of its annual sales in the holiday season alone.

“Skeptics may point to these holiday jobs as being temporary employment, but every temporary job has the potential to turn into a permanent one and provide someone with a chance to make consistent money for their family,” said McAllister. “Retail still remains the best industry for young, new or returning workers to find employment, learn valuable skills and grow themselves professionally.” 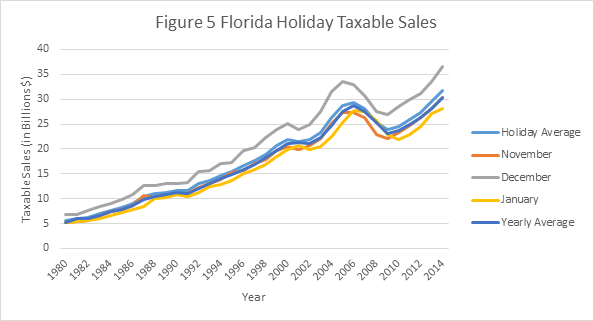 [8] The index is constructed in order to smooth the volatility in the taxable sales data and thereby allow comparisons of one MSA to others on a monthly basis. The index is constructed by aggregating the categories of autos and accessories, other durables, tourism and recreation, and consumer nondurables. This grouping represents the bulk of non-investment spending and is analogous to personal consumption. The sum of these four categories is seasonally adjusted and a four month moving average is taken. The bases period of January 2000 equals 100.