“Consumer confidence falls in Florida” reads a recent headline. While headlines like this provide a general overview of current economic conditions in Florida, they do not offer much insight into how respondents’ demographic groups influence their perceptions of the economy. However, the monthly Consumer Sentiment Index (CSI) releases from the Bureau of Economic and Business Research (BEBR) also provide data broken down by the respondent’s gender, income, and age. This article uses gender disaggregated CSI data to examine the relationship between respondents’ gender and their perceptions of the economy in the post-Great Recession years.

The CSI survey includes five questions targeting respondents’ perception and expectations of personal and national economic conditions. From these answers, respondents receive a score from 2 to 150. The data released is then a simple average of these responses. If female respondents’ had lowered expectations for the economy, their responses could decrease the monthly index. An advantage of this measure is that it does not assume any one gender’s behavior and perceptions as the norm.

Previous studies have found that female respondents’ consumer confidence is often lower than that of male respondents. A pre-recession study analyzed the results of the University of Michigan Consumer Sentiment Index surveys by a variety of demographic groups, including gender. They found that, “groups with relatively lower income are significantly less optimistic and have lower assessments of the current state of the economy than their complements.”[i]  Previous studies that investigated differences in demographic groups found evidence that members of these groups process economic information differently and are more likely to experience “group-specific shocks.” This means that women, especially those from lower-income families, often experience fluctuations in the economy earlier than men. They are also more affected by changes in the economy.

We analyzed CSI data from the post-recession period (January 2008 to December 2014) using a linear regression with a binary variable to examine the relationship between respondents’ gender and their perceptions of the economy. The binary variable indicated whether or not the corresponding CSI reading was a male or female average. This method was used for analyzing the overall CSI and the five survey questions listed in the table below.

The difference between women and men’s responses were statistically significant for the overall CSI. 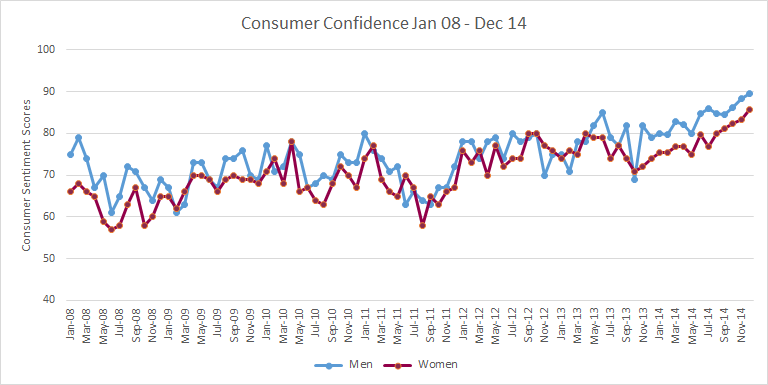 It was also statistically significant for survey questions about expectations of one’s personal financial situation one year from now, perceptions of one’s personal financial situation compared to a year ago, and perceptions of good buying time. Though these differences were statistically significant the coefficient of determination, the percentage of the variation explained by the dependent variable, was relatively low. This is not surprising as our experiences are defined by more than our gender. Perhaps one’s socio-economic class or race would have more of an effect on one’s perception of the economy. 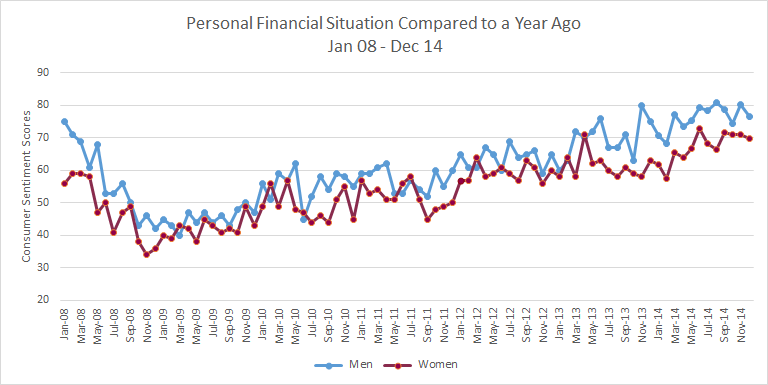 Figure 2. Personal Financial Situation Compared to a Year Ago from Jan 2008 to Dec 2014

There was not a statistically significant difference in responses related to expectations of the national economy in the next year and the next five years. Since these responses are related to a respondent’s access to information and education, this suggests that men and women have similar levels of information and education. The graph below shows the observed difference in men and women’s responses over time.

There are a variety of reasons for gender differences in consumer sentiment and spending. One factor is the role of gender dynamics and socioeconomic status.

Understanding differences between men and women’s perceptions of the economy requires an exploration of gender dynamics in the U.S. and more specifically in Florida. Women in the U.S. face additional gender-specific obstacles in the workplace and their personal relationships.  According to the most recent report on the Status of Women from the Institute of Women’s Policy Research[ii], Florida ranks as the 47th worst state for women, tied with Texas. This ranking was determined by considering a several rankings on topics like employment and earnings, poverty and opportunity, health and wellbeing, reproductive rights, violence and safety, work and family, and political participation.

Working women in Florida typically earn anywhere between 59.2% (Hispanic) and 79.2% (White) of what men earn. Nationwide, roughly a third of women experience physical violence from an intimate partner and roughly half of women experience psychological violence. The experience of intimate partner violence greatly affects one’s productivity and employability in terms of work as well as their general safety. Although there are many issues Floridian women face, these examples are major deterrents to women’s economic stability and hence their expectations of their personal financial situation in the future. These barriers may vary for women based on their race, age, or level of income.

In pre-1990 discussions on whether or not consumer sentiment may predict future spending, academics argued that consumers’ behavior was predicted by the permanent income hypothesis or the life-cycle hypothesis. This theory assumes that consumers considered the total income accrued over their lifetimes when making spending decisions.

In the early 1990s, it was suggested that not all households spend in this way and may instead base financial decisions on current income levels. Lower household income levels leads to higher economic sensitivity. Thus, women and households headed by women may adjust their spending to this “rule of thumb” consumption leading to greater variability.

Considering that these data starts at the beginning of the Great Recession, it is likely that many households adjusted their spending to meet their income, regardless of gender. During the Great Recession, American consumers reduced spending in nearly all categories including nondurables, like groceries. Consumer spending took a long time to fully recover from major market change.

Different economic perceptions between men and women could also be the result of marketing failures. A report by the Boston Consulting Group in 2009 found that women were greatly underserved in terms of products and marketing[iii]. Perhaps if products are not being made with women in mind, women will be less likely to make any purchase if they cannot find something which satisfies their needs. This could also result in a decline in women’s spending.

PAGO.  We are interested in how people are getting along financially these days. Would you say that you (and your family living there) are better off or worse financially than you were a year ago? (Answer choices: better off, same, worse off)

BUY.  About the big things people buy for their homes -- such as furniture, refrigerators, stoves, televisions, and things like that. Generally speaking, do you think now is a good or a bad time for people to buy major household items? (Answer choices: good time, uncertain, bad time)

PEXP.  Now, looking ahead -- do you think that a year from now you (and your family living there) will be better off financially, or worse off, or just about the same as now? (Answer choices: better off, same, worse off)

BUS12.  Now turning to business conditions in the country as a whole -- do you think that during the next 12 months we'll have good times financially, or bad times, or what? (Answer choices: 1 Good times, 2 Good with qualifications,3 Uncertain; Good and Bad, 4 Bad times, 5 Bad with qualifications)

BUS5.  Looking ahead, which would you say is more likely -- that in the country as a whole we'll have continuous good times during the next five years or so, or that we will have periods of widespread unemployment or depression, or what? (Answer choices: 1 Good times, 2 Good with qualifications,3 Uncertain; Good and Bad, 4 Bad times, 5 Bad with qualifications)