In 1955, North Carolina trucking entrepreneur Malcom P. McLean bought a steamship company with the idea of transporting truck trailers with the cargo still inside. He realized that efficiency could be vastly improved if cargo could be placed in one container that was lifted from a vehicle directly onto a ship without first having to unload it. His ideas created the system of "intermodalism," in which the same container, with the same cargo, with minimum interruption, could be moved seamlessly between ships, trucks, and trains during its journey. This greatly simplified logistical process eventually led to a revolution in cargo transportation and international trade. In 1961, the International Organization for Standardization (ISO) set standard container sizes. The 20-foot container, referred as a Twenty-foot Equivalent Unit (TEU), is the industry standard reference, and cargo volume and vessel capacity are now commonly measured in TEUs. The 40-foot container—2 TEUs—known as the Forty-foot Equivalent Unit (FEU) is the most frequently used container. By the 1980s, the introduction of double-stack trains further streamlined the intermodal system. Today more than 70% of general cargo moves in containers.

In 2014, the Panama Canal will celebrate its 100th anniversary with the expected completion of a massive expansion. By adding a larger set of locks and widening the channels, the canal will accommodate ships three times the current maximum, doubling current capacity. Container ships that transit the Panama Canal are referred to by the maximum number of TEUs they can carry and still pass through the locks. The current maximum container capacity of 4,800 to 5,000 TEUs is referred to as Panamax. Ships capable of carrying up to 7,000 to 8,000 TEUs are referred to as post-Panamax. New Panamax ships, capable of carrying 12,000-13,000 TEUs will begin using the new locks and enlarged canal to access east coast ports. As the container industry captures more of the shipping market and the container fleet continues to grow in size and number, the ports that accommodate the larger ships with deeper channels and increased container capacity will be the big winners. The majority of the new container shipping fleet currently on order is post- and new-Panamax, including some with an 18,000 TEU capacity. Ships requiring 50-foot-deep channels will soon comprise almost 50% of the global container shipping fleet capacity. Currently, no port in Florida can handle that deep draft requirement.

To the CEO of the Panama Canal Authority, Alberto Aleman Zubieta, speaking at the MODEX 2012 logistics conference in Atlanta, it is clear that infrastructure projects directly related to intermodal transportation needs must be completed to take advantage of the new opportune cargo. The question isn’t about the need to deepen the channels in Miami, or Jacksonville, or any other east coast port—all of the U.S. east coast ports should be expanded. Currently, only one east coast port has post-Panamax channel depths—Virginia. The ports of New York and Savannah are in the process of dredging. Mr. Zubieta believes the big question is whether the ports will have the highways, railroads, and distribution centers to accommodate cargo delivered to and from the new generation of big ocean-going vessels. “Some ports are going to take advantage,” he said. “Norfolk is ready . . . . Rail has been modernized between Norfolk and Chicago; they understand the benefit of getting cargo to its destination.”

The Port of Miami, Port Everglades, the Port of Jacksonville and the Port of Palm Beach rank among the nation’s top 20 container ports.

The majority of the container trade goes through the Ports of Los Angeles, Long Beach, and Oakland California. The three ports combined account for just under 40% of all container movement in the United States. The east coast Ports of New York/New Jersey, Hampton Roads, Charleston, and Savannah comprise 27%, and the combined Atlantic Ports of Florida capture just over 6% of the total movement.  The Gulf of Mexico is dominated by Houston and New Orleans, with a combined 80% of the movement, leaving Florida with 3% of the Gulf market. Florida’s seaports moved 2.84 million TEUs in FY 2010, the Florida Ports Council expects to reach 4.14 million by FY 2014. The Port of Miami, Port Everglades, the Port of Jacksonville and the Port of Palm Beach rank among the nation’s top 20 container ports. Florida accounts for 7% of the total U.S. container movement; 97% of Florida's container traffic is on the Atlantic Coast, comprising 16% of the total Atlantic Coast traffic.

Already the ports along the west coast are feeling the threat of the expanded canal. It costs much less to move cargo by ship directly to the eastern seaboard ports that serve some 60% of the U.S. population. The only edge the west coast ports have, besides their tremendous size, is that train transshipment across the country potentially saves one week of time. That week can be vital for some goods that are time-sensitive, but with an already strained infrastructure and limited room to expand the train yards or ease highway congestion for the trucks, there is time for Florida’s Ports to take advantage of the new opportunities that the expanded canal will offer. Currently, almost half the containers from Southern California’s ports head to the east coast. With a combined 14,095,401 TEUs in 2010, potentially 7 million TEUs can be up for grabs.

Florida’s ports have lagged behind the other major east coast ports in capturing the expanding container market. With less than 10% growth in the last 10-year period—and only the ports of Jacksonville and Everglades making up that growth as Palm Beach and Miami lost share—the time is fast approaching where even larger growth may potentially be missed.

Florida’s ports have lagged behind the other major east coast ports in capturing the expanding container market.

Whether Florida is able to accommodate the ships requiring a 50-foot channel depth or not, the 50% of the global shipping fleet with drafts less than 50 will have to go somewhere. If the east coast ports to the north of Florida are able to monopolize the larger ships, Florida’s ports will still have the opportunity to take advantage of the remaining container vessels. The average annual wage of seaport-related jobs is approximately double the average annual wage for all other non-advanced degree occupations and up to 40% more than the average annual wage for all occupations. With foreign trade at 13% of U.S. GDP in 1990 and forecast to grow to 35% of GDP by 2020, the state of Florida’s ports, rail, and highways will have a direct effect on how much of that future prosperity Floridians are positioned to capture. It is important that Florida allocate its funding and resources efficiently. The opportunity to create good wage jobs, increase local and state tax revenue, and create infrastructure improvements through funding and support of our ports is a very real option. 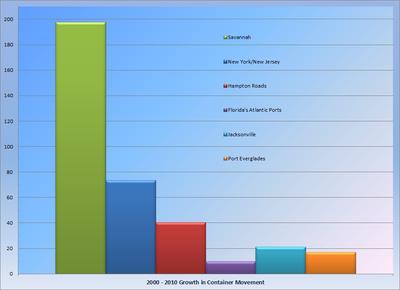