Over the last three decades, the share of US workers in the occupations that used to constitute the middle of the skill distribution, for example bookkeepers, declined. At the same time, real wages have risen most for those with the highest levels of education, have been stagnant for high school graduates, and have fallen for high school drop outs. Autor (2010) provides an accessible empirical discussion of this pattern of labor market polarization, and Thomas Friedman and Michael Mandelbaum provide a non-technical summary of the current understanding of polarization in their best-selling book That Used to Be Us: How America Fell Behind in the World It Invented and How We Can Come Back. This article documents the extent of polarization in Florida’s labor market and considers some potential implications for Floridians, in particular whether low-skill jobs are more likely to replace vanishing mid-skill jobs in Florida than in the rest of the nation. Details regarding the analysis summarized here may be found in Dewey and Denslow (2012b).

For the purposes of this article, understanding polarization requires understanding the roles of the demand and supply of skilled workers, differences in the types tasks involved in various jobs, and the ways computerization and automation more easily substitute for some tasks than others. Golden and Katz (2008) show that for many years, as technology and international trade increased the demand for skilled workers relative to the less-skilled, increasing educational attainment boosted their relative supply just as fast. The high school movement, the G.I. Bill, and higher graduation rates for women all contributed to this increase in supply. In the early 1980’s, however, the growth of educational attainment slowed while technology continued its rapid advance—education started losing the race with technology. This slowdown in the growth of educational attainment explains the growth in the pay of the skilled relative to unskilled workers.

Understanding the decline in the share of workers in jobs that previously constituted the middle of the skill distribution requires thinking in terms of three types of jobs defined by the kinds of tasks they involve: analytical, routine, and manual but non-routine. Analytical jobs require the ability to think abstractly or creatively, to communicate complex ideas clearly, and to handle fuzzy concepts (e.g. accountants and engineers). Non-routine manual tasks are those that require dexterity and context sensitivity (e.g. landscaping and cooking). These jobs tend to be relatively low-skill but are hard to automate. Routine jobs are those that can be largely replaced by software, symbolic processing, or other forms of automation (e.g. bookkeeping and inventory control). A job is likely to involve several tasks, some of which can be easily replaced by software (organizing data) or offshoring (radiography, though there is not a lot of that off-shored). Off-shoring may substitute for tasks across the skill spectrum, in contrast to information technology, which substitutes mainly for those in the middle. (Blinder, 2009) As computer software and hardware have become increasing powerful, the share of routine jobs which used to constitute much of the middle of the skill distribution has shrunk. Workers displaced from routine jobs may readily shift into many manual non-routine jobs, such as those in personal services, but without improving their skills would find it hard to shift to analytical jobs. This results in a further boost in the supply of workers to low skill jobs relative to high skill jobs, putting additional downward pressure on the relative pay of low skill workers relative to the most highly skilled. 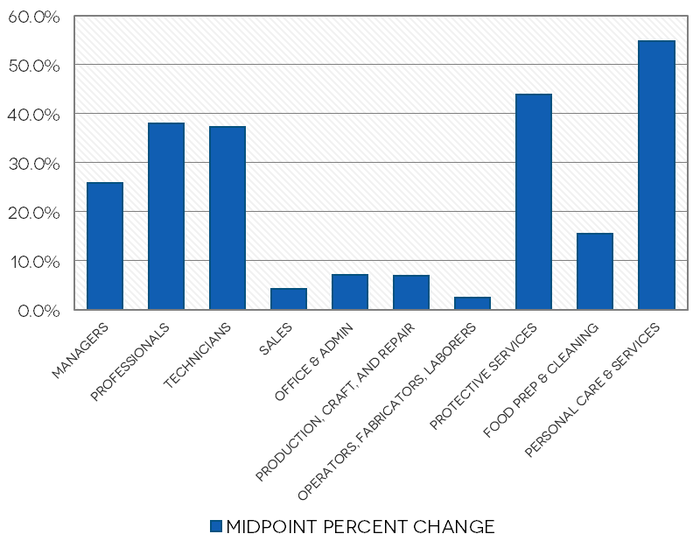 Using data from the Current Population Survey (CPS), Figure 1 shows the (midpoint) percentage change in employment from 2000 to 2010 by job type. Employment rose 25% or more for managers, professionals, and technicians at the high end of the skill distribution, and over 40% for protective services and personal care and services at the low end. For food preparation and cleaning the gain was 15%. For routine jobs in the middle—sales, office and administration, operators, and fabricators—employment gains were well under 10%. This closely mirrors the U.S. pattern of job polarization.

Figure 2 shows the percentage point change in the employment to population ratio in Florida from 1980 to 2010 by sex and education. For men, the employment to population ratio fell in all educational categories. The declines for dropouts and for those stopping with high school diplomas were especially dramatic, falling from 72.62% to 57.45% for high school graduates and from 49.4% to 35.86% for dropouts. For women, workforce participation fell for the lowest education levels, but increased for those with at least some college. Relative to the national pattern shown in Autor (2010), labor force participation generally fell more or grew less, often by a wide margin, in Florida. The social and economic implications of such a large across-the-board drop in workforce participation, especially for males, are poorly understood. However, falling labor force participation coupled with stagnant or falling educational attainment is unattractive to firms that might bring high-skill jobs. In turn, the lack of high-skill jobs is likely to fuel further declines in human capital investment and in labor force participation.

The pattern of relatively larger declines in workforce participation at lower education levels is consistent with a stronger tendency for vanishing mid-skill jobs to be replaced by low-skill jobs rather than high-skill jobs in Florida relative to the nation. The reason this pattern might be expected is that workers displaced from the middle can move down in skill more easily than they can move to analytical jobs. If there is relatively less growth at the high skill end of the distribution than at the low end, workers will shift down the skill distribution, with more workers with less education being pushed out of the labor force by competition from more educated workers moving down the skill distribution. Apparently, as Florida’s workforce polarizes mid-skill jobs have been and likely will continue to be disproportionately replaced by low-skill jobs.

Figure 3 shows real wages in Florida by sex and educational attainment for 1980 and 2010. For men, real wages stagnated over the past three decades, except for those with professional and advanced degrees. Females without college degrees showed modest real wage gains, while females with college degrees experienced substantial real wage gains. For females, the largest percentage gain was for those with a four year degree, but the largest gain in absolute terms was for those with advanced degrees. While these findings largely mirror those reported by Autor (2010) for the nation as a whole, Florida actually fared somewhat better overall in terms of percentage of real wage growth, particularly among the lower three education categories. This suggests the increase in demand for non-routine manual jobs due to polarization was magnified in Florida, likely by the demands created by retirees and tourists.

Real Wages in Florida, by Sex and Year (figure 3)

In Florida, will high-skill or low-skill jobs replace those that used to make up the middle? High-skill jobs are attracted to cities with existing concentrations of high-skill jobs because high skill workers are more productive and earn higher salaries in such cities. Florida’s historic lack of such cities suggests the state will have a hard time replacing lost mid-skill jobs with high-skill jobs. The coming baby boom retirements, which will increase the relative demand for low-skill jobs, will reinforce this tendency (further discussion of this may be found in Dewey and Denslow 2012a). Of course things may change. For example, unforeseen changes in technology may alter labor market dynamics in a way which reverses these patterns. But barring such developments, and assuming Florida does not undertake very aggressive public investment in infrastructure and education, current trends suggest average job skill in Florida’s cities is likely to fall increasingly behind that of cities at the forefront of the knowledge economy over the next decades.

[2] Autor, David, “The Polarization of Jobs Opportunities in the U.S. labor Market: Implications for Employment and Earnings,” Center for American Progress and The Hamilton Project, May 2010.