In 1995 the total crime rate in Florida was higher than ever since, as measured by the Total Index Crime (TIC), the summation of all “Index Crimes” measured by the FBI, which are murder, forcible sex offenses (including rape, forcible sodomy, and forcible fondling), robbery, aggravated assault, burglary, larceny, and motor vehicle theft. Measured by the TIC, crime steadily decreased in Florida from 1995 to 2015, only seeing slight increases in 2007 and 2008, and large decreases the rest of the time. [3] 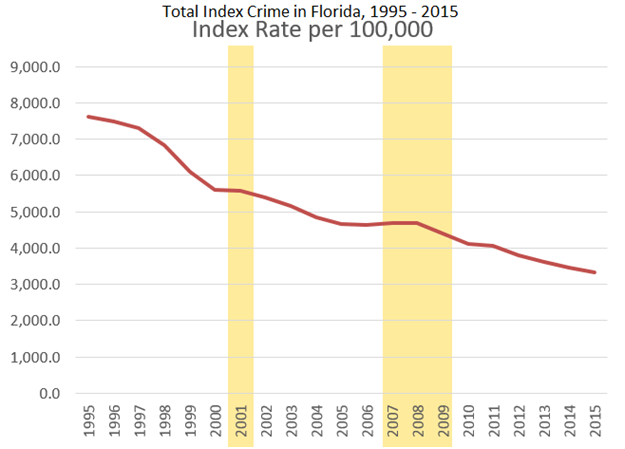 It is easy to think that recessions lead to crime because of the associated increase in the unemployment, but that is not suggested by the available data in Florida. While Florida’s gross domestic product and real per capita income fell during the early 2000s recession and the Great Recession in 2008, the total crime rate did not reflect a large increase during those times, only increasing by 1.4 and 0.1 percentage points in 2007 and 2008, respectively. 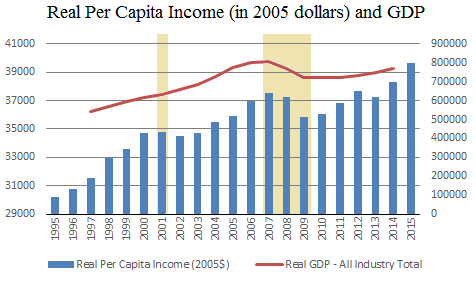 This suggests that if the economy and crime rate are correlated, such a link likely is not very strong. In fact, recent explorations of the subject by the University of Florida Bureau of Economic and Business Research reveal that there may not be a correlation at all. Bohorquez, Garcia, and Sandoval concluded that there was “no significant association between the crime rate and the unemployment rate,” [2] further disputing a direct connection.

Despite these recessions, the overarching trend in the TIC is downward. Why might this be? There are many potentially causative factors, such as increased incarceration, shifts in the relative size of the most crime-prone demographics, “broken window” police policies (which address incidents of urban disorder and vandalism in order to create an atmosphere of lawfulness that may prevent more serious crimes), education level changes, and more. This study will deal with the former two. Identifying causes for this crime decline is important to Floridians for multiple reasons, and policymaking comes to mind as an especially important example of such an area.

It is intuitive to attribute the falling crime rates to increased incarceration. Fewer offenders roaming free would lead to less crime, presumably. Such a statement is not clearly supported by the statistics available, however. 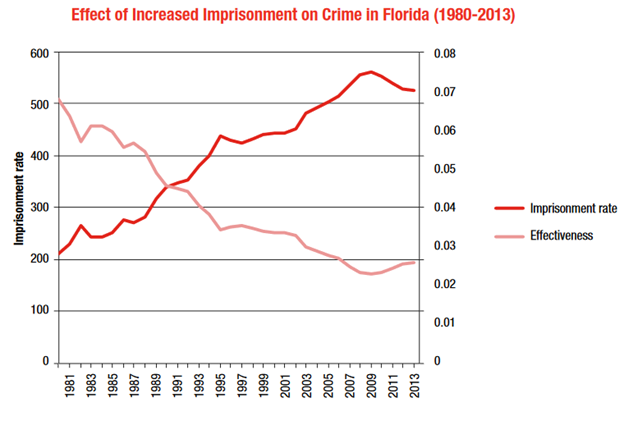 A Florida crime drop study from Bales[3] shows that the largest imprisonment rate increases occurred in the 1980s with a 63.5% increase. While most of the crime rates that make up the total crime rate did not begin falling until the 1990s, murder is the only crime of those comprising the total index crime that began decreasing as early as 1981 and never returned to similar heights. The murder rate begins to increase near the end of the 2000s, despite the steadily increasing incarceration rate. If incarceration was one of the causes for the falling murder rates, the diminishing returns of incarceration may soon become outweighed by other factors that could cause the murder rate to climb. 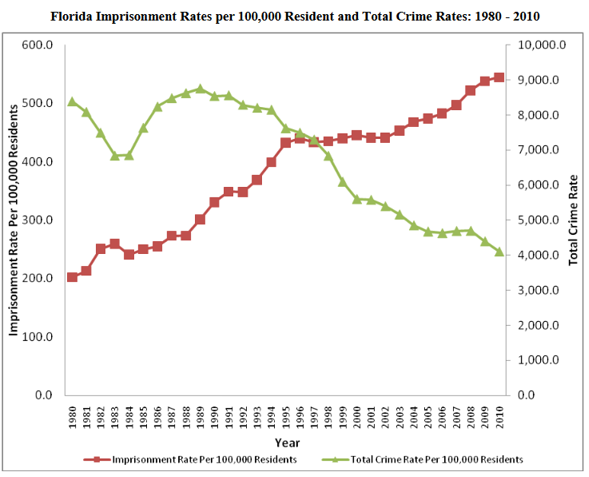 Various demographic groups are at different risk of engaging in criminal activity, so it stands to reason that if the portion of the population most at-risk of criminal activity decreases, so will the crime rate. For this reason, it is worth examining shifts in the proportion of the population that is made up of the demographic group most likely to commit crime, and identify any relationship between these shifts and changes in the crime rate. Data from 1986 show that 72.4% of all Florida arrests from that year were of people at least 15 years old and at most 34 years old. The Florida Department of Law Enforcement's Uniform Crime Report (UCR) Arrest Data from 2010 show that 26.3% of Part I arrests involved Blacks or African Americans (while Blacks or African Americans only made up about 16.9% of the Florida population in 2010), so Bales finds it reasonable to think that a shift in the proportion of Florida’s population that is made up of Black or African American males age 15 to 34 may have an effect on the crime rate. A decrease in the population of Black or African American males between the ages of 15 and 34 seems unlikely to have caused much of the crime decline, since the relative population of that demographic has remained relatively level since before the decline began until 2010. 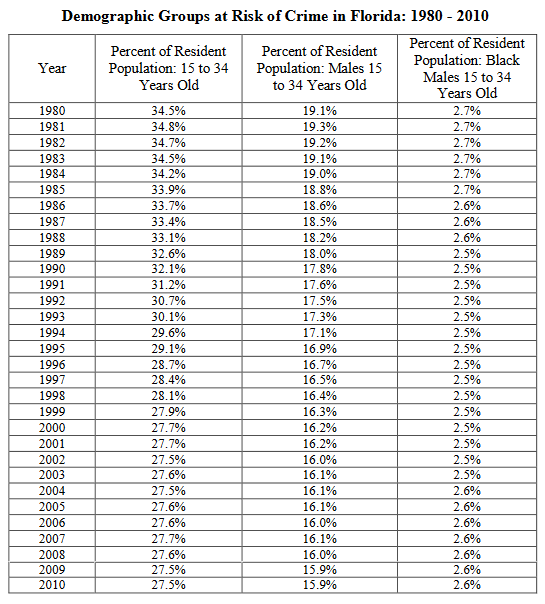 American Community Survey data from 2005 until 2015 show that the proportion of the Florida population made up of black males between 15 and 34 years old increased from approximately 2.1% to approximately 2.5%. The TIC during those years was falling consistently, except for the very slight increases in 2007 and 2008, further supporting the idea that shifts in the proportion of this demographic making up the Florida population may not be a significant driver of change in the TIC.

Both the male and total portions of the Florida population between the ages of 15 and 34 seem a more likely explanation, as their sizes have fallen significantly since 1980. [3] [4]

It has been argued that the aggregation of violent crime data can obscure important trends. This means that looking at the total crime rate as a whole may limit the scope of analysis possible, and this can be investigated further in the future. [5]

If the falling crime rates are not simply due to increased incarceration and demographic shifts have a limited effect, the issue will need further study. Most likely, there is no single solution that, when effectively applied, resulted in this powerful long-term decline. While the decrease in the relative size of the population between the ages of 15 and 34 may have had a larger effect on the crime rate, it likely only played a small role in its reduction. Extensive research has been done on many potential causes and continuing review of that research should lead to insights.

[3] Bales, William D. "The Crime Drop in Florida: An Examination of the Trends and Possible Causes." Florida Sheriffs Association. https://www.flsheriffs.org/uploads/FLCrimeDropStudy_Bales4_15_12.pdf.

ACKNOWLEDGEMENT:  The artwork was modified from a photo by www.JobsForFelonsHub.com under a Creative Commons 2.0 Attirbution license.