Poverty and Income in Florida

The poverty rate is a key economic indicator often used to evaluate current economic conditions and how economic well-being changes over time. It’s an important indicator that affects not only the general public perceptions of well-being, but also public policies and social programs.

The current poverty measure compares families’ annual pre-tax money income against a poverty threshold to determine whether or not they are poor. The thresholds are dollar amounts that differ by family size and ages of the members. In 2014, the poverty threshold for a family of four, two children and two adults, was $24,008, for example.1

In year 2014, the most recent year for which data are available, the official national poverty rate was 14.8 percent, which translates to 46.7 million people in poverty. The poverty rate in Florida was 16.7, and it was 4.2 percentage points higher than 2007, the year before the most recent recession. 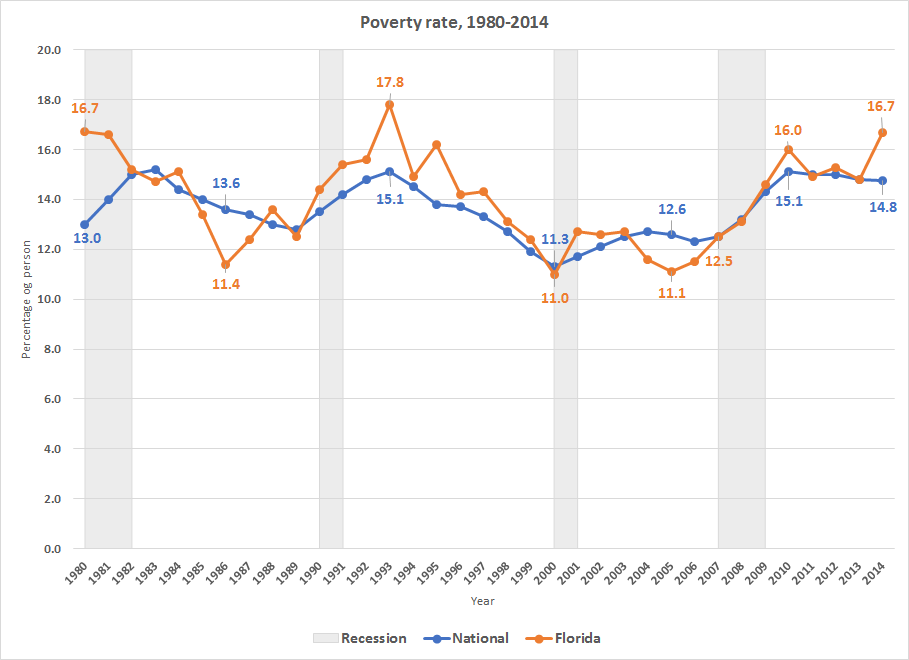 In year 2013, the most recent year for which county-level data are available, the poverty rates in Florida’s counties ranged between 9.6 to 33.9 percent, corresponding to St. Johns and DeSoto counties, respectively. The map below shows that the higher poverty rates were located in the north part of the state, with the exception of DeSoto and Hardee. The lowest poverty rates were mainly concentrated on the south and east part of Florida. 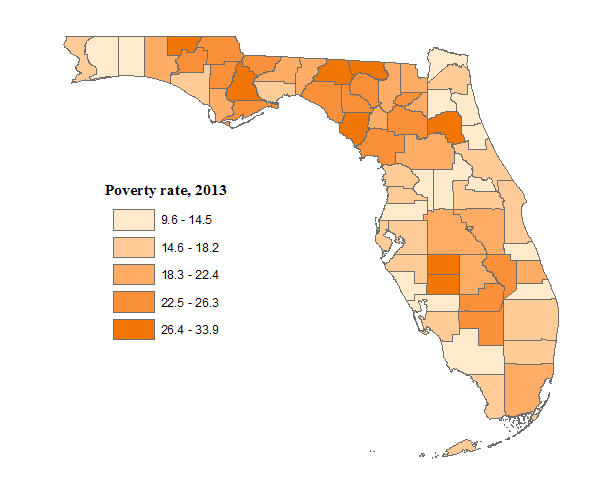 Although the poverty rates were higher in the north, it’s worth noting that three southern counties concentrated one-third of Florida’s 3.2 million of poor. In 2013, 0.55 million of poor were located in Miami-Dade, 0.28 million in Broward, and 0.20 in Palm Beach. Table 1 shows the rank of Florida’s counties by the total population in poverty. The first 6 counties (adding Orange, Hillsborough, and Duval to the list) concentrated almost half of the population identified as poor; and the first 12 counties two-thirds of the state total. 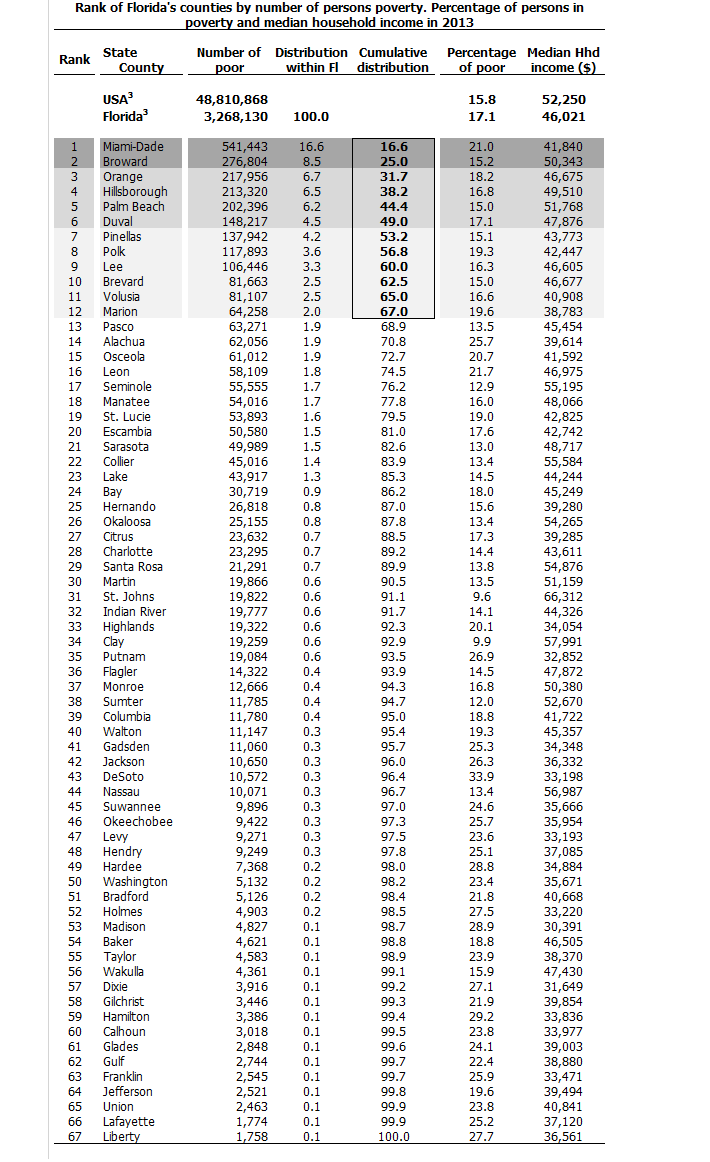 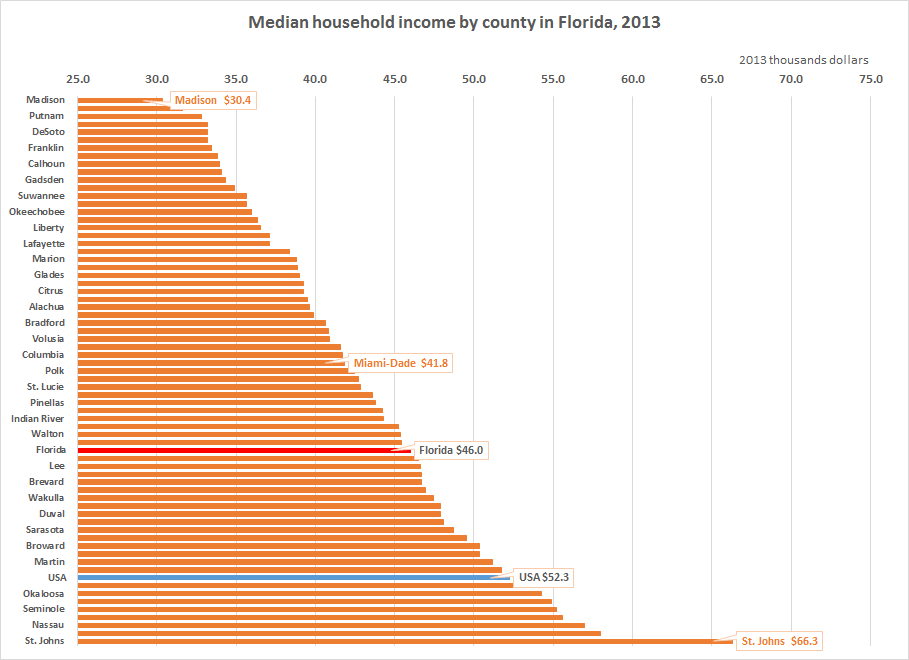 2According to the information in the Current Population Survey (CPS), the national poverty rate for the years from 2005 to 2007 are: 12.6, 12.3, and 12.5; and for Florida: 11.1, 11.5, and 12.5. The information from the American Community Survey (ACS), which is a better source for poverty rates at the state level, confirms that Florida’s poverty rates are below the national level in the years previous to the recession and the substantial increase between 2007 and 2010 (see Figure 3 below).

3Numbers differ from the national official estimates which use the CPS-ASEC as a source of information. 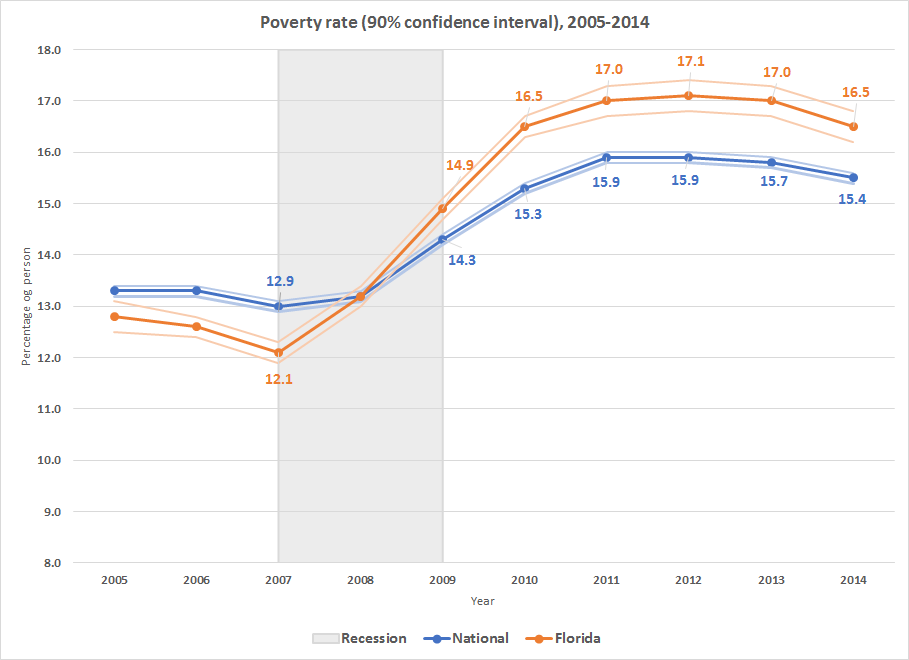 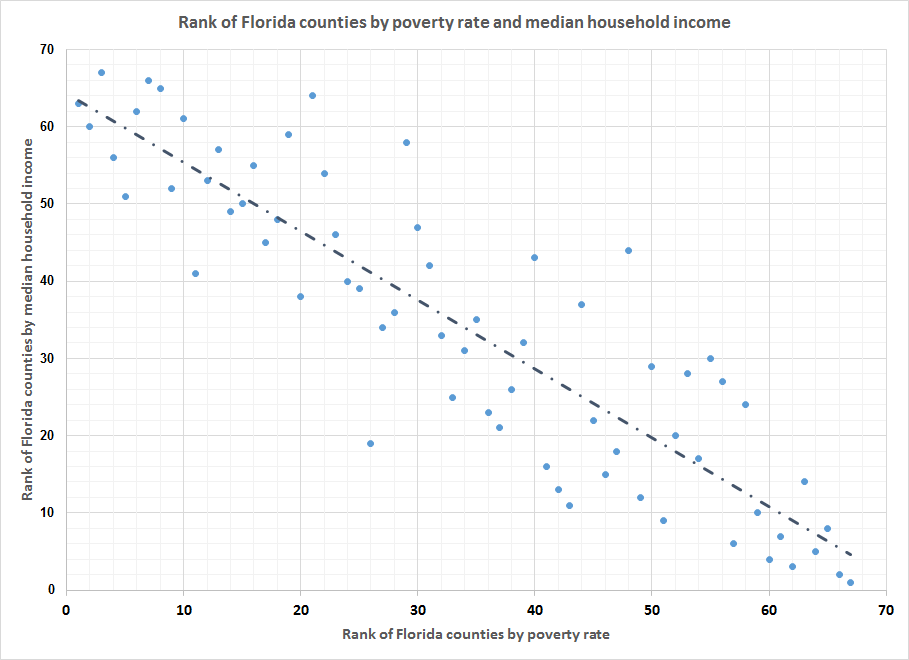