Read any financial news site these days, and you will see quite a bit about the Federal Reserve’s policy and its effect on interest rates. Investors are alert for signs that the Board of Governors is ready to hike rates, and this is perhaps the main driver in U.S. stock markets at present[1]. In the case of financial markets, the general idea is that quantitative easing (QE) and a low federal funds rate translate into a larger money supply, much of which is pumped into financial markets. The Federal Funds rate is the interest rate at which depository institutions lend reserve balances to other depository institutions overnight. A target rate is set by the Federal Reserve and maintained by Open Market Operations. But another important question is how this will affect Florida’s real estate market, which is still limping along after the great recession---the median sales price of homes sold in the Sunshine state is up 11.6% in the past year but as of March 2015 still down nearly 24% from the peak in February 2007, ranking the 5th worst of any state[2]. An interest rate hike by the Fed would likely raise the rates that banks charge home buyers for loans, possibly putting downward pressure on demand for new and existing homes in Florida. But will this effect on demand be substantial? Should home-owners and potential home-buyers be as concerned as stock-market investors? 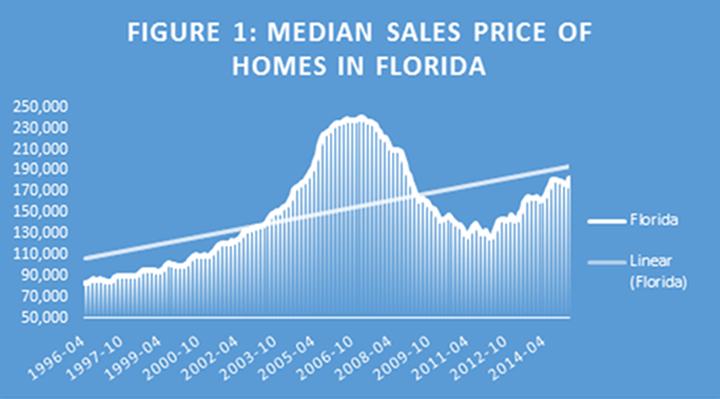 First, it is important to understand the current real-estate market conditions in the Sunshine State. Although homes are selling for less than they were at the height of the boom, Figure 1 suggests that home prices are converging to where they should be, based on the linear trend over the past 20 years or so. Moreover, single-family home sales fell from more than 248,000 in 2005 to just over 124,000 in 2008, but recovered to more than 244,000 last year[3]. However, as of March 2015 all-cash buyers still represented 39% of the sales in Florida, as opposed to 24% nationally[4]. The good news is that the share is down from March 2014, when all-cash buyers represented 45% of the sales in Florida and 33% nationally. Additionally, shadow inventory in Florida has fallen since September 2009, with the rate of decline picking up momentum as of June 2012. Shadow inventory includes all loans and properties in the state and is defined as the sum of all loans 90 or more days delinquent or already in foreclosure, and real estate owned by banks. Taken together, these data suggest that Florida’s home prices are right about where they should be ignoring the boom and bust, though some extraordinary circumstances remain and the dynamics of the real estate market in Florida are not quite back to business as usual. 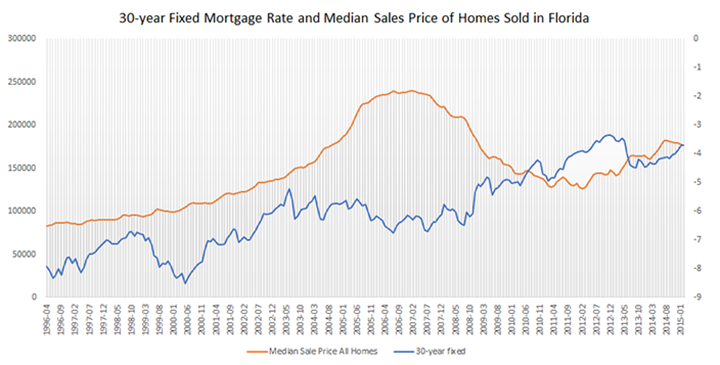 Source: Board of Governors of the Federal Reserve, Zillow, and S&P Dow Jones Indices LLC

Understanding the current real-estate climate is a good start, but one will not get far without considering the relationship between home prices and interest rates. This relationship is fundamental in nature; indeed, when one considers purchasing a home it is the interest rate on a loan that determines how much one will actually pay in present-value dollars. Present-value is the value in the present of a sum of money, in contrast to some future value it will have when it has been invested at compound interest. As such, interest rates have long been used in theoretical home-pricing models by economists[5]. However, in a working paper at the National Bureau of Economic Research, economists Glaeser, Gottlieb, and Gyourko show evidence that “(o)ver the long 1996-2006 boom, (interest rates) cannot account for more than one-fifth of the rise in house prices[6].” This conclusion was determined after empirical analysis, hence data from this time period seems to confirm this theory. This may not come as a surprise to those familiar with the housing boom, as other factors have been suggested as the catalyst to the dramatic rise in home values. For example, some believe that mortgage approval criteria and down payment requirements became more relaxed during the years leading up to and during the boom. With respect to these possibilities, Glaeser and his co-authors offer some data suggesting that this may not be the case either, though they do admit that the empirical results are far less robust than in the case of interest rates. For example, they report that mortgage approval rates were 78% in both 2000 and 2005, but admit that if the quality of loan applicants had decreased substantially over the 6-year period then this does not necessarily imply that approval criteria remained constant. Though a more thorough study on the topic could be done, for now we will simply conclude that such factors as relaxed mortgage approval criteria and down payment requirements likely contributed to the boom and bust in some way, and that interest rates were not the primary cause. But even a paper as skeptical as Glaeser’s offers a 20% correlation between interest rates and home prices, and timeframes involving assets bubbles often do not accurately represent the relationship between endogenous factors seen in more normal times, so how will interest rates affect home prices in the near future?

Since the housing bust, realtors surveyed each month the National Association of Realtors (NAR) have consistently reported that tight credit conditions and loan processing delays have hindered sales, particularly for first-time home buyers[7]. In October 2012, one respondent reported that buyers with a credit score of over 800 were not able to secure a loan[8]. As of March 2015, most realtors reported that conditions had improved slightly, with “(a)bout 49 percent of REALTORS® providing transaction credit score information reported FICO credit scores in the range 740+, down from about 59 percent in August 2013[9].”The responses given by the surveyed real estate practitioners can also be verified by the data seen in Figure 3. Though the sharp decline in mortgages could arguably come from lack of demand rather than tight credit conditions from lenders, respondents to the NAR survey certainly help to verify that it is in fact the latter. Moreover, Figure 3 offers data from 3 MSAs in Florida, thereby confirming that the tight credit conditions reported at the national level are in effect in Florida. Still, both sources confirm that lenders may be loosening their purse strings, albeit slightly. 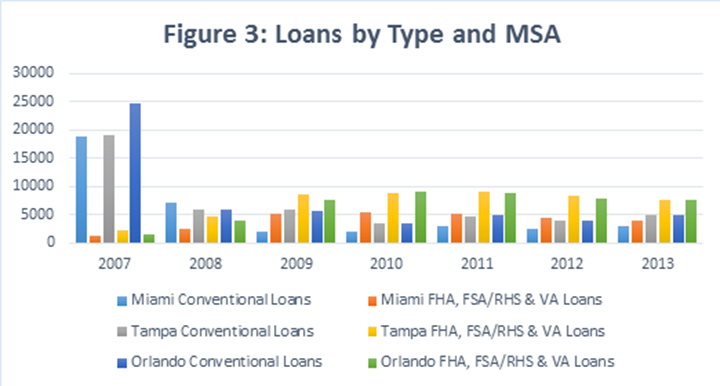 Given the difficulty buyers have faced with obtaining a loan in the past few years, it seems likely that many would jump at the chance to be able to purchase a home even if it were at a slightly higher interest rate. Therefore, if lenders continue their current trend of easing requirements for mortgage applicants then the demand for homes would likely be inelastic relative to interest rates in the short-term. Elasticity refers to the degree of responsiveness in supply or demand in relation to changes in price. If a curve is more elastic, then small changes in price will cause large changes in quantity consumed. If a curve is less elastic, then it will take large changes in price to effect a change in quantity consumed. Additionally, a slight increase in mortgage interest rates spurred by the Fed raising the federal funds rate would still leave rates near historic lows, as seen in Table 1. Perhaps the real concern with any rate hikes from the Fed is the strain it would put on the bank’s liquidity; however, with the supply of shadow inventory declining and the long-term increase to the money supply afforded by Fed’s quantitative easing (QE) policy, it seems reasonable to think a small rate hike won’t put too much strain on lenders. Also, there is another advantage gained by the decline in shadow inventory. When a home is owned by a bank or in foreclosure, there is a far less likely chance that any maintenance or repairs will occur. In contrast to this, homeowners are likely to make repairs, and especially perform routine maintenance, such as mowing the lawn and raking the leaves[10]. These aesthetic improvements can help increase the value of homes as well, keeping home values on their current trend.

Source: S&P Dow Jones Indices LLC and the Board of Governors of the Federal Reserve

Finally, Figure 4 demonstrates instances in which interest rates and home values rose together, which occurs if potential home buyers view an increase in interest rates as the start of a longer-term trend. Since rates are so low at present, it is likely that such an increase at present would be viewed as such—much like it was in mid-2013, when the S&P/Case-Shiller 10-city inflation-adjusted index rose 6.2% and the 30-year fixed mortgage contract rate rose 5.39% over a 5 month period. Considering all of these factors, it would appear that homeowners need not worry about any decisions coming from the Fed at present. As to the effect of Fed actions on the stock market, however, investors must decipher that for themselves.