As is well known, Florida is generally long on lower skill jobs and short on higher skill jobs. The only high skill occupation groups where Florida has a larger than national employment share are legal and healthcare-related occupations. The state economy is particularly long on jobs related to serving retirees and tourists: sales, food preparation and service, and office and administrative support. While the state is historically was long on both construction occupations and installation, maintenance, and repair occupations, and these pay slightly better than average, they are associated with the low skill, tourism and retiree growth, path.

To quantify the differences between Florida’s job structure and the nation’s, it is important to clarify what we mean by “low skill” jobs.

To quantify the differences between Florida’s job structure and the nation’s, it is important to clarify what we mean by “low skill” jobs. Wages vary between locations for many reasons, many of which have nothing to do with the quality of an area’s job structure. For example, workers will be willing to do the same job for lower pay when the cost of housing is lower or amenities that increase the quality of life are higher. Such factors are balanced by the interaction of supply and demand in labor markets. To compare job structures across locations in terms of skill, we value each job at its national average wage.

The Occupational Employment Statistics (OES) program of the Bureau of Labor Statistics measures occupational wages and employment for nearly 800 occupations available down to the level of Metropolitan Statistical Areas (MSA). Combining information across all individual occupations in this data indicates that the real relative wage of Florida’s average job was 2.9% below the national average in 2008. 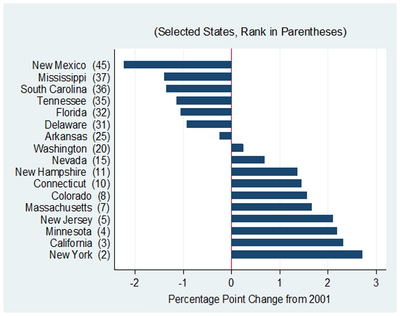 Figure 1 shows the change in the overall state job skill index for selected stated from 2001 through 2008. The states selected provide a useful comparison group. Nevada shares some of Florida’s heavy reliance on tourism. The southern states are geographically nearby. If Florida aspires to attract high skill jobs, it will have to emulate states like Massachusetts, Connecticut, Colorado, New York, New Jersey, Minnesota, California, Delaware, New Hampshire, or Washington, at least in so far as those states have done things to grow and attract such jobs. 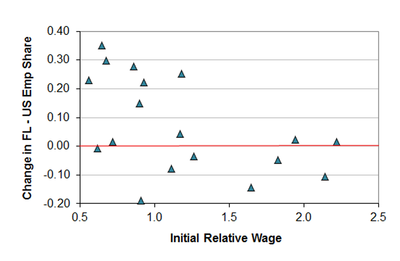 The second possibility is that relative national wages could have risen in occupations abundant in Florida and fallen in occupations scarce in Florida. Indeed, the relative returns to the most skilled workers have risen over time. Since Florida is short on these kinds of jobs, this also contributed to the decline in Florida’s relative job skill over this time. This is not random bad luck—pay declining in a lot of occupations that Florida happened to have in abundance. Rather, it is part of a large and systematic polarizing shift in the labor market, but is not specific to Florida.