Will Florida Become the New Mississippi?

In 1997, gross state product (GSP) per non-farm payroll employee in Mississippi was 30% lower than in Florida. Few analysts back then, if asked, would have projected Mississippi to match Florida fifteen years later. In 2012, however, by that measure of labor productivity the magnolia state was one percent ahead of the sunshine state. More realistically, given how hard it is to measure value added, the two states were essentially the same. Over the 15 years, output per worker rose 76% in Mississippi, more than three times Florida’s 22%.

In both Mississippi and Florida, GSP per payroll employee in 2012 was only 87% of the U.S. average. As shown in Figure 1, Florida’s relative productivity peaked at 95% nearly two decades earlier in 1993 and seems to have trended down since. For those concerned about the state’s future, it matters whether the decline is a trend likely to continue, a new lower level that will stabilize, or a temporary aberration that will soon reverse course. Of course no one knows for sure, but it is important—for policy makers, for business people, and for other residents—to assess the likelihoods of various intermediate-run outcomes: low, middle, and high. 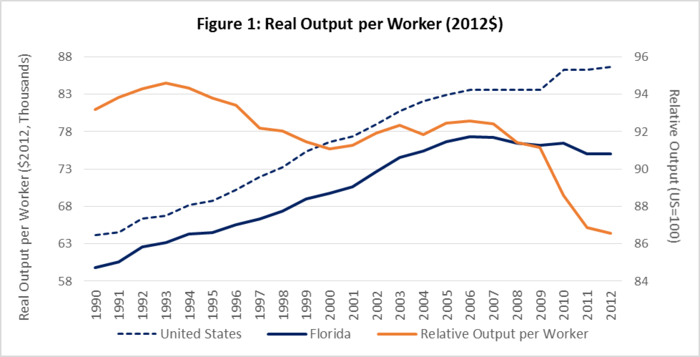 The decline in Florida’s relative labor productivity probably has several causes. Moreover it is likely that they interact. Possibilities include: the focus on occupations and sectors that serve retirees and tourists; the low college graduate share of the work force; the scarcity of local energy resources; and a tax structure (no income tax, narrow sales tax base, low sales tax rate, high effective property tax rates leading to relatively high business taxes) that does not raise enough revenue to adequately fund investments in education and infrastructure while also discouraging business investment.

We hope to analyze some of these possibilities in future notes. For now however, we focus on whether the striking decline in relative productivity since 2009 reflects Florida’s stage, compared to the nation’s, in recovering from the Great Recession. Is that sharp decline merely temporary or will it turn out to be longer lasting? To that end, we introduce a conceptual distinction that is often made between cyclical and structural changes in the economy, especially in the context of changes in the labor market. An important cyclical indicator is the unemployment rate—have we recovered sufficiently from the Great Recession so that most of those are actively looking for jobs are able to get them? The economy’s productive capacity is normally thought of in structural terms. Of course, in practice it is not easy to completely separate one from the other—a severe recession can do lasting damage to the ability of the state’s economy to produce goods and services and generate income for its workers and business owners and their families.

As shown in Figure 2, as of early 2014 Florida’s economy has recovered significantly from the cyclical low of the Great Recession. By the end of 2013, Florida’s unemployment rate (the ratio of residents age 16 and over actively looking for work and not finding it to the sum of those looking for work and those that are employed) was down to just over 6%, a bit below the national rate, after having been over 11% from late 2009 through 2010. While the unemployment rate in Florida was below 5% for a portion of the 1990s and 2000s, it was above 5% for most of the 1980s and 1990s. In terms of generating enough jobs to employ those looking for work, Florida’s economy would appear close to recovered. The national economy shows generally the same pattern. 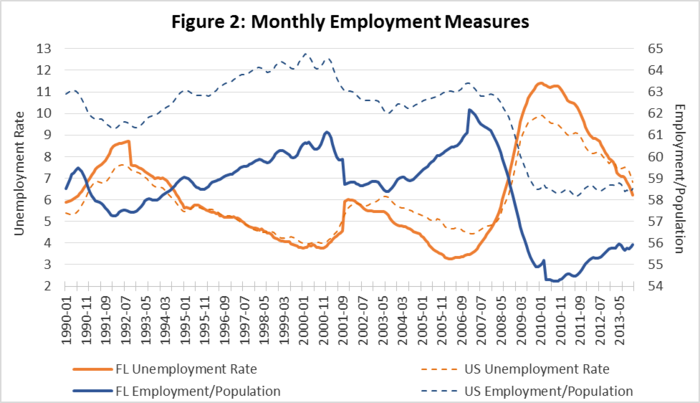 This does not mean economic output has returned to the prerecession level or trend. Florida’s real GDP in 2012 was $672 billion (2005 dollars), just below its 2005 level, and real GDP per capita was $34,802 (2005 dollars), just below its 2002 level. In part, this is because a smaller share of the population is working. As shown in Figure 2 (right axis), Florida’s employment to population ratio (for the population age 16 or over) had recovered from a low just above 54% in late 2010 to almost 56%. But it had been at or above 58% for all but 32 months of the 22 years from 1987 through 2008—corresponding to periods following other economic downturns. This is partly explained by the fact that at just over 6% the unemployment rate remains a bit higher than it was for much of that period. But, more importantly, the labor force participation rate—the proportion of the population (age 16 or over) that is either employed or reports actively looking for work—is down, averaging 60.05% in Florida in 2013 compared to 62.6% from 1987 through 2008. 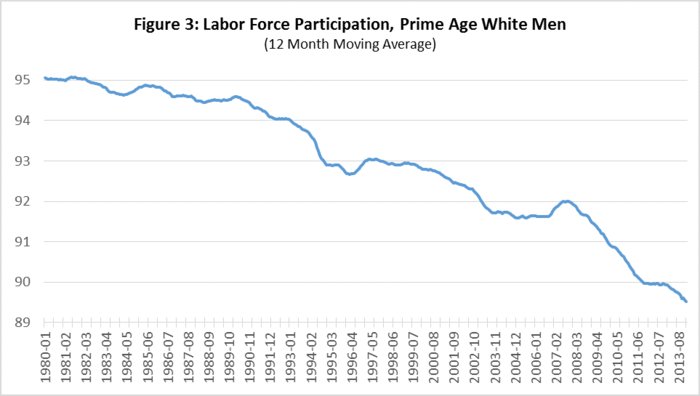 Trying to separate cyclical from structural declines in labor force participation, while conceptually appealing, is practically difficult and can be misleading. For example, workers who lose jobs at 62 and can’t find suitable employment might retire even though they had planned to work until 67. Similarly, more workers may qualify for disability because they are unable to find a job that accommodates their disability, when they would have found such a job and been part of the labor force in better economic times. Some of the increase in retirement and individuals on disability may be incorrectly called structural rather than cyclical if we insist on classifying them one way or the other.

How much of the decline is due to demographics and pre-existing trends and how much represents ill effects of the recession is an open question. As this recent paper from Shigeru Fujita at the Federal Reserve Bank of Philadelphia shows, both are likely important. Moreover, the two interact, with the recession exacerbating the loss in routine jobs due to labor market polarization, as discussed here by Maria Canon and Elise Marifian at the Federal Reserve Bank of St. Louis. Thus, even the component of the decline in labor force participation related to the business cycle may represent, effectively, a permanent decline in economic potential—absent a major change in national economic conditions.

Like the decline in labor force participation, the decline in output per employee and average job skill in Florida relative to the nation can be traced, at least in part, to labor market polarization—more details about which may be found in our paper Low, Declining, Polarizing: Job Skill in Florida. Because Florida’s economy is heavily dependent on retirees and tourists, jobs lost are disproportionately replaced by low skill jobs. Related, Florida’s younger workers are less likely to have a bachelor’s degree relative to older workers in Florida and to their national counterparts—especially Florida’s young men.

Looking ahead, the increase in demand for low skill jobs in Florida due to retiring Baby Boomers moving to the state together with the tendency of high skill jobs to be drawn to areas that already have lots of high skill jobs due to agglomeration economies means that, absent major investments in education and infrastructure, this trend of declining relative productivity is likely to continue. As we discuss in more detail in Tougher Choices: Shaping Florida’s Future, a report recently released by the LeRoy Collins Institute, we don’t expect such changes to be forthcoming. Simple extrapolation from Figure 1—always prone to error and so best thought of as an illustration of what might credibly happen under current conditions and trends rather than a prediction of what will happen—suggests value added by Florida’s average worker in 2030, when those age 65 and over will constitute over a quarter of the state’s population, will be only about four-fifths of the national average.

Judging by the unemployment rate, Florida’s cyclical recovery from the Great recession may be about as complete as it is going to get. But value added per employee is down in relative and absolute terms, that decline was exacerbated by the Great Recession, and there is no apparent reason to expect that pattern to change. Thus, one could argue Florida’s economy has recovered. But, productivity is not what it was before the recession and does not appear likely to be any time soon.

Does that mean Florida is on its way to becoming the new Mississippi? Perhaps, if output per worker is the gauge. But if per capita income is the yardstick, it’s not likely. Compared to Florida, Mississippi has too many children who are not direct income recipients, and too few retirees, also not counted in the work force but income recipients nonetheless. In Mississippi 21 % of the residents are under 15 and only 13% over 64, compared to 12% and 17% for Florida. Partly for those demographic reasons, and also because Florida’s retirees are more affluent, Florida remains far ahead of Mississippi in income per resident. Though Florida’s rank among the states from 1997 to 2012 slid from 20th to 27th, Mississippi remains firmly in control of last place. Moving forward from the Great Recession, the average Florida resident will clearly be more affluent than the average Mississippi resident, but it does not appear Florida’s average worker will be more productive.

[1] The views expressed herein are those of the authors and do not necessarily reflect the views of the Bureau of Economic and Business Research or the University of Florida.