The International Trade And ﬁshery Management Of Spiny Dogﬁsh: A Social Network Approach

The management of the spiny dogﬁsh (Squalus acanthias) is a matter of international concern, as this species was a candidate for inclusion in lists for trade regulation. The major demand for its meat is from the European Union (EU) market, with the U.S. and Canada as two major contributors. The U.S. has yet to support a spiny dogﬁsh listing, although the U.S. Atlantic stock (including Florida) is under a Fshery Management Plan (FMP) that proved to be successful in providing a certiﬁed sustainable ﬁshery.

This study employed a cumulative sum technique to compare trade data for frozen spiny dogﬁsh export from the U.S. and Canada to the EU in relation to the FMP adoption. The study also constructed a social network to visualize changes in the European trade scenario for spiny dogﬁsh after adoption of the FMP and to predict future trade ﬂow potentially affecting the conservation status of regional dogﬁsh stocks in relation to recent management measures introduced in Europe.

The social network analysis revealed that the exclusion of spiny dogﬁsh from trade regulation lists eventually will affect the conservation status of dogﬁsh stocks in Africa, Asia, South America, and the Mediterranean and Black Seas. Study results suggest that the species listing would provide an economic beneﬁt for the U.S. Northwest Atlantic ﬁshery, and will eventually foster the conservation status of other regional stocks worldwide and the search for a more sustainable global exploitation of spiny dogﬁsh. 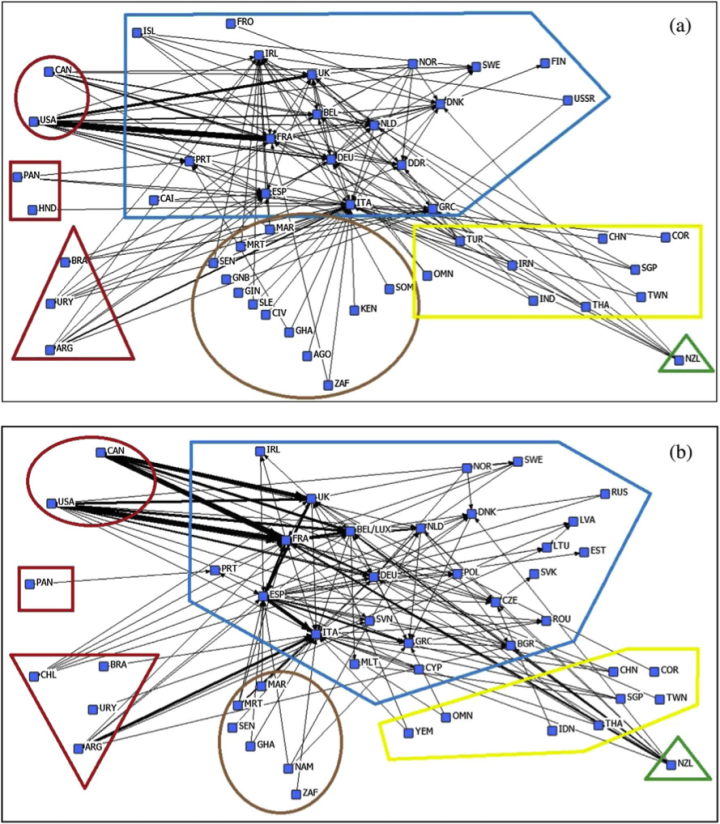 One-mode network for the pre-FMP period (1990 – 1999) in Fig a, and for the post-FMP period (2000 – 2010) in Fig. b. Nodes represent countries and edges represent link-relationships between countries based on quantities of dogﬁsh exported, with arrows pointing from the exporter to the importer country. Countries are displayed based on their geographical location: North America (red ellipse), Central America (red rectangle), South America (red triangle), Africa (brown ellipse), Asia (yellow rectangle in Fig.a and yellow polygon in Fig. b), Europe (blue polygon), and Oceania (green triangle).

The adoption of the U.S.-FMP for the Northwest Atlantic spiny dogﬁsh stock corresponds to signiﬁcant changes in the species international trade. As a direct result, Canada increased its dogﬁsh exports to the EU market appreciably, while U.S. exports declined because of planned management quota reductions. In light of the effectiveness of the US-FMP in achieving sustainability  for the Northwest Atlantic spiny dogﬁsh stock, and given the current state of the international exploitation and trade, global and local conservation status, the U.S. government would reap economic beneﬁt from the species inclusion in Convention on International Trade in Endangered Species (CITES’s Appendix II).

The network analysis also indicated that new areas increased exploitations to supply the EU market demand as U.S. exports declined, potentially affecting the conservation status of regional and local spiny dogﬁsh stocks in African, Asian and South American coastal areas. Although there is no directed ﬁshery for spiny dogﬁsh off South Africa, our results, and available information on the species biology and management regulations introduced in the Northeast Atlantic, suggest that the South African-Namibian coastal area may be a potential ﬁshing ground for dogﬁsh in the future. This ﬁshery should be considered for the employment of a management strategy prior to exploitation to ensure the ﬁshery is sustainable and will help preventing the species overexploitation.

Effective and successful management systems are based on ﬁnding the best trade-off between contrasting biological, socio- economic, and political objectives. The case for managing the international trade of spiny dogﬁsh shows that a major goal for managers should be to aim at integrating all these different aspects to effectively contributing to the analysis of risks related to global exploitation.

This study indicated that the employment of new analytical techniques, such as social network analysis of available trade data, can be useful in the discussion for implementing the ﬁshery management and international biodiversity protection.