Using The Semantic Web To Create Interdisciplinary Collaborations In Academia

Although with some controversy[1], interdisciplinarity has been a consistent emphasis across American academic institutions in the last several years, from Offices of Research in major universities to federal research funding agencies such as the National Science Foundation[2]. The issue of how to promote or create interdisciplinary research teams, however, is still very much open to discussion. Social science research on network interventions offers some insights on this problem. A network intervention is a program that leverages social networks to promote behavioral change in a population or enhance individual or collective performance in an organization[3]. Network interventions are an increasingly popular subject in the study of social networks, although most applications of this notion deal with the health sciences, management and marketing. The Bureau of Economic and Business Research and the UF Clinical and Translational Science Institute recently explored the idea of network interventions on a network of scientific collaborations. In this case, intervening on a social network means adding missing links —creating collaborations that improve the overall performance of the network or result in productive interaction. We studied the feasibility of this idea, called alteration in the social network literature, by designing an intervention that identified and connected researchers in specific locations of the University of Florida’s scientific collaboration network.

This project used VIVO, a semantic-web application adopted by UF, which ingests and integrates data from diverse sources to create searchable online profiles for people, organizations, events, grants, publications and other entities at the university[4]. We queried VIVO data to construct the network of all the collaborations that resulted in a publication or an awarded grant at the University of Florida in 2012. We then applied a number of structural criteria to identify dyads and triads of unconnected researchers in this network, whose collaboration would have enhanced certain structural properties of the whole university structure. Finally, BEBR conducted an online survey to contact the identified potential collaborators and explore their attitudes towards actually working together.

Induction vs. alteration of collaboration networks. A scientific collaboration network may respond in different ways when new conditions, such as new funding opportunities, arise. Existing connections may be activated —scientists who are already collaborating or have collaborated in the past start a new project. Or new connections may arise —scientists who have never worked together before start a new project. The former is the usual outcome, as researchers are typically more likely to find collaborators among people they already know in their work environment. As a consequence, the traditional way of funding academic research may have limitations, especially when it comes to promoting interdisciplinary research. In fact, the traditional way of funding research is a form of intervention comparable to what has been called induction on social networks[5]. Induction stimulates interaction among people who are already connected, and accelerates the diffusion of specific information or behaviors in the existing network of a population or organization. In the typical research funding process, agencies solicit applications for projects on specific topics from any researcher or research team. The process addresses the existing collaboration network as it is, and increases the volume of professional interactions along already established collaborative links. Although there may be requirements about the investigators, for example collaborators may be required to belong to different colleges, funding is not targeted to specific areas of a scientific collaboration network —in fact, funding agencies have normally no exact knowledge of the network from which they are trying to obtain proposals. Scientists typically respond to these funding opportunities by finding close and safe professional partners, mostly replicating existing collaborative relationships or establishing new collaborations within their professional comfort zone. When new connections are generated, they mostly close gaps within already well-established collaborative clusters. In this process, link formation is left to the “natural” evolution of the network, with no strategic intervention to add specific collaborative links at certain locations. In particular, the traditional way of funding research rarely creates connections that span structural holes between separate areas of the network[6].

The idea of alteration on a scientific network is different. A program of alteration uses knowledge from the whole scientific collaboration network to identify specific individuals whose collaboration is more likely to be successful and to enhance desired properties of the whole organization. These individuals are approached, introduced to each other, and pilot projects are presented to them to work on a proposal together. In this way, specific links are added between specific collaborators and teams, on the basis of their position in the structure of the network. Figure 1 illustrates the difference between traditional induction and the alteration approach on the scientific network of the University of Florida. Although Panel B’s links in the figure, detected by an alteration program, enhance certain structural properties of the organizational network and improve its general performance, they are very unlikely to be spontaneously established by individual researchers. The intervention of an external agent with a bird’s-eye view of the network is the only way these specific collaborations may ever occur.

Exploring scientific network alteration. Using specific structural criteria and optimization algorithms on the UF scientific collaboration network, we identified 123 dyads and 25 triads of disconnected researchers that were suitable targets for an alteration program. Alteration would ideally create the missing links in these dyads and triads, for example, by offering targeted small grants for a pilot project to be proposed and implemented by each of them. Our aim was to study the potential for an alteration program to be implemented at the university level. Using VIVO online profiles, our survey introduced each respondent to her or his potential collaborators in each identified dyad or triad. The survey then asked questions to investigate the respondent’s attitudes and thoughts about actually starting a collaboration with the proposed partners. The survey was sent to 254 respondents overall.

The survey results showed the value of the data that can be obtained from VIVO or similar semantic-web research networking tools. The publication and grant networks that we generated from VIVO provided an accurate map of the actual collaboration network at UF. Individuals who appeared as disconnected in the VIVO networks had actually never collaborated in the past. In addition, distances in the network predicted actual similarity in people’s work, and people’s familiarity with each other’s research. Scientists who were disconnected but two steps apart in the network turned out to be much more familiar with each other’s work than scientists who were disconnected and five steps apart. This effect held at higher distances: scientists who were five steps apart were still more aware of each other’s work than scientists who were ten steps apart. This means that network methods, together with VIVO’s data, can be used to construct a meaningful “map of science” of a university’s research activities: Distances in this map approximate actual distances in the contents of individual research; cCohesive communities in the map approximate actual clusters of close research activities, similar for methods and substantive topics. Such a map is potentially very useful for any program of intervention, coordination, and strategic planning of research.

The survey results provided insights about how to actually implement an alteration program. First, scientists’ distance in the network should be taken into account, since it increases researchers’ skepticism towards a possible collaboration. This means, for example, that the incentives offered to start a collaboration should be higher as the targeted individuals are more distant in the network. Ten links is probably a critical distance threshold, since for longer distances the percentage of researchers who are optimistic about the success of their collaboration falls well below 50% (Figure 2). On the other hand, collaborations are easier to create between individuals who are closer than five steps in the network. Second, alteration programs should probably try to create only specific kinds of collaboration. Researchers who don’t know each other are clearly more reluctant to start collaborating on a grant or patent than on a publication. This likely suggests the existence of a trust problem. Patents and grants have financial implications that require more mutual trust between collaborators, therefore people who do not know each other may be less inclined to work together on a patent or a grant. On the other hand, people are definitely more optimistic about starting a new collaboration by working on a publication. 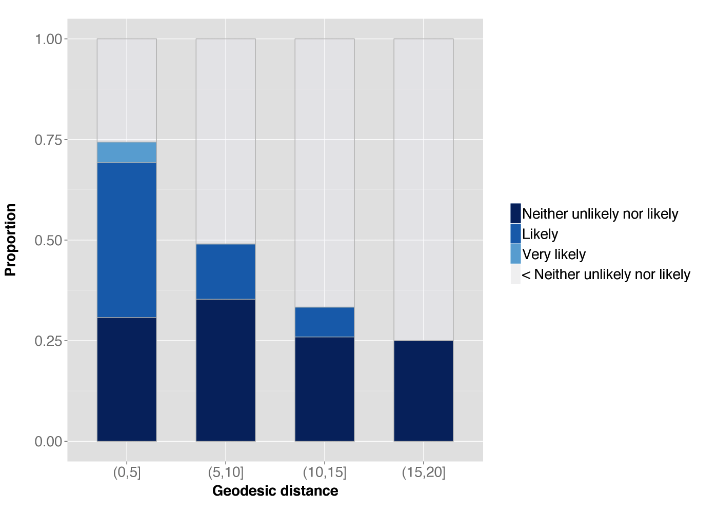 Figure 2: Proportions of responses to the question: “What is the likelihood that a collaboration between you and person X would be successful?”, by range of geodesic distances (number of network steps) spanned by the suggested collaboration. Possible answers: “Very likely,” “Likely,” “Neither unlikely nor likely,” “Unlikely,” “Very unlikely.”

While our experiment was bounded to a single university, the alteration approach can potentially be adopted at much larger scales. The same network criteria that enhance cohesion or interdisciplinary collaborations in a university network can straightforwardly be applied to a collection or consortium of universities. In this respect, the development of semantic-web research networking applications like VIVO is very promising. VIVO is adopted not only at the University of Florida, but in other American universities as well. As such, VIVO does not only provide reliable public data on single universities; it also creates a common platform that standardizes data from different universities and ensures interoperability across databases from different sources. VIVO, and similar semantic-web applications, are powerful tools to open up academic research to the Big Data era.

[1] Jacobs, J. A. (2014). In Defense of Disciplines: Interdisciplinarity and Specialization in the Research University. Chicago ; London: University Of Chicago Press.