Floridians’ Views on the European Union and the Transatlantic Partnership

In addition to being one of America’s most important allies in foreign policy and partners in the global fight against terrorism, the European Union is the largest trading partner of the US, with EU-US trade accounting for more than a quarter of global trade. More specifically, the EU (European Union) is the largest source of foreign direct investment in Florida, supporting more than 174,000 jobs 2015.[1] In an effort to understand the extent to which Floridians feel informed about the EU and how they view its’ role both as a strategic partner, for the USA and as an independent actor on the world stage, the Center for European Studies (CES) at the University of Florida worked with the Bureau of Economic and Business Research (BEBR) to survey Floridians on a variety of EU related topics. Support for this project was provided by the Getting to Know Europe (GTKE) program of the European Union Delegation in Washington DC. The survey was implemented utilizing the framework of the monthly BEBR Consumer Sentiment Survey, in which approximately 500 adult Florida residents are surveyed by telephone.[2] The results of the survey, including both a descriptive and statistical assessment, are presented below. They suggest that while there is a fair amount of knowledge about the EU among Floridians, there are clear differences across age groups, income levels and educational backgrounds. Among those who identify as having at least a little information about the EU, there are significant differences across party lines as well.

As might be anticipated, respondents with a higher level of education believed that they knew more about the European Union, with more than 26% of those with a post-graduate education responding “a lot” and only just over 14% at this level responding “none”. In contrast, among those with less than 16 years of education (generally a completed BA/BS degree) an average of just 5% claimed to know “a lot” about the EU (Figure 1).[4]

Figure 1: Knowledge of the European Union by Level of Education 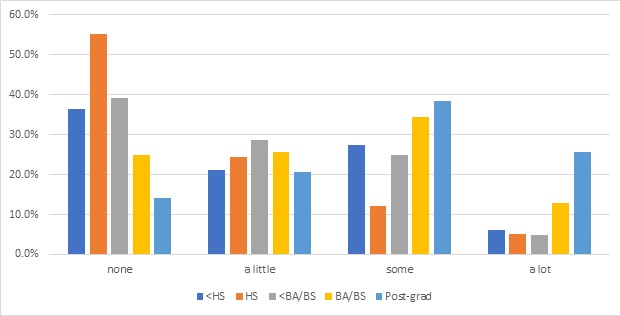 Age was also positively correlated with self-perceptions of EU related knowledge. Of those in the 18-25 category, only 24% claimed to have some or a lot of knowledge regarding the EU, while for those between 46 and 55, nearly 40% felt that way (Figure 2). In part, this result may be because younger respondents will not have had the time to complete higher levels of education and gain additional exposure to the European Union. On the other hand, we might expect youth to be more aware and globally engaged. Instead those above 36 years old tended to feel more informed.

Figure 2: Knowledge of the European Union by Age 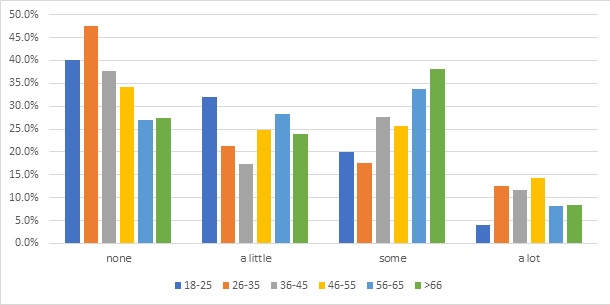 Figure 3: Knowledge of the European Union by Income Level

Figure 4: Knowledge of the European Union by Gender and Party Identification

The respondent’s ethnic identity also appears to be correlated with their self-perceptions of EU related knowledge. Respondents were asked two questions related to ethnic identity. A stand-alone question asked if respondents were “of Spanish or Hispanic origin,” while a second question asked “what race do you consider yourself” and offered respondents the choice of White (Caucasian), Black (African American), Asian or Pacific Islander, American Indian or Alaska native, other, or mixed. Both those who identified as being of Spanish or Hispanic origin in the former question and those who identified as Black/African Americans in the latter were notably less likely to claim “a lot” or even “some” knowledge (Figure 5).[5]

To gain a better understanding of the descriptive results discussed above, an ordered logistic analysis was conducted, with ‘level of knowledge of the European Union’ as the ordinal dependent variable and age, income and level of education as ordinal independent variables, while ethnic identity, gender and party identification were included as categorical independent variables (Table 1). For the most part, the interpretations suggested by Figures 1-5 are upheld by the statistical analysis. Both the level of income and age are positively correlated with a higher level of self-perceived knowledge of the EU at above the 90% confidence level. Being male and having a higher level of education are also positively correlated with higher levels of knowledge at the 99% confidence interval. The negative correlations between those of African American and Hispanic ethnic identity and self-perceptions of knowledge are also upheld at the 95% and 90% confidence level respectively.

Figure 5: Knowledge of the European Union by Ethnic Background

For the 313 respondents who claimed that they had at least ‘a little’ knowledge of the EU, a series of six follow up questions were asked regarding the importance of the EU-US relationship, cultural affinity between the EU and the US, and the global role of the EU. The general pattern that emerges reflects some similarities to the previous question about EU knowledge. As respondents increased in age, income and levels of education, they were more likely to hold more positive views of the EU and EU-US relations. In addition, both Democrats and Independents had more favorable views of the EU than Republicans.

Figures 6-9 show the percentage of respondents in each category who responded favorably to the six survey questions regarding the importance of the EU.[6]

There are some notable differences across the six questions as well as between groups. The statement least likely to receive a positive evaluation from respondents, regardless of their individual characteristics, was that the EU and the US shared many cultural attributes, while the importance of the EU as a trade partner for the US received the broadest level of support (Figures 6-9).

Figure 6: Favorable View of the Importance of the European Union by Age

Figure 7: Favorable View of the Importance of the European Union by Income Level

These results are supported by the statistical analysis as well. Once again, an ordinal logistic analysis was utilized because of the character of the dependent variable (seven point Likert Scale). The full results of the analyses for all six questions is presented in Table 2. Across the board higher levels of income were associated with more favorable evaluations of the European Union. Increased age and levels of education were also strongly and positively correlated in most cases, with the exceptions being the EU’s role as a leader on climate change (for age) and the importance of the EU as a partner for the US in the fight against terrorism as in trade (education). Overall gender was not significant, except in the case of assessments of the EU as an important trade partner, in which case men were more likely to agree.

Figure 8: Favorable View of the Importance of the European Union by Level of Education Figure

9: Favorable View of the Importance of the EU by Gender and Party Identification

The statistical analysis also highlights the very important role that party affiliation may play in determining respondent attitudes concerning the importance of the European Union as a partner of the US and as a global actor in general. While Figure 9 suggests that Republicans were across the board less favorably inclined than Democrats or Independents, the results of the logistic analysis suggest that Democrats were significantly more likely to respond favorably to questions about the EU’s role in all cases except as a partner in the fight against terrorism and cultural affinity. Independents viewed the EU as an important partner in foreign policy and trade only. The partisan dimension is particularly interesting as it was a not a significant determinant of perceived knowledge of the EU (discussed above).

Overall the results of this survey suggest that more needs to be done to educate Floridians about the importance of the EU as both a partner for the US and as an independent actor. Moreover, it is clear that future efforts should be aimed at the K-12 level as well as the university level and should target both lower income and ethnic minority groups to increase broad understanding of the importance of the transatlantic relationship.

[2]To participate in the survey respondents must be 18 or older and living in a private residence in Florida. The sample is RDD (Random Digit Dialing) Cell Phone, with sample purchased from Marketing Systems Group. A minimum of five attempts per record is made, and interviews are conducted in both English and Spanish. Surveys are conducted between 9am and 9pm Monday through Friday, between 12pm and 6pm on Saturdays and between 3pm and 9pm on Sundays.

[3]In the first question respondents could choose between four answers (“none,” “a little,” “some” or “a lot”) in addition to “don’t know” or decline to answer. In the remaining six questions respondents were asked to select a level of agreement on a Likert scale ranging from 1=strongly disagree to 7=strongly agree and could also respond “don’t know” or decline to answer.

[4]Interestingly, those with less than a high school level of education were more likely to claim knowledge than those who had completed High School, though the number of respondents in this category was comparatively small at just 33.

[5]There were very few respondents who classified themselves as anything other than White or Black in the second question so only these groups have been included in this analysis to ensure results are statistically reliable. All those who answered “yes” to the former question are also included here. It should be noted that there were some who self-identified as being of Spanish/Hispanic descent who also identified as White in the second question – these individuals are counted in both categories in Figure 5.

[6]Responses to all questions used a seven point Likert Scale ranging from Strongly Disagree (1) to Strongly Agree (7). Respondents were considered to have a favorable response if they answered, 5, 6 or 7 on this scale.