By greater than a two-to-one margin, conservative voters in Florida strongly agree that Governor Scott should “keep his promise” that he would issue “an executive order prohibiting discrimination against gay and transgender state workers and contractors” following the Pulse nightclub attack in Orlando in 2016.

A representative sample of 1,410 conservatives, all registered to vote in Florida, was designed by Department of Political Science faculty at the University of Florida. The telephone surveys were conducted by the University of Florida Bureau of Economic and Business Research Survey Research Center from February 1-28, 2018. The study was funded by a grant from the Gill Foundation. The dual-frame telephone survey, reaching conservatives on their landlines and cellphones statewide, has a +/- 4.1% margin of error.

A supermajority of these conservative voters—79.2%—say that Governor Scott should “keep his promise” to issue an executive order prohibiting discrimination against gay and transgender state workers and contractors. Only 9.0% of respondents say that the governor should “forget about his promise,” a smaller percentage than those who said they did not know or refused to answer the question. These self-identified conservative voters—nearly all of whom are registered Republicans—strongly support the governor. Of the nearly 1,250 conservative respondents who’ve heard of Rick Scott, 57.6% say their opinion of the governor is “mostly favorable” and another 24.4% say their opinion of him is “very favorable.” Over 90% of all the respondents in the University of Florida survey cast ballots in the 2016 General Election, according to official voting records.

The survey of conservative, mostly Republican voters indicates strong support that Governor Scott should keep his promise to LGBT state workers and contractors across gender, income, education, importance of religion in one’s life, and if the respondent voted in the 2016 General Election. As shown in Figure 1, the only significant gap in favorable responses on this question is across gender: 86% of female conservatives—compared with 74% of male conservatives—think the Governor should keep his promise. Support is also slightly higher among younger conservatives. More importantly, there is majority support within each demographic group that the Governor should keep the promise he made after the Pulse nightclub tragedy. 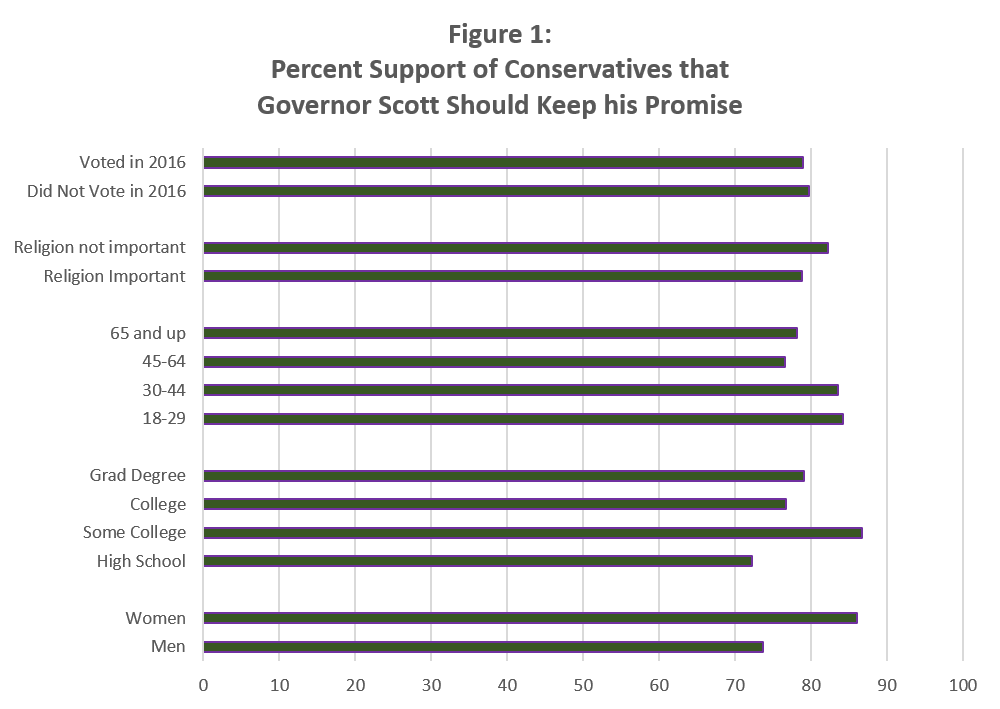 Professor Daniel Smith, co-PI of the survey, expressed surprise with the results:

“We know that broad public support for policies protecting the LGBT community has increased over the past several decades. That Florida conservatives want Governor Scott to keep his promise following the Pulse nightclub tragedy speaks volumes about how out of touch the governor and Republican state lawmakers are on this important issue of equality and fairness.”

About the Authors of the Study

Professor Daniel A. Smith’s research focuses on voting and elections in the American states, including the effects of political institutions on political participation, particularly in Florida.