Arts and Wellbeing Indicators Project: Assessing the Associations between Arts Participation and Community Wellbeing in Florida

Arts participation has been widely, yet largely anecdotally, associated with health since ancient times. However, direct association between the arts and wellbeing have only recently begun to be quantitatively assessed.

In 2015-16, the State of Florida Division of Cultural Affairs supported a project, in partnership with the University of Florida (UF) Center for Arts in Medicine, to explore and establish indicators for assessing the associations between arts and cultural participation and community wellbeing in the State of Florida. In that year, a team of investigators from the Center for Arts in Medicine and the UF Department of Epidemiology developed a set of indicators and conducted initial pilot testing. The team went on in 2016-17 to refine the indicators, test them in three Florida counties, and develop a statistical model for analyzing primary and secondary data sets. This article presents the project’s pilot study, which was conducted in partnership with the UF Survey Research Center.

The pilot survey was designed to test a set of ten questions that could potentially be used to collect primary data intended to associate arts participation with well-being at the community level. A comprehensive literature review was conducted and surveys with similar objectives were assessed. The questions aimed to evaluate health, arts, and social capital generally, and life satisfaction, number of poor health days, arts engagement, informal creative activities, and access to arts in Florida communities, specifically.

Ten questions were created and interviews were conducted with 500 people, which fit within models of sample size statistical validity. The cell phone sample was purchased from the Marketing Systems Group and professional interviewers conducted the telephone surveys from November to December 2015. A minimum of five attempts per record was made, and a respondent was considered eligible for the interview if they were at least 18 years of age and lived in a private residence in Florida. Interviews were conducted in either English or Spanish between 9am and 9pm Monday through Friday, between 12pm and 6pm on Saturdays, and between 3pm and 9pm on Sundays. Each survey took approximately 12 minutes.

Two questions were used to assess for participation in arts either as a formal or an informal activity for the past year prior to the survey. The questions were: 1) “In the past 12 months have you attended or participated in any arts activities in or near your community?” (Arts activities may include attending any performances of live music, dance or theater, or visiting museums or art galleries) and 2) “In the past 12 months, have you participated in any hands-on creative activities such as playing an instrument, dancing; sewing or quilting; carving or model-building?” (These might include playing an instrument, singing, dancing, sewing or quilting, carving or model-building, painting or drawing, creative writing, furniture-making, or any other art or crafts activity, either on your own or in a group). Both questions could be answered as “yes” or “no”.

Two variables were used to determine the health of the respondent which was the main outcome of interest: 1) a self-reported health rating where respondents were asked to rate their health with the question “In general, would you say your health is excellent, very good, good, fair, or poor?” A two-level health rating variable was created which consisted of excellent or very good or good and fair or poor; and 2) satisfaction with life assessed with the question “On a scale from 1 to 5, where 1 is extremely dissatisfied and 5 is extremely satisfied, how satisfied are you with life nowadays?” Response options were extremely dissatisfied, dissatisfied, neither satisfied or dissatisfied, satisfied and extremely satisfied. A three-level satisfaction with life variable was created which consisted of satisfied, neither satisfied or dissatisfied and dissatisfied. Several covariates were also assessed, including age, gender, race, employment, marital status, education, emotional support, access to arts, and overall quality of life in the community.

The model presented in Figure 1 illustrates that when all other variables in the model were adjusted for, participation in art activities was significantly associated with life satisfaction. Respondents who had been involved in some form of art activity were more than two times more likely to report being satisfied with their lives as compared to those who did not take part in any art activity. 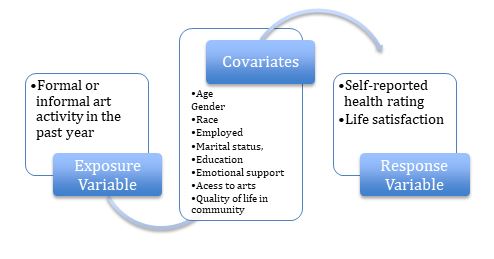 These results demonstrated that a short survey could feasibly be used to associate the arts with wellbeing at the community level. They also served to help refine the indicators significantly and to develop a single survey that is currently being used for collection of all the primary data necessary in the application of the Indicators (see Figure 2). 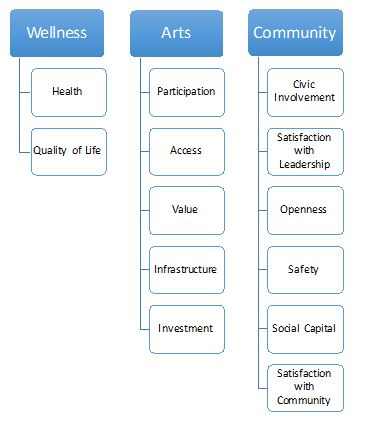 This survey utilizes the ten tested questions, along with validated NIH PROMIS and WHO measures, and takes approximately 7-9 minutes to complete. In the current year, the team will test the statistical model in three additional counties and develop a toolkit to guide use of the Indicators by health, public health and arts organizations in Florida and beyond.

TABLES:Impact of the arts on health (CSI Results)