Differing Perceptions of Climate Change and Global Warming Among Floridians

As a sub-tropical state, Florida is particularly vulnerable to adverse weather events and other negative products of climate change such as increased incidence of vector-borne diseases and decreased citrus production, which will have major consequences for the health of Floridians and for Florida’s economy.

What is the opinion of Floridians about climate change? And do those opinions vary depending on the wording of the question, “climate change” vs. “global warming”? This study attempted those question using a telephone survey with an embedded experiment.

The questions in this study were added on to the University of Florida Survey Research Center’s monthly Consumer Sentiment Survey. The Center used random digit dialing of possible landline numbers in the state of Florida and asked a short series of questions about their opinions of their personal financial situations and the U.S. economy.

Figure 1 shows a time series of mean responses for the question “How concerned are you about [global warming or climate change]”.

Figure 1: Mean responses of “How concerned are you about [global warming or climate change] over time (YYMM) on a Likert Scale 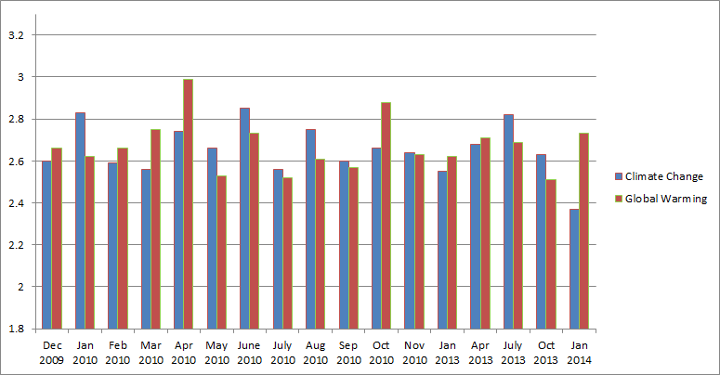 Generally, concern is uniformly distributed between groups, with the exception of October 2010 and January 2014, where respondents were significantly more concerned about global warming than climate change, with mean differences of -0.22 and -0.36, with p<0.05 and 0.001, respectively. The values between 2.5 and 3 indicate that respondents are more “somewhat concerned” than “not very concerned” about global warming and climate change, and that, qualitatively, this concern has not changed much over time. No mean value reaches 3.0, though April 2010 comes close with a mean concern value of 2.99 for the global warming group.

When asked how much they personally worry about global warming or climate change, the mean responses for both groups generally fluctuate between 2.05 and 2.35, indicating that Floridians, do not personally worry much about the phenomena (Figure 2).

Figure 2: Mean responses of “How much do you personally worry about [global warming or climate change] over time (YYMM) on a Likert Scale 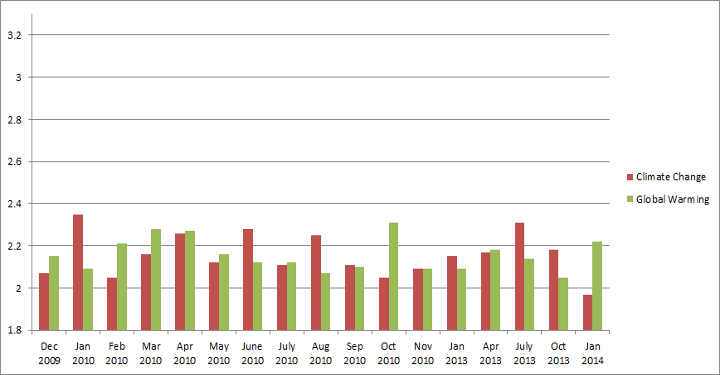 Respondents were then asked the extent to which they agree with the statement: “Most scientists believe that [climate change or global warming] is occurring.” Figure 3 shows the time series of the mean responses by age group.

Figure 3: Mean level of agreement with the phrase “most scientists believe that [global warming or climate change] is real” over time (YYMM) on a Likert Scale 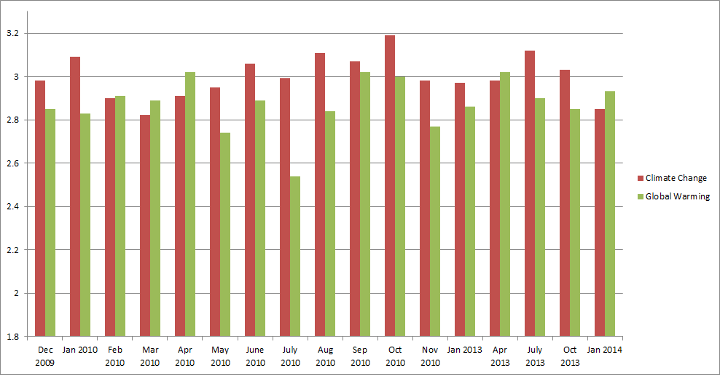 Figure 4 shows the time series for responses for the question “how likely is it that you will be personally affected by [climate change or global warming]?”

Figure 4: Mean responses of “How likely is it that you will be personally affected by [global warming or climate change] over time (YYMM) on a Likert Scale 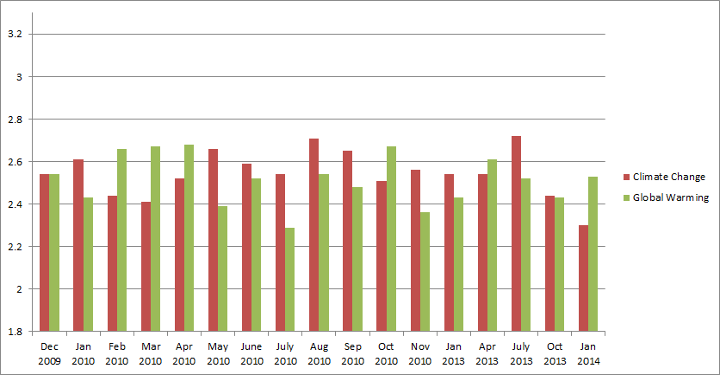 Qualitatively, there is no clear trend in agreement for either group of respondents, though between January 2010 and April 2010, respondents asked about global warming consistently felt more likely to be personally affected than those asked about climate change. Additionally, the global warming group’s perceived likelihood to be affected was consistently lower than those in the climate change group between April 2010 and September 2010. The mean responses for both groups fluctuated between approximately 2.3 and 2.7.

Respondents were then asked “How likely are you to make changes in your personal behavior due to [climate change or global warming]?”

Figure 5: Mean responses of “How likely are you to change your personal behavior in response to [global warming or climate change] over time (YYMM) on a Likert Scale 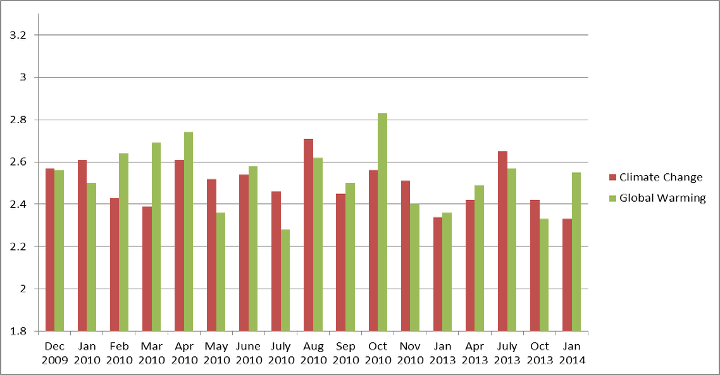 Those who were asked about global warming were significantly more likely to change their behaviors in March 2010, October 2010 and January 2014 (p<0.05, 0.01 and 0.05, respectively). Qualitatively, however, both curves seem to fluctuate around 2.5, indicating that overall people are neutral in their opinions.

In January of 2014, the values for all questions in the climate change group decreased from previous months. Of note, the mean score for “how much do you personally worry?” decreased from 2.3 in August 2013 to 2.2 in October 2013 to less than 2.0 in January 2014. Similarly, the mean score for “how likely are you to be personally affected by climate change?” dropped from above 2.7 in August 2013 to 2.3 in January 2014.

How do our findings compare with studies at the national level?

Brody et al [2] used geographic information systems to predict proximity-based vulnerability of respondents to sea level rise, and found that respondents living in 100-year flood plains had lower perceived risk of climate change than those who don’t. They also found that weather and living in a location with a history of natural disasters as documented by damage to property and crops had positive but weak correlations with perceived risk of climate change.

Despite Florida’s increased vulnerability to the effects of climate change, Florida’s state government has gone to great lengths to deny climate change’s existence and its threat to the wellbeing of the state and its citizens A Florida Department of Environmental Protection employee was reportedly placed on administrative leave and mandated to visit a psychiatrist before returning to work because he used the phrase “climate change,” the use of which has been banned by Governor Scott.[3]

NOTE: The monthly data sets from the Consumer Sentiment Survey were aggregated into a larger dataset. Weights for county and age groups according to the 2010 United States Census statistics were applied in each phase of analysis in order to appropriately control for seasonal fluctuations in population demographics due to snowbirds, as well as general sampling and response biases among age groups and hard-to-reach counties. Data mining and analysis were performed using SAS 9.3. Descriptive statistics for each question were calculated for each month. T-tests and Chi-Squared tests were then performed to assess the significance of the difference of means and relative frequencies of continuous and categorical covariates between the “climate change” group and the “global warming” group for each question. Analysis of variance (ANOVA) with a Tukey correction was run to examine within-group variation within the same month between years and adjust for multiple testing. Results were considered significant with p-values less than 0.05.