Scientific research and discoveries play a major role in shaping our daily lives. The results of this research can be seen in the tremendous advances in medicine, technology, and many other fields over the past decade. Previous studies on public attitudes towards science have been conducted on a national level by federal governments in the US and UK. However, it is unclear what Floridians think about science and its impact on their daily lives.

The UF Survey Research Center surveyed 504 Floridian respondents by phone in July 2016 about their knowledge and opinions of scientific research and discoveries by asking them a series of nine questions on this topic. Our primary aim was to gain a better understanding of the public’s perceptions of science.

Most Floridians felt fairly well informed about scientific research and discoveries. A little more than a quarter of Floridians (26%) believed that they were not very well informed and roughly one in six people (17%) said they were very well informed about these topics. Chart 1 examines the relationship between respondents’ education level and how informed they felt about scientific research and discoveries. We found a statistically significant relationship between education level and how informed respondents felt about science. Floridians with higher levels of education reported being more informed about these topics. These findings are not surprising due to the traditional role that universities have played in introducing students to scientific research and discoveries. However, they suggest that additional efforts are needed to share research findings with the public outside of university settings.

Chart 1: How well informed do you feel about scientific research and discoveries? - by educational level. Source: BEBR Phone Survey, July 2016. 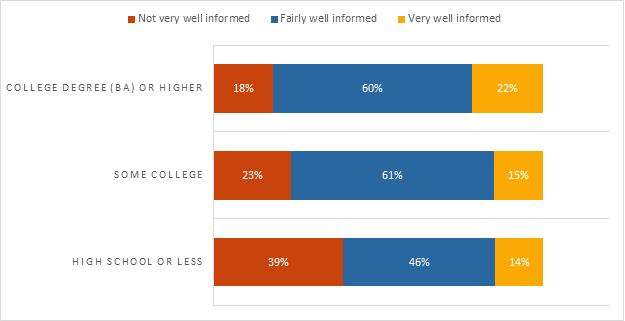 The most common sources mentioned by Floridians for hearing about new scientific discoveries were websites (61%), movies or TV (48%), and newspapers or magazines (46%).. Less than 10% of Floridians said they heard about these findings directly from scientists (8%) and almost one in four reported reading about them in scientific journals (22%). This finding reveals that the public has extremely limited access to scientists’ traditional channels for disseminating their research findings. It also provides examples of other popular sources that scientists and universities could utilize to share their findings with the public.

Chart 2 examines at the relationship between respondents’ education level and their sources of scientific knowledge. We found statistically significant differences by education level in whether or not respondents heard about scientific discoveries directly from scientists, websites, movies or TV, newspaper or magazines, books, scientific journals, and people at work. We also found that men report seeking information from websites at a significantly higher rate than women. These findings highlight how differences in education shape what channels people use to learn about scientific discoveries. Scientists and universities could use this information to more effectively share their research findings with a broader cross-section of the population.

Chart 2: From which sources do you normally hear about new scientific discoveries? - by education level *denotes that finding is statistically significant. Source: BEBR Phone Survey, July 2016. 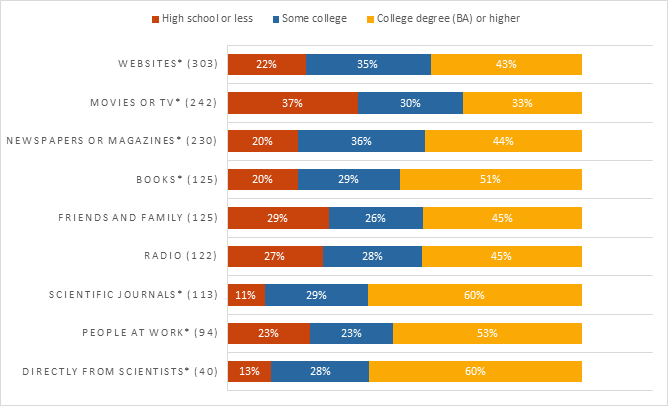 Most respondents (73%) reported that they have been personally impacted by scientific research. There was a strong correlation between respondents’ education level and whether or not they reported being personally impacted by scientific research, which is shown in Chart 3. This finding further highlights how educational level shapes public attitudes towards science. The most commonly reported positive impacts were advances in medicine and health (52%) and technology (17%). Many Floridians also discussed the value of general knowledge of discoveries (19%) and shared their belief that scientific research affects nearly everything in their daily lives (15%).

Chart 3: Do you think that you have been personally impacted by scientific research? - by education level. Source: BEBR Phone Survey, July 2016. 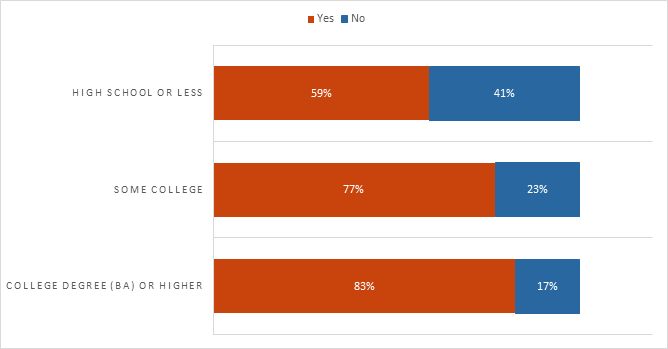 Roughly a third of Floridians (32%) also said that they have been personally impacted by UF Health, the health care network associated with University of Florida, formerly known as Shands. The majority of Floridians who reported being personally affected by UF Health discussed the general medical care that they or someone they know received (55%). Of these respondents, 57% referenced their own medical care, 39% discussed care provided to a family member, and 8% talked about the care provided to their friends and colleagues. Many respondents also shared personal anecdotes on how UF Health’s research (14%) and resources (12%) have improved their general health and/or medical care. They also acknowledged broader impacts on their lives and future medical care for all patients (6%). Some respondents also mentioned affiliations to UF Health through work (8%) and education (5%).

This study has three main findings about Floridians’ opinions on scientific research:

·Floridians see great value in scientific research and would like to learn more from scientists themselves.

·Levels of interaction and knowledge dissemination between scientists and the public are currently quite low. However, Floridians have a strong desire for increased public engagement.

·Education shapes many Floridians’ knowledge about and views of scientific research and discoveries.

These findings suggest that funding agencies and universities need to encourage and incentivize scientists to engage with and share their peer-reviewed scientific results with the public. Doing so will require increased funding from state and federal agencies for these types of activities. In addition, universities will need to provide scientists with communication training. This will help scientists translate their findings and peer-reviewed publications for a broader audience and utilize different channels (websites, movies/TV, newspapers/magazines, and social media) to share their research with the general public.