The 2017 holiday shopping season is expected to give a boost to the U.S. economy. One positive factor is the calendar: The early Thanksgiving date allows 32 days between Thanksgiving and Christmas, with a full weekend right before Christmas Day.

Holiday shopping is not just about gifts. Overall estimates of holiday expenditures include costs of decorations, greeting cards and postage, candy and food, and flowers.

AlixPartners predicts holiday retail sales growth of 3.5 to 4.4 percent[1], while Deloitte forecasts growth of 4 to 4.5 percent[2] and the National Retail Federation (NRF) expects an increase of 3.6 to 4 percent.[3] 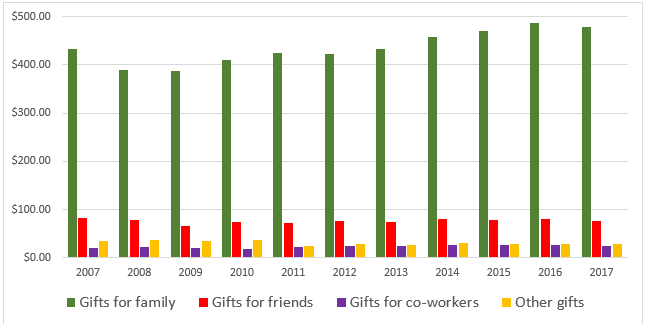 * Figures from the National Retail Federation.

In Florida, the Florida Retail Federation (FRF) anticipates that those spending increases will be a bit more modest, perhaps 3 to 3.5 percent,[4] due to the negative impact of Hurricane Irma which left some Floridians dealing with property damage or lost workdays. Consumer spending accounts for 75 percent of Florida’s gross domestic product, and thus is particularly important in the Sunshine State.

The holiday shopping season is vital, supplying 20 to 40 percent of Florida retailers’ annual sales. Florida’s retail businesses employ 2.7 million Floridians, or one out of every five jobs. Florida retail sales benefit from the tourism industry, since foreign tourists consider Florida a shopping destination, part of what makes our state an attractive vacation spot.

2017 marks a milestone in Americans’ purchasing patterns. For the first time in the history of the National Retail Federation’s consumer survey, a majority of shoppers (59 percent) said they would be shopping online. Indeed, Adobe Digital Insights reports that American shoppers spent a record $5.03 billion in 24 hours on Black Friday 2017 alone. That figure surpassed predictions and marks a 16.9 percent increase in dollars spent online compared with that day in the 2016 shopping season.

Online retail giant Amazon reported that Black Friday orders were rolling in "at record levels," with over 200,000 toys sold in just the first five hours of that day. Some experts estimate that consumers who plan to shop online are planning to spend about 70 percent more than in-store-only shoppers,[5] making them a particularly lucrative audience.

There are some differences in the traffic and revenue among online shoppers. Consumers are using their smartphones for browsing, almost the same as on a computer. However, sales revenue is higher on the traditional computer, perhaps because shoppers wary of online frauds are using a computer for purchasing big-ticket items due to perceptions of better security.

A survey conducted in September by Forbes found respondents reporting that they will spend 6% more this holiday season than they did last year, splitting their purchases 50/50 between online and in stores.[7] Shoppers said that the in-person experience allows them to browse for gifts, try on clothing, or find out more about products.

One group is especially fond of brick-and-mortar shopping: Young Gen Z consumers (age 13 to 16) said they look forward to in-store holiday shopping because of the fun experiences, special events, holiday lights, and in-store specials. It remains to be seen whether this trend will persist as this cohort ages, or whether their preferences will shift in response to adult responsibilities.

Holiday retail activity relies on an influx of new and temporary employees. Similar to last year, Amazon said it would hire 120,000 more workers in the U.S. for this holiday season to work at the 75 fulfillment centers nationwide—picking, packing, and shipping the deluge of holiday orders. Amazon also said it expects to convert thousands of positions to full-time jobs.

Several U.S. retailers, including Macy’s and Kohl’s, have been concentrating on the online components of their businesses and have ramped up hiring seasonal workers to staff their distribution centers. Target said it would hire 100,000 temporary workers, but Wal-Mart plans to oﬀer existing workers more hours rather than adding seasonal workers.[8]

Will the uptick in holiday shopping lead to improved economic conditions, or will the benefits dry up once the Christmas trees hit the curb? Only time will tell. But the NRF survey revealed one very positive data point regarding the economy: Only 27 percent of consumers said that their holiday spending would be affected by concerns about the nation’s economy, down from 32 percent in 2016 and marking the lowest level since the NRF survey began asking that question in 2009 during the Great Recession.

For now, both consumers and economists seem very merry indeed.