Each month, the UF Survey Research Center (UFSRC) interviews about 500 randomly selected Floridians by telephone about their current economic status and expectations for the future in order to generate a Consumer Sentiment Index. Because the federal government went into a partial government shutdown on the first day of October, we added a few items to the October 2013 questionnaire regarding the effect of the shutdown on various aspects of people’s lives. Since an agreement to end the shutdown was announced and approved by Congress on October 16, we divided our data into half at that point, looking at responses from interviews conducted before October 16, and those completed on and after that date. There were a total of 503 interviews, with at least 239 valid answers for every question in each half-month period.

One of the “null” findings of note is that nobody said that they had not heard of the federal government shutdown, not even interviews conducted in the first days of the month.

The first questions on the survey are the consumer sentiment items, including their perceptions of personal finances now compared to a year ago, expectations for a year from now, view of the nation’s economy, and whether it is a good time to buy big ticket household purchases. Immediately following those items, we asked about how the shutdown had influenced their own answers to the previous questions. Throughout the month of October, more than half of respondents (57.4%) said that the shutdown had affected their consumer sentiment answers. In the early part of the month, an effect was reported by 61.8%, dropping to 52.6% following the resolution of the shutdown. The percentage of those reporting a “major effect” remained steady even after the shutdown ended, 29.4% during the shutdown and 31.5% afterward. However, early in the month 32.3% found it to be a minor effect, which dropped to 21.2% after the shutdown was over. It should be noted that the reasons why people respond to a question is always complex and often subject to various influences, including social pressure when giving answers to another person, but these high levels of self-reported effects are of interest and may help explain declining consumer sentiment during this time of fiscal uncertainty and government dysfunction. 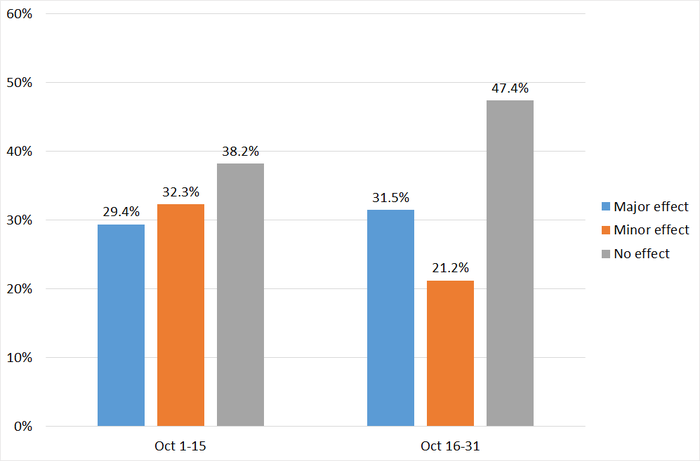 The next question was about the impact on the nation’s economy. The overwhelming majority of our sample (86.3%) thought that the shutdown was having an impact on the U.S. economy. It should be noted that our question asked specifically about “the federal government shutdown,” rather than the pending debt ceiling vote or possible default later in the month, other factors that affected public opinion. The percent of those predicting no effect increased slightly after the resolution, from 12.7% to 15.0%. However, of those seeing an effect, most thought it was a major effect, and that pattern persisted even after the resolution, with 51.6% saying “major effect” at the start of the month and 48.1% at the end.

Effect of Shutdown on US Economy 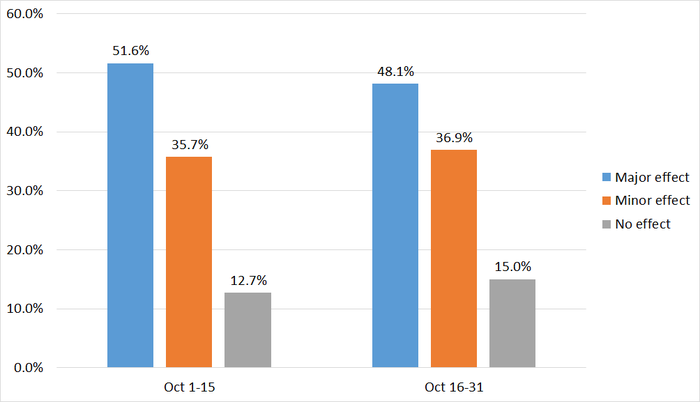 The answers to this item also varied by self-reported party identification, with 98.6% of Democrats reporting an effect on the U.S. economy, and only 75.5% of Republicans saying there will be an effect. Those reporting a “major effect” also differed, from just over a third (37.9%) among Republicans to over two-thirds (68.5%) among Democrats.

Effect of October 2013 Shutdown on  US Economy by Party Identification

The next question was about the impact of the shutdown on “your family income.” Overall, just over half (51.5%) reported an effect, and this was stable even after the government shutdown. It should also be noted that these responses reflected an individual’s perceptions about impact rather than the reality. For example, early in the month social security recipients worried about getting payments on time, but by mid-month it was clear that they would not miss a check. However, the lost income may be real and irreparable for service businesses dependent on federal installations, such as hotels outside national parks and restaurants serving lunch near federal buildings, 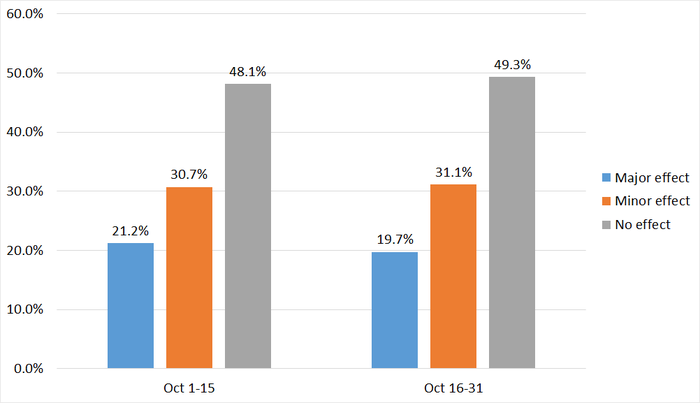 Finally, we asked about the impact on vacation plans. This is a non-trivial consideration in a state that counts tourism among its chief industries. Just over a third of respondents (39.8%) reported an effect on “your vacation plans,” a percentage that actually increased slightly after the shutdown ended. We had included this item because the October 14 Columbus Day holiday meant a 3-day weekend for some employees and families with school-aged children, and we expected to see some impact on their immediate plans if the shutdown lasted that far into the month. But the percentage reporting an effect actually went up slightly after the shutdown was over. We had asked only about “vacation plans,” not specifying whether those were upcoming plans or those in the future. Therefore, these data may indicate that some people may be changing their future vacation plans away from National Parks and choosing private options when available as a more reliable alternative. If so, this could impact future revenue generation at federally run recreation venues.

Effect of Shutdown on Vacation Plans 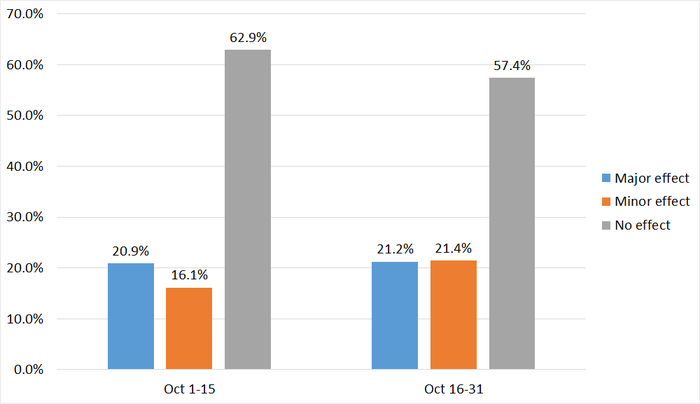 Once the shutdown ended on October 16, consumer sentiment did not rebound. While there was a 3-point increase in expected national economic conditions over the next year, expectations for the U.S. economy in the next five years declined 6 points, and the overall Florida Consumer Sentiment Index score dropped four points to 67. The UFSRC Consumer Sentiment Index for each respondent is calculated ranging from 2 to 150 using 1966 as the base.  In other words, the index was 100 in 1966. Numbers over 100 mean more optimism than 1966.  UFSRC has been surveying Consumer Sentiment in Florida since 1985; the highest index ever reported was 111 in August 2000, while the lowest was 59 in August 2008.

Table 1. Consumer Sentiment Before and After the Federal Government Shutdown

This decline may reflect a perception that the congressional action ending the October shutdown was just kicking the can down the road into 2014, not a definitive conclusion. It may also be influenced by another issue in the news: concern about requirements of the Affordable Care Act, including increased premium costs. In a few weeks we will know whether these late-October declines continued into November.