Happiness has become somewhat of a buzzword these days. Companies like Google, Johnson & Johnson, and Apple emphasize creating a culture of happiness among employees because they know these features are attractive to people and fuel their creativity. Several governments across the world have recognized the importance of happiness in social policymaking. Being happy impacts the quality of our relationships, our work productivity, and overall life satisfaction. Can happiness even affect how we feel about the communities in which we live?

Research shows that a major component of happiness is our genetic makeup. Researchers have found that between 33%–50% of individual happiness is determined by genetics [1, 2] . The remaining amount can be attributed to life events and life experiences such as the people we interact with, the activities we engage in, and the places we live and work. Our neighborhoods can provide an environment for socializing and engaging in leisure, both of which have been shown to be associated with happiness. But just how are individual and neighborhood attributes associated with happiness and how is happiness related to how we feel about our neighborhood?

In June, 2016, the UF Survey Research Center polled 500 Florida residents to learn more about happiness and sense of community within the neighborhood. Figure 1 displays the percentage of residents who reported being very happy by group. Those who were married (16%), lived in a single family home (17%), owned a home (22%), and had excellent health (29%) were more likely to report being very happy. Having children resulted in a slight decrease in happiness (5%). Age and income were associated with higher happiness levels but in a more complex way. Research shows that higher incomes generally result in higher levels of happiness – until a certain point. For example, researchers [3] found that money increased happiness until about $75,000 per year, and after that life satisfaction was not significantly impacted. Among residents in this sample, the findings were similar. There was no significant difference in happiness levels among those who made between $100–$150,000 and those who made more than $150,000 annually.

Sense of community (SOC) describes the social connections, mutual concerns, and values that exist within a community. Residents were asked to give their neighborhood a SOC rating. Results (Figure 2) were very similar to the happiness ratings. Those who were married (12%), lived in a single family home (9%), owned a home (12%), and had excellent health (22%) were more likely to report a high SOC rating. Having children resulted in a slight decrease in SOC (1%). 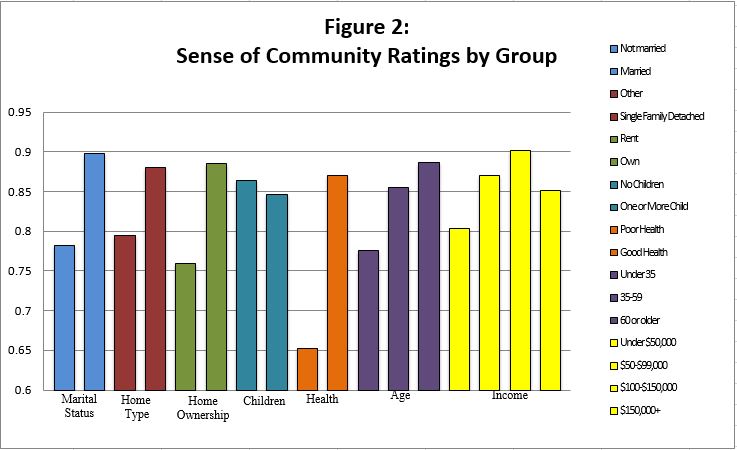 Existing research has found that individuals who have a strong connection to their community are happier [4,5,6], but do happy people seek out the social interaction and fellowship that are essential components of strong communities? According to the study sample, the answer is yes. In fact, Figure 3 shows that 94% of those with high SOC reported being happy or very happy with their lives. This high association indicates a powerful connection. Moreover, an analysis was performed to control for the effects of the demographic variables featured in Figures 1 and 2, and the results showed that happiness alone accounts for 7% of an individual’s SOC.

Decades of research has revealed that there are some qualities that happy people have in common. Among these are quality relationships with friends and family members [7,8]. This research suggests that happiness impacts more than just social bonds. Happy people are more connected to the neighborhoods in which they live. This sense of community contributes to social capital growth and has shown to be a catalyst for positive behaviors in the community such as volunteering and neighboring. This connection has implications for community planners, public health officials, and residents alike. Promoting happiness not only enhances individual aspects of our life, but it also impacts how we feel about our neighborhood community.

Source: The data for this article were collected in a June, 2016 Consumer Sentiment Survey of Florida residents conducted by the University of Florida Bureau of Economic and Business Research Survey Research Center.

Acknowledgement: The authors wish to thank Joshua Tippery for his assistance with survey administration and data collection. Banner artwork by Lorissa C. Porter.