Home Ownership in Florida: Why it Matters and What Floridians Think

Half of Floridians (50.1 percent) think it is a “good time” to buy a house according to a survey conducted by University of Florida researchers in October and November of 2016. About 19.3 percent thought it was a bad time while 30.6 percent were uncertain.

This positive outlook on home purchase comes during a time of record-low homeownership rate (the percentage of homes occupied by the owner). Florida’s homeownership rate reached a peak of 72.4 percent in 2006, right before the Great Recession.

A recently released report from the U.S. Census Bureau shows that as of 2016, the Florida homeownership rate has dropped 8 percentage points to 64.4, the lowest since the government started tracking in 1984.

Among the survey respondents who said that this is a good time to buy, the most common reason given was favorable interest rates (46.1 percent), a situation that might change in the months ahead as the Federal Reserve increases rates.  Other reasons are low home prices (18.7 percent), the availability of many homes (13.6 percent) and favorable economic conditions (12.4 percent).

Of those who thought it was a “bad time” to buy a house, unfavorable economic conditions topped the list (41.5 percent) followed by high house prices (31.1 percent) and difficulty qualifying for a mortgage (11.4 percent).

Opinions varied by gender, with “good time” chosen by 52.4 percent of men but only 47.2 percent of women. Positive attitudes increased with age: Only 37.9 percent of young adults under age 30 said “good time,” compared with 54.4 percent of those age 60 or older. 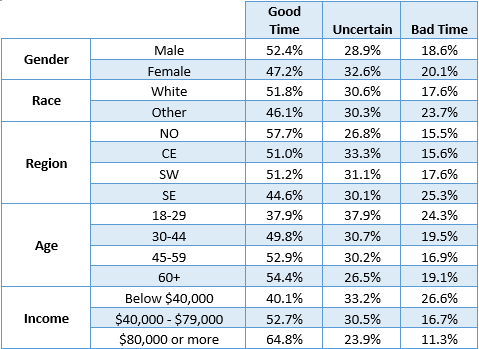 The purchase of a home depends largely on economic conditions and the purchaser’s lifecycle factors, such as forming a household or the exit of young family members from the home.

“Home ownership is seen as an important way to accumulate wealth and build assets over time, in particular among low-income and minority groups,” said Hector H. Sandoval, director of the Economic Analysis Program at UF’s Bureau of Economic and Business Research and an author of the study.

He noted that some Floridians may not have the means to invest in the stock market, but their home will likely appreciate in value over time, provides a legacy to the next generation and could be used as collateral for a loan in times of need.

Regardless of volatility in house prices and maintenance costs, owning a home is not only associated with personal financial gains, but it also benefits the community. “Homeowners have greater incentive to care about their community because their home values depend on both the physical characteristics of the house and the neighborhood,” Sandoval said.

Since World War II, home ownership has been considered part of the American Dream. Is that dream still alive in Florida? In the survey, 45 percent of Floridians strongly agreed (14.2 percent) or agreed (30.8 percent) that “owning a home is necessary to live The American Dream.” Over a quarter (26.8 percent) neither agreed nor disagreed while 21.4 percent disagreed and 6.8 percent strongly disagreed. 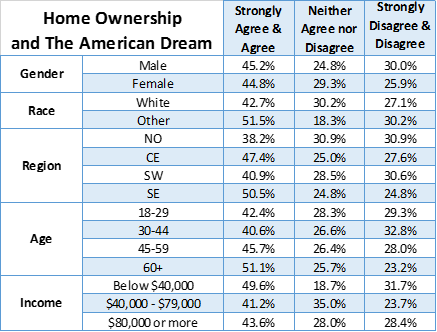 The survey sample included 362 non-owners who were also asked about their own likelihood of buying a house. Almost a third (32.3 percent) said they were unlikely to ever buy a house, while 10.8 percent planned to buy in the next year, 44.5 percent in the next five years and 12.4 percent in the next 10 years.

Non-owners expressed a variety of opinions about how much they thought about buying a home, with 22.7% saying it was a specific goal that they are determined to reach.

“Following the Great Recession, mortgage lending practices tightened,” Sandoval said. “Slow job growth together with the debt load of young adults, many of whom are paying down student loans, have prevented the entrance of new buyers to a rebounding housing market.”

Conducted Oct. 1 to Nov. 30, 2016, the UF study reflects the responses of 1,058 individuals who were reached on cellphones, representing a demographic cross section of full-time Florida residents. These analyses did not include those who were part-time residents or “snowbirds.”

For people in general, do you think that now is a good time or a bad time to buy a house?  Would you say…

Asked only of those who said it was a good time…

Please tell me the primary reason why you think this is a GOOD time to buy a house. Would you say…

3    There are many homes available on the market?

Asked only of those who said it was a bad time…

Please tell me the primary reason why you think this is a BAD time to buy a house. Would you say…

2    Mortgage rate are not favorable?

3    There are not many homes available on the market?

4    It is difficult to qualify for a mortgage?

5    Economic conditions overall are not favorable?

Question HOME3 Asked of those who do not own a home…

Now thinking about your housing.

Based on what you know right now, do you think you will buy a home….

Asked of those who do not own a home…

Would you say that owning your own home someday is…

1    A specific goal that you are determined to reach?

2    Something you think about a lot?

3    Something you think about sometimes?

4    Something you you don’t think about much at all?

5    Something you never think about?

Some say that owning a home is necessary to live The Good Life and The American Dream. Do you…

3    Neither agree nor disagree?