In 2009, Florida joined with 43 other states and the District of Columbia in the Common Core Standards Initiative, committing to developing a common set of academic benchmarks in math and the English Language Arts for elementary and secondary students in participating states. The initiative, which was convened by the National Governors Association and the Council of Chief State Officers, focused on developing standards that could be compared to those of other countries, while readying American high school graduates for college and the workforce. The standards were developed by teams of educators who drew on both education research and public feedback, and were adopted by the governors or education administrators of a majority of states shortly after their release in June 2010. While the federal government was not directly involved in the development of the Common Core standards, the competitive Race to the Top grants allocated additional points to states that adopted them. As a partnership among states, educators, private foundations, and the College Board, the Common Core initially received wide endorsement and little dissent when Florida and most other states adopted the standards in 2010.

Upon implementation, however, some parents and conservative groups became quite vocal in their criticism of the standards and their perception of federal intrusion on state and local schools’ authority to set their own education benchmarks, and social media are now littered with examples of “new math” that are attributed to the Common Core standards. A 2014 Gallup Survey found that a majority of Americans, including parents of school-age children, now oppose “having the teachers in your community use the Common Core State standards to guide what they teach,” though there was a significant partisan split on the question, as a majority of Democrats favored using the standards. Responding to public pressure, several states either delayed, defunded, or repealed the Common Core standards. In Florida, Governor Scott withdrew the state from a consortium that was developing the standards, while his predecessor and Democratic challenger, Charlie Crist, embraced the principles of the Common Core.

How much of the opposition to the Common Core is associated with its name? To find out, the UF Survey Research Center included a survey experiment in an October 2014 statewide poll, in which half of the respondents were asked one of two versions:

The idea of joining with other states to establish consistent standards received plurality support among likely voters who heard the question without the Common Core label. As shown in Figure 1, 42.9% of those voters thought that Florida should join with other states, 31.8% thought Florida should maintain its own standards, and 25.3% said that they hadn’t thought much about the issue or “don’t know.” Though there is significant opposition, joining with other states to establish high educational standards is appealing to a plurality of Floridians. 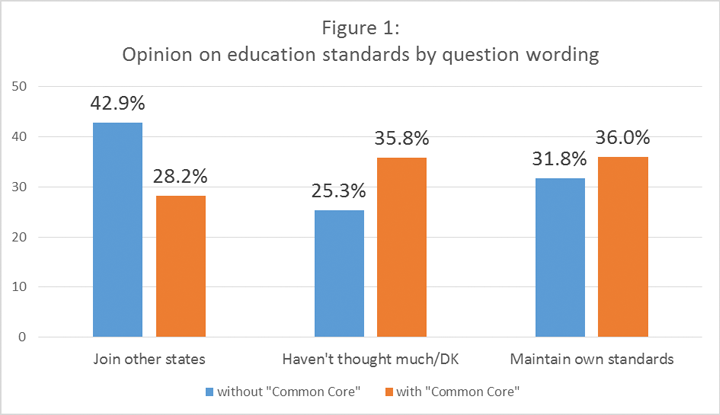 However, when asked with the Common Core label, support for cooperation with other states declines significantly. Among those respondents, only 28.2% favored joining with other states in the Common Core, a decrease of 14.7 percentage points from support with the unlabeled question. Somewhat surprisingly, the addition of the “Common Core” cue actually increased the proportion of voters who “haven’t thought much about the issue” (or didn’t know) by 10.5 points to 35.8%. Over a third (36.0%) of likely voters supported “opting out,” which was 4.2 percentage points higher than the equivalent choice of Florida maintaining its own standards offered in the unlabeled question.

As expected, the differences in responses attributable to question wording varies widely by level of education. Figure 2 shows that the Common Core label reduces support for joining with other states among respondents in all education categories, but the effect of question wording is mitigated among respondents with higher levels of education. Among college graduates, the difference between the two questions in support for joining with other states is 5.1 points. Among those who report some college education, the difference is 18.2 percentage points, while among those with no more than a high school degree, the difference is 29.9 points (though the sample size is fairly small in the latter category). College graduates apparently are more likely to recognize that the goals of the Common Core means joining with other states in establishing high academic standards, and they are not as likely to be swayed by changes in question wording. 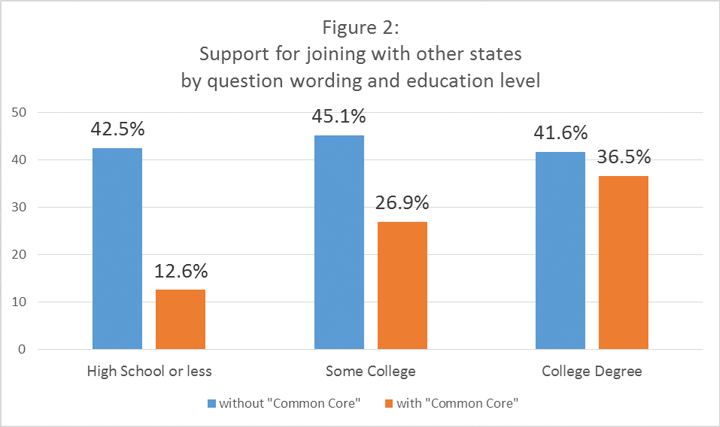 Reflecting the fact that much (though not all) of the recent criticism of the Common Core has come from conservative groups, Figure 3 shows that support for joining with other states is highest among Democrats and lowest among Republicans, with Independents in between. The question wording with the Common Core label lowers support for joining with other states among all three groups, but the effect of question wording is strongest among Independents, who showed a 21.9-point difference in opinion between the two questions. Republicans and Democrats had differences of 13.0 and 15.0 points, respectively. 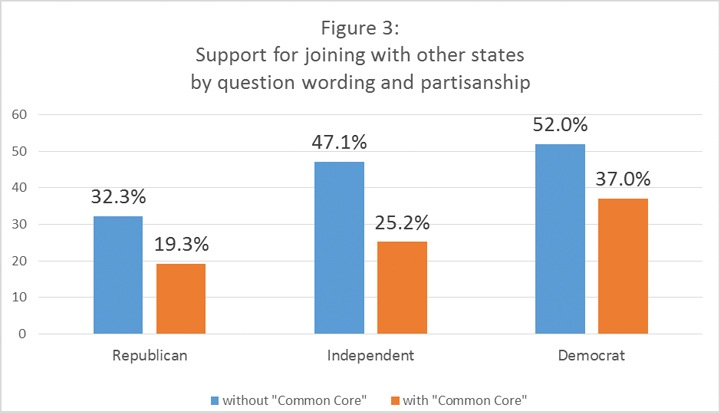 The question of whether Florida should cooperate with other states in establishing academic standards or whether we should maintain our own standards is an important one. After all, the governors and education administrators who put the Common Core on their states’ agenda did so out of concern that our students have the basic skills in math and language arts that would prepare them for their college curricula or for the workforce in a competitive global environment. It is also one of many issues on which the two major party candidates for Florida governor disagreed, so voters did have a real choice on this issue. Cues, such as party labels or elite endorsements, often help voters in developing their opinions on issues, but in this case, the addition of the label “Common Core” appears to have sown more doubt among many voters. Without that label, a clear plurality of Florida voters favor joining with other states to establish high academic standards, while with the label, a plurality of voters confess to not knowing enough about the issue to express an opinion. It is the responsibility of the campaigns and the media to discuss honest differences in such a way as to help, rather than hinder, voters to reach an informed opinion on important issues.

ACKNOWLEDGEMENT: Thanks to Daniella De La Campa for assistance with preparation.