Use of Urgent Care Centers and Hospital Emergency Rooms: A Cross-sectional Survey of Floridians

Emergency Department (ED) use has been increasing in the United States (US), with 136.3 million visits in 20111 making research into the risks for frequent ED use an area current interest. Despite the Affordable Care Act, ED use is increasing even though there has been a decrease the number of operating ED’s; this increased demand for EDs is cause for concern, because it is the most expensive venue for medical treatment.2

ED use is greatest amongst the homeless, nursing home residents, infants, elders, African Americans, and those with coverage under Medicaid and the State Children’s Health Insurance Program (SCHIP).3 Urgent Care Centers (UC) are increasingly utilized medical facilities with many of the same technical capabilities but do not have the same legal requirement to treat all patients regardless of their ability to pay and are generally not open 24 hours/day. UC’s have gained popularity in recent years among patients needing emergency medical care as a remedy for long wait times at EDs and overbooked primary care physicians.4

According to the Centers for Disease Control and Prevention, wait times for EDs in the US have increased from 46.5 minutes to 58.1 minutes.5 Long wait times in the ED are associated with sick patients leaving without medical care, and overcrowding. 6,7 General ED use has also been associated with patients’ lower educational attainment.8 Improved understanding of the factors associated with choosing to go to a ED vs UC will help to identify subpopulations for interventions to improve the cost-effectiveness of emergency medical care.

The survey questions in this study were added on to the March and July waves of the Florida Consumer Sentiment Survey (CSS), which is a monthly survey conducted by the Survey Research Center at the University of Florida’s Bureau of Economic and Business Research. In any type of survey, it is typical for certain demographic sub-populations to be over-or under-sampled due to different patterns of response. In order to account for this, we weighted the responses by county, sex and age so that our results are more representative of the distribution of Florida households based on population estimates BEBR calculates and which are accepted by the state and business community as the official estimates.

Respondents must have answered “yes” to the question: “In the past 12 months, have you sought emergency medical attention for yourself?” to be eligible to answer the remaining urgent care questions. Not all counties are necessarily represented in the overall CSS sample, and fewer counties are represented in this analysis because of the screening question.  Chi-square tests and analysis of variance were conducted with SAS Version 9.4 to test for significant differences in facility choice and wait time, respectively, by demographic characteristics.

The geographic coordinates for all hospital emergency rooms and urgent care centers (including freestanding emergency rooms) in Florida were downloaded as a shape file from the Florida Geographic Data Library (FGDL). Based on their coordinates, facilities were attributed to counties and overlaid on a county-level map of Florida also obtained from FDGL (Figure 1).

Figure 1: Per capita urgent care centers and emergency rooms in Florida by county 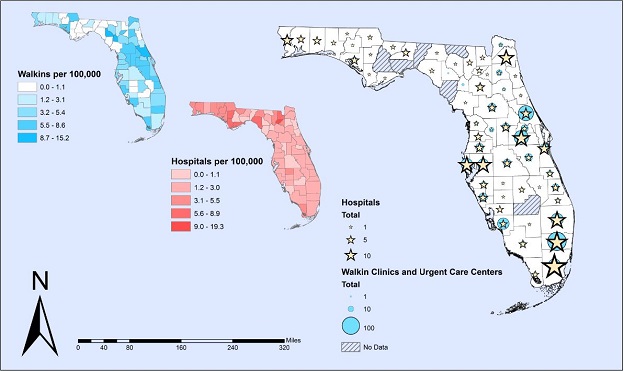 Figure 2 shows the weighted sample of Floridians who reported utilizing urgent care centers and hospital emergency rooms by county in this study.  Qualitatively comparing Figures 1 and 2, it appears that availability of a given type of facility does not necessarily influence respondents’ choice of facility when they most recently sought emergency medical attention for themselves. 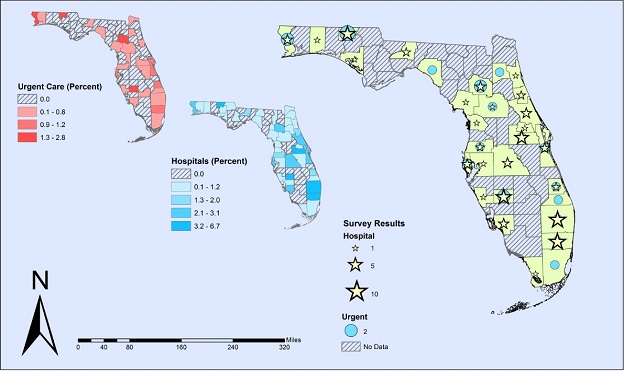 Table 1 presents respondent demographic and health-related characteristics by facility where they sought care.  Sex, age group, ethnicity, race and insurance status were not significantly associated with facility type, as determined by chi-squared tests.

It is well established that individuals with lower educational attainment tend to have worse health status than those with more education. People with worse health status may require tests or procedures that are unavailable at an urgent care center, or require admittance to the hospital, which could explain the association between education and facility choice.  Similarly, married individuals may be in better health status than their never-married or widowed/divorced counterparts because they likely have two incomes rather than one, and they have immediate support in their spouse who could help transport the patient during a medical episode that required urgent treatment.  Further investigations should work to tease apart the role that income and spouses play in health-seeking behavior. Interestingly, insurance status was not significantly associated with insurance status.

Urgent care centers are not under the same legal obligations as hospital emergency rooms to treat all patients who walk through the door, regardless of their ability to pay, so one would think that uninsured patients would be more likely to seek care from hospital emergency rooms than urgent care centers. Future work, including ethnography and qualitative interviews, should tease out the complicated relationship between health insurance and care seeking among those in need of immediate treatment.

One limitation to this study is that we did not collect information on the underlying medical condition that made the respondent seek care. There are some conditions that require immediate medical attention but are not life-threatening (e.g., a broken arm that needs to be set), and others that are life-threatening (e.g., heart attack). The clinical manifestation of disease is a major confounder to our understanding of health-seeking behavior in this population, and it is something that should be addressed in future work.  We also recommend that this survey be repeated over additional months to increase the sample size and the likelihood of reaching respondents who have sought emergency medical care in every county in Florida.